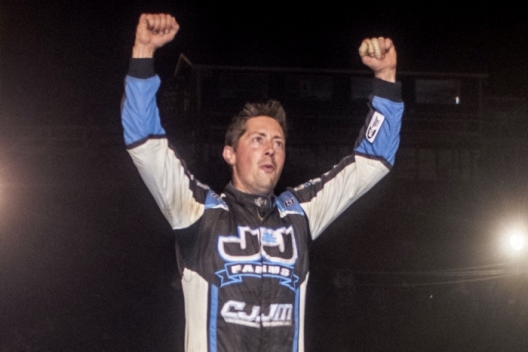 BECKLEY, W.Va. — One way or another, polesitter Jacob Hawkins knew he’d have to outrun fellow front-row starter Max Blair if he was going to capture Monday’s Beckley USA 100.

Flat tires forced Blair out of the lead after 30 laps, and while Hawkins led the final 70 circuits of the XR Southern All Star Series event at Beckley Motor Speedway, he eventually had to repel the rallying Blair’s last-ditch charge in the final laps for a career-high $20,000 victory on the Fourth of July.

Fairmont, W.Va.’s Hawkins said that “luckily I was just able to hang on. When things go you’re way, they do, and just thank God they're going my way right now.”

Winning his first race on the Alabama-based series that made its debut at Beckley, Hawkins took checkers 0.538 of a second ahead of Centerville, Pa.’s Blair while Zack Dohm of Cross Lanes, W.Va., who nearly pulled alongside the leading Hawkins with fewer than 20 laps remaining, settled for third.

Carson Ferguson of Lincolnton, N.C., whose midrace challenge included a lap-52 slide-job swapping battle that briefly (but unofficially) carried him into the lead before Hawkins went right back ahead, was fourth with 14th-starting Rick Williams of Beckley rounding out the top five.

Blair jumped into the early lead and kept Hawkins in check amid an early flurry of lapped traffic, but during the first caution period at lap 30 Blair, had to pit for a flat tire, then pitted again for a second flat during the same slowdown.

Hawkins inherited the lead and steadily fought off challenges from Ferguson and Dohm, who swapped the second spot multiple times while Blair was rallying from the rear, eventually breaking into the top five just past the halfway mark.

“It was nerve-racking the whole time, this deal, the whole 100 laps. You never really know where to be on the track. One minute I’m catching lapped cars and they’re kinda pulling me, so it’s definitely nerve-racking,” Hawkins said, thanking his volunteer crew.

"I knew (Blair) was good, because he was good early. I felt like we were gonna put on a good race and then I was worried when I heard the 111 (car of Blair) was restarting second. I knew he had tires that were probably 30 laps fresher than mine (and I was) definitely a little leery.”

Blair’s tires were fresher, but they weren’t the optimum rubber for making a charge.

"I think we had the car to beat tonight and, you know, just terrible luck. Luckily we were able to come back out and salvage a second-place finish,” he said. “I didn't even I didn't have the right spare tires (available), so we ended up putting way softer (spare tires) on because that's all all the legal tires I had for spares. I could go pretty good for a couple of laps, and just had to fall in line, and go for a couple of laps and fall in line.

“Man, I gave it my all there them last couple of laps. I thought maybe I could get a run out and dive under (Hawkins). I got beside him, but that’s all I could do. There just wasn't enough there. He was pretty good. This one stings a little bit, I ain't gonna lie. I feel like I had the car to win and we run second.”

The third-finishing Dohm was within a tenth of a second of the lead on laps 81-82 but couldn’t find a way past Hawkins as he primarily ran in the high groove, opposite his usual tactics.

"I was just too free in the bottom (groove). I couldn't get my stuff to stick down there and I was restarting better on the outside and I could keep Carson (Ferguson) down there and kind of keep up with Jake there for five or 10 laps,” Dohm said. “I probably could have tried to slide him a couple times, but he's my buddy and I wouldn't have — as bad as my car was on the bottom — I wouldn't have been able to stick it out. I’d have either took him out or just blowed right across the track and hit the wall or something. So I figured I just try to get to his outside and maybe pinch him down off (turn) floor, but he had such good traction off this corner, I just couldn't ever do it.”

Seven cautions slowed the action, none for multicar incidents. A lapped Ryan Montgomery spun in turn three to draw a lap-30 caution. Two laps later, Aaron Carter stopped in turn two for another yellow flag. Another yellow flew on lap 48 when Chris Meadows struck an infield tire barrier in turn one. Eddie Carrier Jr. slowed on lap 71 to draw a caution and Samuel Bryant did the same four laps later. Ross Bailes spun on lap 76 and the final caution appeared for a slowing Christian Hanger on lap 97.

Notes: Jacob Hawkins won his fifth overall Super Late Model race of the season. … His previous victory paid $10,000 at Ohio’s Atomic Speedway on June 25 on the Valvoline Iron-Man Racing Series. … Runner-up Max Blair thanked Randall Edwards and the Best Performance Motorsports team with helping change his flat tires. … Because engine problems kept Southern All Star points leader Matt Dooley from entering at Beckley, the second- and third-running drivers Billy Franklin and Shay Miller elected not to compete either, according to the series. … Eddie Carrier Jr. made another occasional appearance in Matt Cosner's backup car, winning a heat race. ... Josh Putnam spun out of third in the first heat after a scrape with Jacob Hawkins but won a consolation race to transfer to the main event. He lost a lap early and pitted on lap 30 to replace a flat tire. … Pennsylvania driver Drake Troutman, a Sunday winner at Mudlick Valley Raceway in Wallingford, Ky., scratched after heat action. ... The Alabama-based tour's debut at Beckley marks one of the richest events in track history with $20,000 going to the winner. ... The $65,000 total purse is the richest for the season on the series. ... Beckley hosted an American All-Star Series event for Crate Late Models on Friday with series points leader Hayden Cardwell grabbing the $2,500 victory.