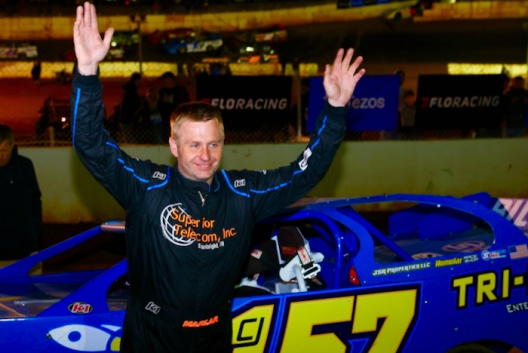 BULLS GAP, Tenn. — Mike Marlar made sure to soak in Thursday’s lively scene at Volunteer Speedway, so after putting on the indomitable performance of The Kyle Larson Presents Late Model Challenge presented by Tezos, he sprung to the top of his winning No. 157 machine and lifted his arms toward the packed crowd.

The Winfield, Tenn., native couldn’t have pictured a better setting for his latest $20,000 victory, leading all 50 laps from the pole over a stout field and topped off by an all-Tennessee podium of Jimmy Owens and Scott Bloomquist.

Larson, the promoter of the inaugural event that included his NASCAR Cup Series teammate William Byron, finished fourth and helped draw one of the largest crowds in the 4/10-mile oval’s history.

Marlar, who rebounded after wrecking a car two weeks ago at Bristol (Tenn.) Motor Speedway, beamed with gratitude.

“Oh, man, it’s awesome to win here,” Marlar told FloRacing’s Dustin Jarrett in victory lane through a wide smile. “Got to finish in front of two of my heroes tonight. There’s not a day I couldn’t think of doing that, (beating) Scott and Jimmy.

There seemed to be only two instances that tested Marlar en route to his third win of the season. The first unfolded on the initial start, where he jostled past polesitter Larson on the opening lap to win the battle for clean air. The second, meanwhile, came between laps 10 through 18 in which Marlar navigated traffic.

Marlar’s early one-second lead shrunk to a few lengths as Larson and Davenport closed in.

“I could hear them, but I could tell if they were cars in front of me that I was hearing. I know I wasn’t comfortable,” Marlar said. “I scrubbed off so much speed, and luckily the caution came out (on lap 18 for Ricky Weiss and Sam Seawright).”

Back-to-back cautions helped Marlar’s attack on lap 25 — the first for sixth-running Brandon Williams and the second when the yellow flag slipped from the possession of flagman Chris Tilley — but hurt Owens.

“I burned my right-rear tire trying to get around Larson and (Davenport) early,” Owens said. “We had a really, really good car. I hated to see that first caution come out. … We were plagued by those cautions. I felt like we were a little bit more maneuverable than those guys. It worked out, we had a good second-place run.”

The final 25 laps of the feature went green as Marlar beat Owens by 3.425 seconds.

Outside of Owens, Larson momentarily looked poised to dismantle Marlar. The NASCAR Cup Series champion captured quick time honors with a lap of 13.079 seconds but fell off the podium the last half of the main event.

Bloomquist, meanwhile, overtook a top-groove-happy Larson around the bottom side of the track to register his fourth top-six run five starts into the new season.

“We were really focused on our car trying to get it good on the bottom, just being real smooth, not overusing our tires,” Bloomquist said. “That one caution, we got a couple I thought, then we had to go back. All in all, we had a good run. Just glad to be back and feeling good. We could have run another 50 laps out there. My leg didn’t go numb and we’re excited about this season.”

“It’s awesome to see Scott back racing,” Marlar said. “The sport isn’t the same without him. Glad he’s here tonight. Glad to see he ran good.

“I’ve been fortunate to have a good team that can travel all over the country. But when we come back to East Tennessee, I know it’s going to be a home run. … It’s good to have all these Tennessee boys up front. I’ve got a big weekend. It feels good to get off on the right foot.”