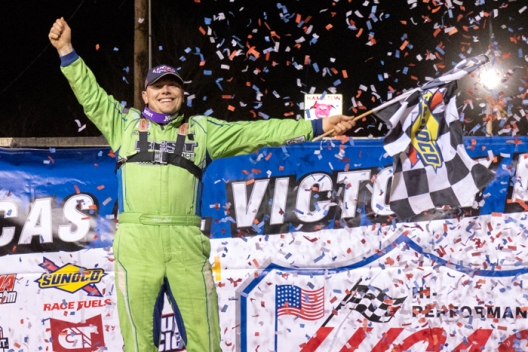 The 25-year-old driver from New Waverly, Texas, led all the way in Saturday evening's Conococheague 50 to earn his first Lucas Oil Late Model Dirt Series victory of the season and a $15,000 paycheck. He set fast time, won his heat race and swept the feature in winning by 2.188 seconds at a track where he'd previously finished 14th (in 2019) and fifth (in 2021).

"I just I can't believe it, honestly. The first year I came here I was so bad. It was unbelievable. And last year, we got a little bit better, and to get a win this year, it just means a lot," said Erb, who drives for Ohio-based Best Performance Motorsports. "(Crew chief) Randall (Edwards) has never won here in 150 years in racing so it's pretty cool to win here with him. And, you know, I'm just I'm excited to get to Port (Royal) tomorrow."

"I got a great group of supporters and, you know, we struggled in Florida (during Speedweeks) but did a lot better than most," Erb said. "Just had to come home and work on our stuff. And I feel like we've been really close to win last couple weeks, and to get a win here, it's a real confidence booster, and this place just moved up on my list of racetracks I like now."

McCreadie pressured Erb early , never pulling alongside but staying within a few tenths of a second, but the winner turned up the wick midrace.

"I felt like I had a good lead before we caught traffic there. I was trying to move around and I felt like (turns) three and four, I was OK, but (turns) one and two I didn't I didn't think I was making really good speed in the middle or the top. And when I moved down I felt way slower," Erb said. "Finally we had that restart and I just kind of told myself to run as hard as I can for about 10 laps, and Randall was showing me I had a good lead. I felt like I picked up the pace a little bit."

McCreadie, the Longhorn Chassis house car driver, said 2022's deck-height rule changes have put drivers in a "super small box (rulewise) and honestly track position means more than it ever has. I was just telling the guys, you can't stay in a guy's lane no more. You have to be on the right side of 'em or the left side of 'em and it just works the car way harder for everybody that's not leading," he said. "The track was really nice, but I just think like, with the situation we're in, it's just hard to pull out and pass."

"All in all it was a good night. I was able to pick off a couple spots and get a top three. We had a really good car, which we're working with a couple of new things this year to try to, obviously, to just try to get better. I just don't think we've got quite where we need to be yet, but we're definitely close," he said. "We're proud to run up here, top-three, you know, at I guess my hometown track. Didn't have the magic we had there a couple years ago, but we'll take a top-three and try to get something done tomorrow at Port Royal."

The lone caution appeared on the 28th lap when 13th-running Hudson O'Neal slowed on the frontstretch and pulled into the infield pits with left-front nosepiece damage.

Notes: Erb has 17 career Lucas Oil Series victories, tied on the all-time list with Iowa's Brian Birkhofer. ... Erb is the 13th winner in 14 Lucas Oil Series races at Hagerstown. ... Justin Weaver piloted the No. 32J normally driven by Shaun Jones. ... Everyone but Trever Feathers was running at the finish in the 25-car feature. ... Rain showers caused a few delays in the program. ... Max Blair scratched from his heat race when his transmission popped out of gear. ... Among others failing to make the feature event were Nick Dickson, Logan Roberson, Mason Zeigler and Andy Haus.