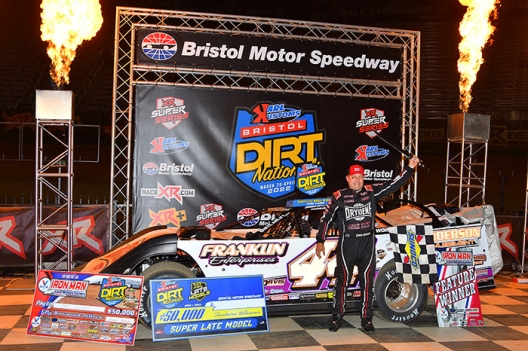 BRISTOL, Tenn. — For a brief moment during the initial start of Friday’s third round of the Karl Kustoms Bristol Dirt Nationals, it appeared Mike Marlar and Chris Madden would put forth a kind of battle for the lead that many onlookers have wished for these previous two weeks.

Then, Madden, of Gray Court, S.C., unleashed the status quo of his race operation. Exactly one week after smothering the field for his first colossal payday of the new season, Madden turned around and dominated again in Thunder Valley, winning his second $50,000 prize in as many weekends.

Madden led all 50 laps from the outside pole and topped Chris Ferguson, last Saturday’s Bristol winner, by 2.670 seconds for his fourth victory of the year, all in the last six races.

“We’ve been good ever since late last year,” Madden said in light of instant success this season. “We’ve found a few things that fit me with Mark (Richards) and those Rocket Chassis. We’ve been working really, extremely hard to get it to fit me. We’ve found a spot where I really like it. We’ve run good kind of everywhere we’ve been.

Through 150 feature laps between the three series races at Bristol, Madden has led all but 50 of them in which there's been two passes for the lead. Madden made the event's second pass for the top spot when he cleared Marlar going into turn three on the opening lap and never looked back.

Additionally, Madden’s fastest lap of the feature (15.596 seconds) ended up almost a half second faster than any finisher inside the top-10 on Friday (Brandon Sheppard, who finished ninth, clocked a fastest lap of 16.061 seconds.)

Madden led by as much as four seconds on Friday and, in spite of two caution periods midway through the running, operated much of the event with a sizable advantage.

There was, however, a 10-lap lull in which Madden had to buckle down and find a way forward in traffic.

During the first green flag run, Madden only logged four laps navigating the tailend of the field due to a caution for Marlar, who fell out of second when he slammed into the turns three and four wall on lap 12.

From laps 20 to 30, Madden had raced to a three-second lead only to stall out behind Garrett Smith, whose wake momentarily stunted Madden’s surge. Ricky Weiss closed to within three cars of Madden by lap 30.

If there was any moment that could have compromised Madden’s sweep of the night, it was that one.

“It was a little sketchy there, a little bit right there with Garrett,” Madden said. “He was kind of in the middle instead of one lane, but he finally got a run on (Joseph Joiner) and they both slid up in turns one and two, and I was able to take advantage of that, get both of them in one corner.”

Weiss couldn’t keep up with Madden for long, however, as he quickly fell 2.3 seconds behind with 15 laps remaining. While Madden raced into the night, Ferguson and Devin Moran leapfrogged the fading prospects of Weiss and Sheppard.

Ferguson rode around in fifth with 10 laps to go, but it was then that the upper groove started to clean off and generate more momentum for whomever took chances moving off the preferred bottom lane.

Two laps later, Ferguson blew past Moran for fourth and then Sheppard for third. A lap after that, he passed Weiss for second.

“When I first got to second, I couldn’t of even seen Chris,” Ferguson said. “He was probably half a track (ahead). Then, there at the end, I could see him. He was probably riding. It’s Chris Madden, he’s the best there is when conserving while he’s leading. I would have loved to see (a caution), but we’ll never know.”

Moran also came to life as the top line took shape, moving up the leaderboard for a third-place finish from the 10th-starting position. Madden certainly left no doubt on Friday, but considering the late speed of Ferguson and Moran, perhaps a caution would have sparked another result.

“Yeah, you know, his crew guys are pretty good, so they probably would have told him what we were doing under caution,” Moran said. “He might not have not went full send on that restart. I’m sure (Ferguson) would have picked the top and tried to rail on the outside of him, and at that point Chris probably would have slid up and I would have tried to get underneath of them. I might've made it a little dicey, but we’ll never know.”

Notes: Garrett Smith went to a backup car Friday after a flat right front tire messed up his primary machine by causing a hard hit in turn one. ... Kyle Larson returned to Dirt Late Model action and finished fourth from the ninth-starting position. ... Seventeen of 24 cars finished on the lead lap. ... Smith, Marlar, Mark Whitener, Shane Clanton and Ross Bailes failed to finish.