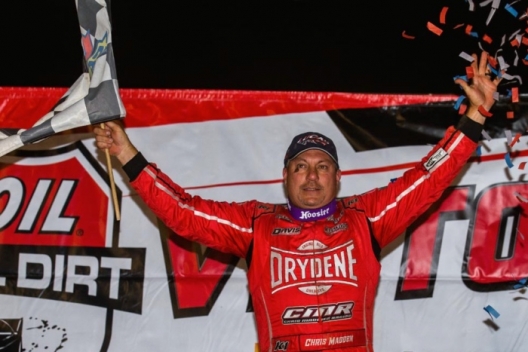 MARYVILLE, Tenn. — Chris Madden’s money train made a run through the Great Smoky Mountains — or close, at least.

Leading all 60 laps from the pole position, Madden, of Gray Court, S.C., easily won Saturday’s Lucas Oil Late Model Dirt Series-sanctioned Mountain Moonshine Classic. His only hiccup came in the waning laps as he tried to navigate the slower car of Tyler Erb.

Madden slipped high up the track and brushed the turn four wall, but still managed to right his Rocket Chassis and pull away from his closest pursuer, Jonathan Davenport of Blairsville, Ga., who steered his brand new Longhorn to a runner-up finish in its maiden voyage. Madden beat Davenport back to the checkered flag by 0.355 of a second as the sport’s two hottest drivers continue to swap victories.

“Me and (Davenport) just keep battling it out here,” Madden said, “but I'll tell you what, we've had an amazing year racing as hard as we’ve raced and you know, (Davenport’s) got a bunch of wins, I’ve got a bunch of wins and it's been a really fun season, so hopefully we can continue this.”

Last season’s hottest driver, Brandon Overton of Evans, Ga., rallied over the second half of the race from his seventh starting spot to finish third, while Ricky Thornton Jr. of Chandler, Ariz., improved one spot to take fourth. Mike Marlar of Winfield, Tenn., started third in a brand new race car a well, but dropped two spots to round out the top five.

Madden was never seriously challenged. Davenport did stay close, and managed to pull even with him on lap 46, but Madden quickly extended his lead again to dismiss Davenport’s threat. He appeared ready to cruise to the checkers until the scrape with the wall with the white flag in sight.

“I caught Terbo right there and when we come down the back straightaway I thought he was going to commit to the bottom,” Madden said. “So I committed to the top to try to get up beside him and he made a lane change right there suddenly and I was running way faster than he was, so we had to get on the binders pretty hard and I got loose and just backed it into the fence right there.

“When you're here running out there and you see the (score)board, you know, you got (Davenport) and you got Overton chasing you, you know, you got to hit every mark that you have. You better not miss them or they'll get by you. But, you know, we've had a great race car all year long.”

Indeed. It was Madden’s fourth $50,000 victory of the season to go along with the $100,000 check he received for finishing runner-up — to Davenport — in the Eldora Million on June 9 at Eldora Speedway on June 9. Madden and Davenport have dominated this season. After Saturday’s feature, Davenport conceded that it was Madden’s turn. He was close when Madden scraped the wall, but not close enough to execute a pass for the lead.

“You just never know when something like that happens,” Davenport said. “He could cut a tire or something, but I was hoping that wouldn't be the case. I was hoping it would stay green once we got in heavy lap traffic there and I could sneak around him, but this is a pretty tough place to pass on. It’s really technical and (Madden) just had a little bit better race car than I did in clean air.

“So congratulations, to him and his guys. You know, I wouldn't I want to run him dirty and that (would have) been the only way to get by him. I got beside him one time. But that was about all we could do.

“I just got to thank my guys once again for giving me such a great race car,” he added. “It's the first time we've been really competitive here (at Smoky Mountain) in a while, so we're definitely going the right direction. I’m just glad to come out of here with this brand new Longhorn in one piece and just (have) a notebook to start building.”

Overton improved two positions on the opening lap and grabbed two more as he settled into third on lap 13. From there however, he chased the leaders in vain, unable to climb any higher. He said he needed to do a better job during prelims.

“We didn't do a good job … (didn’t) win our heat race, so I had to start seventh,” Overton said. “I was passing them, but I was just still trying to take care of my tires. I know there was two good cars in front of me and I was hoping they'd race it out a little bit and maybe I'd have something left over to get them. But by the time I got there to them (the track) was just laned up. I was trying it. I could make a little time getting into (turn) one on the bottom, but there was enough grip for them to leave me off. So we’ll take it. You know, you just got to get up front, win these heats. Like I said, it is what it is.”

Notes: Madden has now won with five sanctioning bodies this season: Lucas Oil; World of Outlaws; XR Super Series; DIRTcar; Southern All-Stars; and the Schaeffer’s Spring Nationals. He was appreciative of the Smoky Mountain spectators. “We've been on the road for such a long time, but you know it's amazing to come back to Smoky Mountain and win in front of such a big crowd.” … Madden won his 15th career Lucas Oil Late Model Dirt Series feature, moving him ahead of series tech director Steve Francis of Bowling Green, Ky., and into a tie for 12th on the tour’s all-time win list with Mike Marlar of Winfield, Tenn. … The race was slowed by two cautions, Daulton Wilson spun on lap one and Spencer Hughes slowed on lap 22.  … This was the seventh time the series visited Smoky Mountain. Not counting Friday’s twin 30-lap prelim features (won by Madden and Jimmy Owens), there still hasn’t been a repeat winner. The tour winners at Smoky Mountain: Madden; Overton (2020); Hudson O’Neal (’19), Owens (’17); Dale McDowell (’17); Randy Weaver (’16) and Casey Roberts (’15).