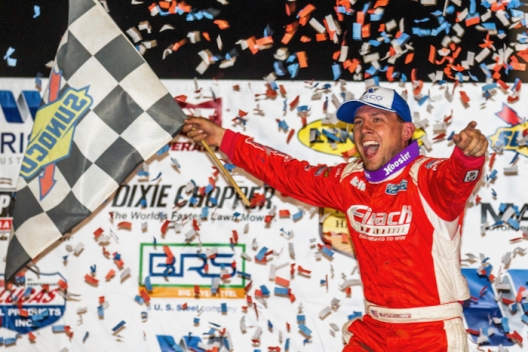 With Sheppard leading on a lap-34 restart, the third-running Moran zipped by to take command and kept the field in check the final 17 laps of East Bay's Lucas Oil Late Model Dirt Series finale to prevent an unprecedented fourth consecutive Wrisco Winternationals victory for Sheppard.

"I knew we were gonna have to do something special to beat (Sheppard). He was the best car all week long without a doubt," an excited Moran said in victory lane after his third-to-first move. "I felt that bottom cleaning up a little bit, like under that caution, and I knew if I could get straight and go, I had a chance to at least get (past Kyle Bronson) for second. But when we got into (turn) one and I was I was door-to-door with (Sheppard), I was going to the fence to get the lead, because I knew that might have been my only shot."

In scoring his third Lucas Oil Series victory of the season at as many tracks, the driver from Dresden, Ohio, took the checkers 0.653 of second ahead of runner-up Tyler Erb of New Waverly, Texas. Ninth-starting Mark Whitener of Middleburg, Fla., was third for Ocala-based Big Frog Motorsports with Tanner English of Benton, Ky., in fourth. Pole-starting Brandon Overton of Evans, Ga., who led the first two laps before Sheppard took command, rounded out the top five in a race where rain briefly delayed the first green flag then halted action for 10 minutes on lap 28.

Sheppard's bid for a record-setting fourth consecutive victory looked promising as the New Berlin, Ill., driver dominated through the race's halfway point, but then everything went wrong for the Rocket Chassis house car driver. Amid a series of cautions, Moran stole the lead from Sheppard, then on the same lap Sheppard got hung up against the turn-four wall, tumbling back to 12th. On the ensuing restart, Sheppard was in the middle of a three-car collision that ended his night.

"It was good week," a disappointed Sheppard said. "I just hated it that it ended this way."

Moran was as thrilled as Sheppard was dejected in capturing his second career victory at East Bay, a track where his Hall of Fame father also won twice, including the 2004 Winternationals finale.

"Man, this is so awesome. Man, that was a badass race. (Track owner) Al (Varnadore) and them guys did an awesome job on the track. I think the rain helped. It helped us because we had a softer (right-rear) tire than almost everyone," Moran said. "I'm just pretty much speechless because there for a while I didn't know if we could do it or not. Like I said, the rain kind of brought a little moisture back into the track and I knew we were soft. This car is just bad to the bone."

Moran, whose previous Speedweeks victories came at Golden Isles Speedway near Brunswick, Ga., and Ocala's Bubba Raceway Park, had his best run in East Bay's finale after contending most every night.

"We've just been missing it here all week just a little bit. We tried (changes) earlier in the night and it was pretty good. We just went more and more as the night went on," Moran said. "(Saturday's) restarts after that were a little sketchy ... I knew I was gonna have to move down and I just didn't know when. I about gave it away to (Tyler Erb) and I got it back off (turn) two. It was just awesome."

Sheppard thought Moran got a good jump on the race's critical restart — maybe too good.

"You're not supposed to pass before the (chalk) line (at the turn-four exit). Maybe he wasn't past me before the line? I don't know," said Sheppard, who also questioned the wisdom of going back to green on a wet track. "I mean, he was ahead of me long before we got to the flagstand, that's for sure. After that I went in (to the corner) too close to Moran and got stuck in the cushion."

Erb, a two-time winner at East Bay last season, was disappointed to fall short with his second podium finish of the week.

"It was the craziest race. I've never been in a race that rained and did everything that happened there, but just, you know, them last two or three cautions, I didn't need him to go my way when (Moran) and Kyle (Bronson) and Sheppard were all on the top. I just wish it would have stayed green," he said. "I'm just excited to be here. Hate to run second, but we'll take it."

Whitener, whose Augie Burtram-owned car is wrenched by Mike Rey, said the team "finally got it where I could drive it tonight. ... Augie's spending all the money and Mike Rey's worked on this thing, he's putting his heart and soul in it trying to get it fast for me.

"I'm just glad to be on a podium with them. It feels like a win with this tough crowd. I've got a lot of laps around here, so we'll we'll take this as a win and we'll go next week and maybe we can get us a victory at Volusia (Speedway Park in Barberville, Fla.).

Five cautions slowed the action, the first for the light rain shower after 28 laps, then again when a yellow flag dropped on lap 34 after Boom Briggs ended up facing the wrong direction.

Two cautions appeared on lap 35, first for a slowing Chase Junghans then for a turn-four tangle among Sheppard, Garrett Alberson and Stormy Scott.

The final yellow appeared on the 45th lap when Shane Clanton took Ross Robinson's car around in turn three.

Notes: Devin Moran owns five career Lucas Oil Series victories. ... Brandon Overton led in each of the week's five main events but went winless. ... Home-track driver Kyle Bronson started 11th and rallied to second before fading back to 11th after the flurry of midrace cautions. ... Eighteen of 27 starters completed 50 laps. ... Four-time series champ Earl Pearson Jr. was forced to take a provisional starting spot in a backup car after a breaking a rear end during the fifth heat. ... Dale Hollidge led seven of eight laps in the first heat before losing the point to Brandon Overton; he lost his runner-up finish when postrace inspection because his car failed the droop rule — not because the deck height was exceeded but because the chain in the suspension was not tight, Lucas Oil Series tech director Steve Francis said. ... Garrett Smith also lost a heat transfer spot when he failed to report to the scales after finishing third. ... Daulton Wilson shredded a right-rear tire running second in the fifth heat, but he was able to transfer to the main event through a consolation race. ... Pierce McCarter scratched from a pole starting spot in the second consolation.