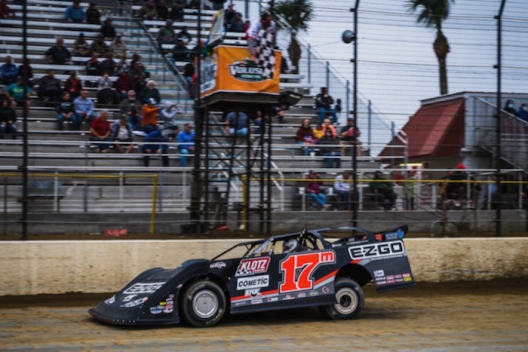 With the $10,000 triumph coming in his first start since undergoing season-ending prostate cancer surgery in late September, the 55-year-old veteran from Chickamauga, Ga., battled his emotions after dominating the first of three Sunshine Nationals events from flag-to-flag.

“I wanna be tough,” McDowell said, searching for the right words to describe the moment. “I realize you need to be tough … but very emotional. I need to thank the good Lord above for letting me come back and do what I love because four months ago I didn’t know what was gonna happen.”

McDowell, who was diagnosed with prostate cancer last summer, was victorious in his last start of 2021 — a Sept. 25 Southern All Star Series event at Smoky Mountain Speedway in Maryville, Tenn. — before his scheduled surgery. Nearly four months out of the cockpit left him feeling at less than 100 percent physically upon his return to action Thursday at Volusia, but he showed no rust on his way to leading every lap off the pole position in Friday afternoon’s headliner, which was postponed from Thursday due to the late hour and rough track conditions.

Dennis Erb Jr. of Carpentersville, Ill., overtook Chris Madden of Gray Court, S.C., for second on lap 13 but never was able to offer McDowell a serious challenge. Even a final caution flag on lap 28 that erased McDowell’s edge of over 4 seconds had no impact as McDowell controlled the restart to beat Erb by 1.519 seconds driving his brother Shane’s Team Zero Race Car.

NASCAR Cup Series champion Kyle Larson of Elk Grove, Calif., marched forward from the 11th starting spot to finish third in the K&L Rumley Enterprises machine after his late bids to overtake Erb fell short. Madden settled for fourth after running second for much of the race’s first half while Hudson O’Neal of Martinsville, Ind., was the A-main’s biggest mover with an advance from 18th to finish fifth.

McDowell had a long list of people to thank for his memorable return to competition from his health scare.

“Hat’s off to my brother (and) everybody who took care of me while we were sick and stood by us,” said McDowell, whose fourth career Late Model win at Volusia was his first since a WoO score on Feb. 15, 2018. “(Girlfriend) Tiffany at home, the kids. Shane and Sara (Shane’s wife) came down and took care of me while I was sick. And all the race fans that reached out … that was very important for the healing process.”

McDowell paused, and then added, “I just can’t tell you how ecstatic I am to be here.”

But while McDowell tamed the half-mile oval’s difficult track conditions while running alone in front, he admitted the 30-lap distance was long enough for him.

“I just gotta get some energy,” McDowell said when asked to look ahead to Friday’s regularly-scheduled racing program. “Boy, I’m beat, but I’ll get rested up for tonight and go again. Nothing’s better than a win.

“It’s funny. Last night (NASCAR Cup Series driver) Chase Elliott was texting me late and said, ‘I see you. You need to go get it.’ I was like, ‘Yeah, I need to go get it, but it’s gonna be aggressive.’ The track was a little aggressive today, a lot of character to it, so that makes good racing for the fans (but) it makes us scratch our head a little bit.”

Erb, 49, rolled the inside lane around the speedway to perfection. He had nothing for McDowell, but he was satisfied with a season-opening outing that brought him a $1,000 bonus for being the highest-finishing WoO regular under the national tour’s new-for-2022 incentive program.

“To get a good start down here — we got seven races or so — we gotta make the best of it and come out of Florida with a good run in the points,” Erb said. “We just have to keep it up here for the rest of the week.”

The 29-year-old Larson came on strong during the race’s second half after finding a route that took him around the track’s roughest spots.

“I got into a good rhythm there where I could miss some of the holes,” said Larson, who made his first Dirt Late Model start of 2022. “And I think (Brandon) Sheppard and (Kyle) Strickler kind of missed it down there and I was able to get underneath them and then just barely edge Strickler out before one of the cautions fell. Then they got to wrecking on the restart (fourth-place Devin Moran spun on lap 19 to move Larson to fourth and set up his restart pass of Madden).

“I felt pretty good. I could get down the backstretch good. But the line I was running would just kill my exit off of four and then I’d lose my ground I’d make up on Dennis. What I was doing was working but making it hard to pass.

“Hopefully the track will get a little bit better (for Friday evening’s show),” he added. “I don’t think it will because it seems like the more laps we run on it the deeper we’re getting into the surface. It’s just really soft in spots. We’ll try to get our car a little bit better, a little bit smoother.”

Ryan Gustin triggered the race’s second caution, also on lap two, when his car snapped sideways in turn four just after he had moved into fifth place. He collected Josh Richards and Ricky Thornton Jr. and all three drivers involved headed to the pits for servicing.

Cautions also flew on lap 12 for Richards’s 360-degree spin off turn two; lap 19 when Chris Simpson slowed with mechanical trouble; the lap-19 restart when fourth-running Devin Moran spun after clipping the inside wall in turn two and collected Tanner English, Brent Larson and Morgan Bagley; and lap 28 when Richards’s rough race ended when he spun again off turn two and retired with a mangled nose on his Boom Briggs team car.

Notes: McDowell’s 13th career WoO victory was his first since April 28, 2018, at Smoky Mountain Speedway and tied him with Shannon Babb for 15th on the tour’s all-time win list. … The feature was originally scheduled for 40 laps but WoO officials cut it by 10 circuits before announcing its postponement the previous night. … McDowell took the checkered flag at 4:08 p.m. … On Thursday, Mark Whitener’s night ended upside down in turn one in the second consolation race. The Middleburg, Fla., standout was outside of Boom Briggs down the frontstretch on the first lap and ran out of room; his car rode the wall into turn one “like Lightning McQueen,” he said — catching some of the catch fence as it went — before rolling over twice. He climbed out of the Big Frog Motorsports Car sore but otherwise uninjured. ... Thursday’s WoO fast qualifier Kyle Hammer of Clinton, Ill., caught a break in time trials when the rookie took an extra circuit after his qualifying laps, a no-no according to the series rulebook. Because the rule wasn’t explicitly mentioned at the drivers' meeting, however, officials didn't issue the normal penalty of stripping a qualifier of their fastest lap. Hammer, however, broke a driveshaft and transmission while running fourth in his heat race; he made repairs for the consolation race but failed to transfer and didn’t use an emergency provisional.

Notes: Florida standout Mark Whitener's night ended upside down in turn one in the second consolation race. The Middleburg, Fla., driver was running outside of Boom Briggs down the frontstretch and ran out of room his his car riding the wall into turn one before going over. He climbed out of the Big Frog Motorsports Car apparently uninjured. ... Thursday's WoO fast qualifier Kyle Hammer of Clinton, Ill., caught a break in time trials when the rookie took an extra lap after his qualifying laps, a no-no according to the series rulebook. Because the rule wasn't explicitly mentioned at the drivers' meeting, officials didn't issue the normal penalty of stripping a qualifier of his fastest lap. Hammer, however, broke his driveshaft and transmission in both the heat and consolation races, ending his night early.