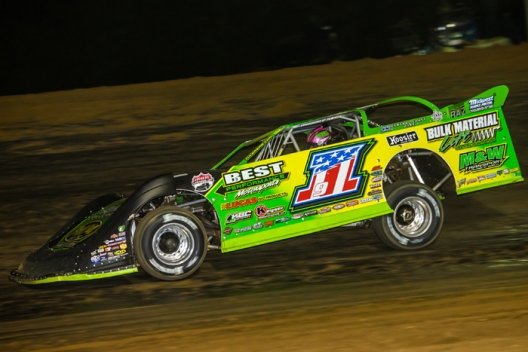 BROWNSTOWN, Ind. — Early contact with one of Brownstown Speedway's favorite sons didn't endear Tyler Erb to fans at the quarter-mile fairgrounds oval, but he didn't mind hearing boos in victory lane if it meant he earned his tour-leading seventh Lucas Oil Late Model Dirt Series victory of the season.

Surviving his early scrape with Hudson O'Neal and then regaining the lead on lap 30 when Josh Rice's right-rear tire went flat, Erb collected $10,000 in Friday's Night Before the Jackson for his third victory in his last five Lucas Oil features and the 16th of his career.

"This is awesome," Erb said in victory lane. Man, I love winning races and I've definitely done a lot worse, so I'm definitely not sweating all the boos today."

Erb, who led laps 14-16 and then 30-40, took the checkers 1.809 seconds ahead of series points leader Tim McCreadie of Watertown, N.Y., in the second of three consecutive Lucas Oil features during the Jackson 100 weekend. Thursday's winner Brandon Sheppard of New Berlin, Ill., was third followed by 16th-starting Devin Moran of Dresden, Ohio, and Tanner English of Benton, Ky.

Rice, who led laps 4-13 and 17-29, rallied back to finish ninth in a 40-lap race with plenty of beating and banging — on the cushion and other cars — with nine cautions slowing the action.

Scott James of Bright, Ind., led the first three laps before Rice took command amid a stretch of early yellows, but Erb went under Rice on the 14th lap and held the top spot for three circuits before Rice got rolling again on the high side to move back out front.

Shortly after the eighth-running James slowed to depart on lap 26, Erb was still hot on Rice's heels when he slowed just before crossing the line for the 30th time and pulled to the infield to get a new right-rear tire.

From their, Erb stayed ahead of the fray that included a contact-filled battle for second between Jimmy Owens and track points leader Devin Gilpin that knocked both drivers out of the race. McCreadie never made a serious bid to overtake the leader.

"It feels great, man. Brownstown, they did a great job from yesterday to today to give us a good racetrack. I'm thrilled," said Erb, who battled engine woes the previous night.

The winner wasn't shy about discussing the lap-three caution that sent O'Neal spinning into an infield tire barrier in turn four.

The victory makes Erb among the favorites for Saturday's $20,000-to-win 42nd annual Jackson 100 that caps three busy nights of action.

"We were good all night and this gives us a little bit of confidence for tomorrow," he said.

McCreadie was glad to survive aggressive driving by competitors and get a finish better than he felt like he deserved.

"It's really wild out there, man. Just guys, you'd think it was the beginning of the year the way they're racing. They're all really hungry man," the fifth-starting McCreadie said. "A lot of 'em having trouble seeing out of their right eye, I guess, when they're out there. I don't know. I just tried to stay out of their way. Guys were sliding me, and I'm like, 'Well, just do what you can do.' "

He added: "Tonight, we just weren't good enough. We were probably a third- or fourth-place car, but the two guys in front of me got a little ornery and things like that, and we'll take a second tonight. It's the first time we've probably finished second where we deserved to finish fifth, so that's pretty cool."

Sheppard, who earned $15,000 Thursday in the makeup of March's Indiana Icebreaker, has his eye on a bigger paycheck Saturday.

"It was pretty crazy there for a while, for sure, but we were fortunate to keep our nose clean there and hang on for a third-place finish," the Rocket Chassis house car driver said. "The car was really good there. I don't know, there's probably a few things we need to do different for tomorrow, but who knows with weather coming what the track's going to do. You know, as long as we're consistent and keep this thing up front, that's our goal. So we're just going to work on this thing and hopefully get a win tomorrow.

"The top was really treacherous up there tonight and it took a couple of victims. We were really good around the middle-bottom there, so hopefully that means something for a long race tomorrow."

The race was slowed by nine cautions, four of them on the first six laps and four in the final 11 laps. Spencer Hughes drew a lap-three caution and headed pitside with sheetmetal damage and another yellow appeared a lap later for power steering failure for Kyle Bronson. On the restart, O'Neal went around in turn tour and on the sixth lap Justin Rattliff dropped a driveshaft on the frontstretch, drawing a fourth caution.

James slowed for a lap-26 yellow and Rice's flat tire drew a lap-29 slowdown. The seventh caution appeared on the lap-30 restart for the Owens-Gilpin showdown that saw them make contact several times from turn two all the way to turn three while chasing Erb. The final yellows came out on lap 34 for a slowing Ashton Winger and lap 35 for a slowing O'Neal.

Notes: Hard charger Josh Richards received $500 from Dion and Suzanne Deason; Dion Deason was a former Brownstown Late Model standout. ...  Shelby Miles had ignition issues and scratched from the feature. ... Mike Marlar spun out of the lead in the first heat but rebounded to win a consolation race. He was an early retiree in the main event. ... Lucas Oil Series title contender Jonathan Davenport of Blairsville, Ga., is missing the Brownstown weekend after testing positive for Covid-19.