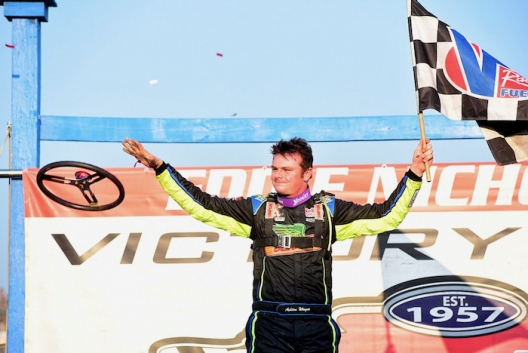 NEW RICHMOND, Wis. — Ashton Winger was flying in the high groove early in Friday's 30-lap preliminary feature at Cedar Lake Speedway, sweeping into the lead over polesitter Chase Junghans on the eighth lap.

But Winger's performance in the low groove in the race's waning laps was drastically different.

A revived Junghans dove under the low-running Winger entering turn three on the final lap with the frontrunners making contact and Junghans briefly edging ahead before Winger won the race to the checkers by a mere tenth of a second in the early evening affair.

Winger's $6,000 payday in the rain-postponed prelim for the USA Nationals weekend — there's $50,000 on the line Saturday — came at a track where the 21-year-old Hampton, Ga., driver won his first World of Outlaws Morton Buildings Late Model Series race 13 months earlier.

"I don't know what it is about this place," Winger said after climbing from his car and celebrating with his patented steering wheel drop. "This place is awesome ... to see all the awesome fans out here. This place, every time we roll in here, it feels like home. This will definitely always be a special place to me, getting my first Outlaw win."

Manhattan, Kan.'s Junghans, aiming for his first series victory since 2019, led the first seven laps and finished second in a race scheduled for Thursday but pushed to the beginning of Friday's program because of rain the previous night. Series points leader Brandon Sheppard of New Berlin, Ill., was third in the Rocket Chassis house car while Jimmy Owens of Newport, Tenn., and Nick Hoffman of Mooresville, N.C., subbing for Scott Bloomquist, rounded out the top five.

Junghans got the early jump but Winger broke away from a four-wide battle off turn two on the first lap and got rolling on the high side. He tracked down Junghans and swept past on the backstretch on the eight lap.

After a pair of midrace cautions, Winger again cruised in the high groove, but when he dropped low amid traffic — brushing past a slower Chad Simpson entering turn three with five laps remaining — the leader lost his rhythm in a race he called "one of the best day races I've ever been a part of."

"I got lost there without about four or five (laps) to go after I lapped Chad," Winger said. "I know I went pretty hard early and I wasn't sure if I had killed my tire. When I went to move down (to the low groove), I couldn't move down.

"I knew when I was going into that bottom I was stalling out. About halfway down the back straightaway I'd launch forward — I think (the surface) started to patch up and rubber — so I didn't really 100 percent know where to be. I don't usually use a stick guy (giving signals), but I probably could've used somebody there with hands, I know (officials) took the sticks away.

"But man, this racetrack's awesome. You never know where to be and this sun's glaring on this thing and we're two- and three-wide. And then once I got to them lapped cars I was just stalling out."

Junghans took his best shot at Winger on the final laps.

"I just needed to leave a little bit better off of (turn) four," the runner-up said. "But I seen him take the bottom on that last lap and I was licking my chops. I was like, 'I'm going to blast it off in here and hopefully cross him over.' But we did all we could. I ain't going to wreck him for $6,000 or nothing, so, we'll just build off of that and keep on trucking."

"This is awesome," he said, thanking sponsors, crew and family members. "I'm just a silly old Georgia boy trying to make everybody at home proud and to get to come out here and do it in front of all these awesome people."

Two cautions slowed the action, both on the 13th lap. The first appeared when Ryan Gustin's car went up in a plume of white smoke, forcing him out of the race. On the ensuring restart, Bobby Pierce and Jake Timm ended up facing the wrong direction on the frontstretch while taking the green.

WoO competitors went right back to work after the race for a double-heat race program that will set up the starting lineup for Saturday's 100-lapper paying $50,000-to-win.

Rain that arrived four laps into the first of Thursday night's three consolations turned into a thunderstorm that deluged Cedar Lake Speedway, prompting track and World of Outlaws officials to postpone the last-chance races and 30-lap, $6,000-to-win feature to Friday.

The start time of Friday's program will be pushed up to 5:30 p.m. for hot laps to allow the completion of Thursday's action. Following a short break to rework the track surface, Friday's regularly-scheduled show — double-heats and a dash to set the lineups for Saturday's USA Nationals A-main and consolations plus a full card for Cedar Lake's weekly Late Model division — will then be contested.

The USRA Late Model feature that was part of Thursday's program will be rescheduled for the next time the division competes at Cedar Lake.

After forecasts of early-evening rain suddenly were updated for the better late in Thursday afternoon, the weather shifted again as qualifying was underway to indicate thunderstorms were likely to strike before 9 p.m. Officials were able to rip off all six heat races by 8:25 p.m. and barely 10 minutes later had the first B-main rolling, but then precipitation began to fall to force the field to the pit area. Moments later the rain turned into a full-fledged deluge, dooming the evening's racing.