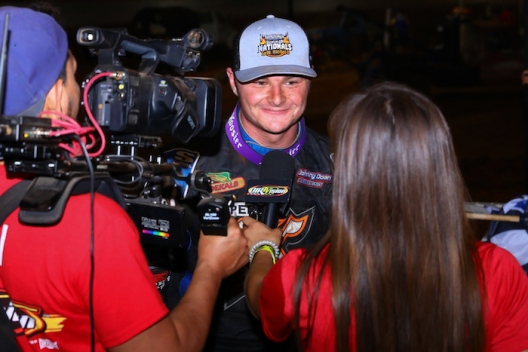 CLARKSVILLE, Tenn. — Everything was going Ashton Winger's way in Saturday's 40-lap DIRTcar Summer Nationals feature at Clarksville Speedway — until there were four sideways cars literally in his way.

Suddenly, the 21-year-old Hampton, Ga., driver's potential flag-to-flag victory had some serious problems as his No. 12 came upon two pairs of tangled cars in turn four and barely a car's width of room to slip between them.

"At the last second, I seen them guys split a little bit and I thought I would get whoa'd up without shifting my front end. And I did. You probably couldn't have stuck a piece of paper between me on both sides," Winger said of his move executed as the yellow flag flew with him leading on the 12th lap.

"Our car is just balanced, you know. If you've got a car that's not very stuck to the center of the corner, it's pretty hard to do that," Winger said. "Pretty much all that was going through my mind was 'Oh crap!' so I'm glad it all worked out."

The survival move and dominating performance the rest of the way on the red-clay quarter-mile oval paid $10,000 and his fourth series victory for the driver tackling the grueling tour for the first time. He took the checkered flag 1.682 seconds over series points leader Bobby Pierce of Oakwood, Ill., who has finished second in all four of Winger's victories.

The eighth-starting Pierce outdueled fellow former series champion Dennis Erb Jr. of Carpentersville, Ill., for second as Erb briefly held the second spot on two occasions after starting sixth. Fast qualifier Tanner English of Benton, Ky., and Joe Godsey of Edinburgh, Ind., who was second the first five laps before being shuffled back on a restart, rounded out the top five.

Winger voiced his reservations about the racetrack earlier in the night, and even after his victory hadn't really changed his mind — "I mean, it's all right," was the most positive thing he could come up with on the record — but Clarksville helped him continue a hot streak of five straight podium finishes on the tour, three victories in his last five tour starts and four victories overall.

He credits his father Gary Winger and cousin Will for their crew work to whip his race car into shape.

"My dad and Will, like I said, went to work and our car got better. I really felt like we were going to win some races earlier in the year, whether it was going to be on the Hell Tour or not, and they got away from me. Then I had some motor trouble — and I've been doing some dumb stuff," Winger said. "On this Hell Tour, I started on the front row a couple of times, and honestly, I just didn't do a good job, you know what I'm saying? And then it got to the point where we all started clicking and jelling and me and my dad sat down and we had a serious conversation about what it takes to win these races, even if they are 40 laps.

"It's hard to win a 20-lap race, so if you are to tell me I'd have won four races, especially after Fayette County when I started next to (Brandon Sheppard) and run like seventh, man, I'd have told you that you were a liar. Luckily we have eight or nine more of (Summer Nationals races) to go, so hopefully we can shoot for 12 or 13 (victories)."

Pierce had his best-ever series performance at Clarksville, but he couldn't track down Winger despite getting up to the second spot in the second half of the race.

"For us, tonight feels like a win, for sure, for how the night started," Pierce said. "We were terrible in qualifying and not the best in the heat race and I think we made some right calls with the setup and the car was really good."

Pierce was trying different lines in trying to catch Winger but congrataulated the winner: "He's been really fast lately," he said. "We've been going 1-2 a lot, back and forth. I guess he's the guy and we've gotta stay ahead of him."

Besides the lap-12 wreck Winger avoided yet another multicar incident early in the race required a red-flag cleanup on a track where dust that kicked up from a dry infield made vision difficult.

The first red-flag period came on the seventh lap for a backstretch scramble involving Robert Ardry, David Seibers, Jadon Frame and Larry Barber Jr. The backstretch was virtually blocked by the aftermath with Frame's machine getting the worst of it, forcing him to retire.

The race was slowed six times in all, including a caution on the initial start when John Minon ended up against the frontstretch wall after dust enveloped the rear of the field.

The final caution appeared on 28th lap for Denby's spin inside turn four that set off a brief fracas.

During the caution period, Denby pulled back onto the track going the wrong direction on the frontstretch and nosed into the car of the fourth-running English in apparent retaliation.

English's crew member Brock Pettit, stationed in the infield, threw one of his signal sticks at Denby's car and then approached the No. 27 before promoter William Scogin forcefully grabbed Pettit by his shoulders to pull him back toward the infield and shoo others away from the scene.

Many from the packed grandstands scurried to frontstretch fence to get a closer look at the fireworks. Denby was disqualified.

Notes: A dozen cars finished on the lead lap.. ... Tour rookie Thomas Hunziker of Bend, Ore., finished 10th for his best career tour performance. ... Bobby Pierce's runner-up finish was the best of his career at Clarksville, where his father and crew chief Bob Pierce won in his debut (2001 in the Summer Nationals) but didn't have much luck afterward. "He's never been any good here," the elder Pierce said just before the feature. "And I can't really help him because I wasn't very good here either." ... One gentleman came up to track promoter William Scogin during undercard action and told him that "if I don't see you again later, I just want to thank you for starting everybody in the Late Model feature." For starting more than the minimum 22 cars, Scogin shrugged: "It's only money."

In the redraw among heat winners, Ashton Winger is on the pole position with Joe Godsey outside the front row. Tanner English starts third. ... Officials scrapped the Late Model consolation and will start all cars that are in position to start. ... Mitch McGrath's prelims were rough from the start when he missed hot laps. In the third heat, he was involved in multiple scrapes, spinning after help from Caleb Ashby, taking a dusty infield foray and then again spinning with Ashby getting a piece of him as he went past. ... Richard Frost spun twice on the first lap of the first heat to trigger two restarts, but successfully started the third time and transferred with the fifth and final transfer spot. ... Joe Denby initially lost his qualifying time via disqualification because his transmission locked up and he wasn't able to go across the scales, but because officials at the scales had told him he wouldn't lose his time. DIRTcar decided to restore him to an equitable starting position (put inside the third row in the same heat he wouldn't started the tail on so officials wouldn't have to rework each heat lineup).