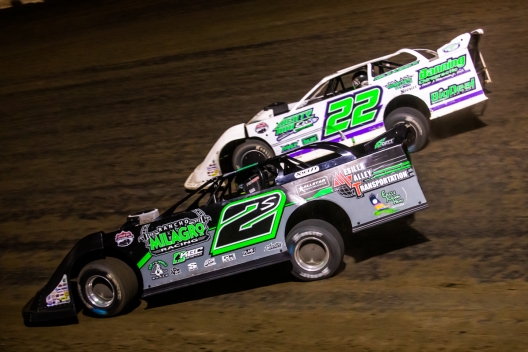 A winner of just a single Super Late Model feature in his career — achieved in Lucas Oil Series action at Florida’s East Bay Raceway Park in January — the 31-year-old driver tallied the high points total with a seventh-to-second run in Round 1 and a victory from the third starting spot in the second set of prelims. His previous Silver Dollar Nationals feature starts resulted in finishes of 13th (2019) and 18th (’20).

Scott will share the front row for the 80-lap A-main with Chase Junghans of Manhattan, Kan., who secured the outside pole for what will be his fourth career Silver Dollar Nationals feature appearance. He was atop the passing-points standings after going from ninth-to-second in his Round 1 heat, but slipping from the pole position to a runner-up finish in the second round left him behind Scott in the final results.

The rest of Friday’s 44 entries will attempt to transfer into the main event through Saturday consolation races or use provisional spots. Just taking the green flag in the feature is worth a Dirt Late Model division-record $5,300.

Rebounding from a seventh-place finish in his Round 1 heat, Ricky Weiss scored a dominant victory in the first prelim of the second set. … The only heat winner of Round 2 to start beyond the front row was Stormy Scott, who captured the third prelim from the third starting spot. … A caution flag with four laps remaining in Heat 4 — for Brian Kosiski backing into the wall between turns three and four — changed the complexion of the race. Brandon Overton had been challenging Jonathan Davenport for the lead before the slowdown, but Tim McCreadie used the outside line to overtake Overton for second on the restart and the former Silver Dollar Nationals champion finished in the runner-up spot with Overton settling for third. … Ricky Thornton Jr. piloted his backup car to a fifth-place finish in the forth heat. … Tad Pospisil went from winning a heat in Round 1 to finishing last in his second-round race.

(Combined passing points totals from both rounds of time trials set Saturday's feature and consolation lineups; the top 18 drivers will be locked into the main event)

Buoyed by an impressive charge from the ninth starting spot to a runner-up finish in Heat 3, Chase Junghans accumulated the most passing points (67.32) to sit atop the standings after the first round of heat action. … Stormy Scott continued his solid week with a seventh-to-second run in Heat 4 that earned him 63.80 points, leaving him second in the standings after Round 1. … The remainder of the top five in passing points after the first set of heats: Jimmy Owens (62.04), Heat 5 winner Shane Clanton (60.76) and Heat 4 victor Kyle Bronson (60.76). … Ricky Thornton Jr. was leading the third with two laps remaining when electrical problems caused his car to shut off. He limped into the pits and pulled out his backup car for possible use in the second round of qualifying. … Tyler Erb and Brandon Overton — the week’s two feature winners — got off to slow starts in the passing-points battle. Erb sat 18th in the standings after his fifth-to-fourth performance in Heat 1 and Overton was 22nd after only going from sixth-to-fifth in Heat 4. … Mike Marlar was a retiree from the second heat. … The fifth heat was red-flagged for over a half-hour after Dusty Leonard took a wild ride into the catch fence between turns three and four. His car’s nosepiece was ripped off when he clipped the fencing, which created a lengthy delay as track and Lucas Oil Series officials combined to repair the damage. Leonard escaped the wreck without injury.

(Combined passing points totals from both rounds of time trials set Saturday's feature and consolation lineups; the top 18 drivers will be locked into the main event)

After three days of rather comfortable weather for Nebraska in mid-summer — highs in the 80s with overcast skies and a refreshing breeze — Friday’s Silver Dollar Nationals qualifying program brings more typical I-80 Speedway conditions with bright sun and high temperatures climbing into the mid-90s and a heat index approaching 105 degrees. There is a steady wind to help cool attendees. … Four drivers — Ryan Gustin of Marshalltown, Iowa, Terry Phillips of Springfield, Mo., Cory Dumpert of York, Neb., and John Anderson of Omaha, Neb. — have joined the Lucas Oil Series for the first time this week. … Anderson is driving a second Chase Junghans car, reuniting the veteran racer with the Manhattan, Kan.-based team owned by Junghans’s father Greg for which Anderson campaigned with great regional success for more than half a decade. Anderson’s first action with Junghans since 2015 is also his first Dirt Late Model start of the season. … Dumpert is driving fellow the No. 6 fielded by fellow Nebraskan Al Humphrey, who competed in the I-80 Nationals portion of the week. … Joining Humphrey in pulling out of further action was Corey Zeitner, Junior Coover and Reid Millard.

(Combined passing points totals from both rounds of heats set Saturday's feature and consolation lineups; the top 18 drivers will be locked into the main event)