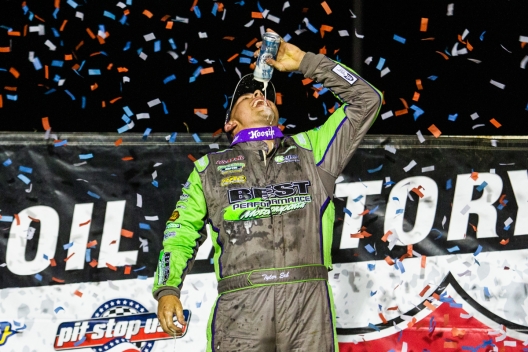 GREENWOOD, Neb. (July 22) — Tyler Erb stepped on the gas at the initial green flag, grabbed the lead and never missed a beat for all 53 caution-free circuits of Thursday night’s Al Belt Custom Homes I-80 Nationals.

The 24-year-old standout from New Waverly, Texas, was simply untouchable on his way to a dominant Lucas Oil Late Model Dirt Series-sanctioned victory at I-80 Speedway.

“My car was real maneuverable,” Erb said after racing unchallenged from the pole position to a career-high winner’s purse of $30,000 in his Best Performance Motorsports XR1 Rocket. “I could go top, middle, low, bottom. That definitely made it easy. I was really, really comfortable driving.”

Erb handled nearly race-long lapped traffic with aplomb as he maintained a commanding edge over his pursuers for the entire distance. His final winning margin was 5.515 seconds — roughly a full straightaway — over sixth-starter Hudson O’Neal of Martinsville, Ind., who overtook Spencer Hughes of Meridian, Miss., for second on lap 29 but never got even a whiff of Erb’s exhaust fumes.

The red-hot Brandon Overton of Evans, Ga., who opened five straight nights of competition at the 4/10-mile oval on Tuesday with a $7,000 triumph in the first I-80 Nationals preliminary feature, started and finished third. But he slipped to sixth on the opening circuit and didn’t climb back to the final podium spot until he passed Hughes off the inside of turn four heading to the white flag.

Hughes, 20, settled for fourth as his PCC Motorsports mount’s setup went away slightly during the race’s second half. Ricky Thornton Jr. of Chandler, Ariz., completed the top five after making a late charge around the track’s extreme outside lane that brought him to fifth with a lap-48 pass of Headingely, Manitoba’s Ricky Weiss.

Hot off a checkered flag in Wednesday’s 30-lap preliminary feature that was his third of 2021 on the Lucas Oil Series but first since January, Erb picked up right where he left off. He surged to the lead at the start and imposed his will on the field from there.

“Things are going my way I guess,” said Erb, who recorded his 13th career win on the Lucas Oil Series. “After last night it put me on the pole, and then I was able to get the lead initially. I think that was really big, especially since there was no cautions. I didn’t have to race anybody except lapped cars.”

With Erb building an enormous advantage, he had plenty of leeway in dealing with slower cars.

“It’s so weird when you run down there (turns three and four), because I could drag the brake a little bit and get it bent and leave really, really low,” Erb commented. “That’s how I’d pass some of them lappers, and then sometimes I guess I’d get a little impatient and I’d just floor it in from of them and just let it wash up the racetrack and then chop ‘em in the next corner.”

Erb knew no one was close to him as the feature wound down, but the final circuits still brought him some anxious moments.

“With two to go (crew chief Randall Edwards) was shaking the (signal) sticks,” Erb said. “I think he was just nervous, but I was like, ‘What the hell man? What do you want me to do?’ Then when I came by at the white flag I could tell he was just like, ‘Do not go to the top and knock the fence down,’ so I just stayed down. I think my last lap was probably a second slower it felt like.

“I just said, ‘I just need to get through here, not have lapped cars spin, nothing crazy happen.’ It happened to me at East Bay (Raceway Park in Gibsonton, Fla., in January) where I was literally coming through turn four (leading) and they threw the yellow (flag) and I was pissed, so when I finally got to the checkered I bailed ‘er off in here (turn one) and I was like, ‘I’m gonna make one more lap just to be sure.’

“I guess we were pretty good,” he added. “The no cautions really helped us. I’m like a rhythm guy, and the more laps I make I can tell when I make a mistake and can make a good lap.”

Erb grasped the significance of his breakthrough triumph that topped his previous career-best first-place payoff of $15,000.

“It’s the biggest one so far,” Erb said of his triumph. “I think it’s technically not a crown jewel, but 30-grand’s 30-grand. Not many people can say they’ve won that.

“It’s just super cool because I feel like after our first year (driving for Best Performance Motorsports in 2019) people expected us to win a lot more last year. We won races but nothing big, and this year we were really, really good out of the gate (four wins in January) and just tried to keep it going.

“Racing’s tough. You get high, you get low … 30-grand’s huge. That’s a lot of money for me, for (team owner) Eric (Brock), for everybody. We drive all over the country and race for $5,000, $7,000 a lot of the time, and that sucks in the grand scheme of things for the guy that pays the bills. So to be able to win (Brock) 30 and put a little money in all our pockets, it definitely makes everybody happier.

“It feels good,” he added. “I like winning last night just as much as I do tonight. But at the end it’s like a bigger relief (to win $30,000), and it’s more right to burn the tires down on the front straightaway (by doing celebratory donuts).”

“Whenever I first got to second (Erb) was in some heavy lapped traffic and I kind of had a little bit of clean racetrack,” said O’Neal, who was knocked from Wednesday’s feature by a broken rearend in his Double Down Motorsports XR1 Rocket car while running in the top five. “One time I was able to get closer to him, maybe three-quarters, half-straightaway, and then we got in the same lapped traffic and I just stalled out and we stayed about three-quarters of a straightaway (behind).

“In that situation, whether you’re better or not, you just pray for a caution, and that was kind of what I was hoping for. It just didn’t work out.

“Had the caution come out would I have competed? I don’t know. Maybe, maybe not,” he continued. “I felt like I was pretty good, but (Erb) was able to start on the pole and jump out to an early lead and just kind of get out there a little ways. It played into his hands being caution-free and everything, and he drove a great race and he had a really good race car.”

“Honestly, I felt like we were good at the end,” Overton said of his David Wells-owned Longhorn car. “I’ve just got to get a little better if I’m gonna keep up with (Erb) down there through the middle. I feel like the longer we run the more my car kind of comes to me, so we’ll see what the big one (Saturday’s $53,000-to-win Silver Dollar Nationals) brings.”

Notes: Erb’s previous personal-best $15,000 victories came on March 31, 2019, at La Salle (Ill.) Speedway and earlier this year on Jan. 30 at East Bay Raceway Park. … Shane Clanton climbed as high as third early in the feature before fading to 10th in the final rundown. … Lucas Oil Series points leader Tim McCreadie of Watertown, N.Y., was never a factor in driving to a 14th-place finish. He saw his edge in the tour’s standings shrink to 45 points over Jonathan Davenport of Blairsville, Ga., who finished a quiet ninth. … McCreadie was the final driver on the lead lap at the finish of a feature that saw 28 of 31 starters running at the checkered flag. … The caution-free A-main took just over 17 minutes to complete and ended at 10:30 p.m. CT.

The 53-lap I-80 Nationals finale will follow the running of the 24-lap stock car feature, which took the green flag at 9:24 p.m. CT. ... Tyler Erb starts the feature from the pole position after his Wednesday feature win powered him to the top nightly points total of the two preliminary programs. … Tim McCreadie, who won last September’s inaugural I-80 Nationals, starts 14th following a rough Wednesday outing. His car’s throttle hung open during time trials, causing him to slam the turn-three wall and failed to record a qualifying circuit; he rallied with his second Paylor Motorsports machine to transfer to the feature through the B-main but had to rely on his Tuesday results to lock into the headliner. … Stormy Scott contended for victory in Wednesday’s A-main until a tire that sealed over during a mid-race caution caused him to lose touch with Erb and ultimately settle for fifth. He said he felt like he had a “long-distance” car, buoying his confidence as he starts the 53-lapper from the eighth spot. … Frank Heckenast Jr. (ninth starter) and Kyle Bronson (13th starter) repaired significant damage their cars sustained in Wednesday wrecks. Heckenast climbed over the right side of Allan Hopp’s car during a B-main while Bronson was involved in a multi-car feature scramble between turns three and four that tore up the right side of his No. 40b. … Chris Ferguson grabbed the final transfer spot in Thursday’s first B-main, putting him in the feature field after he missed both of the preliminary A-mains by one position. … Receiving provisional starting spots for the feature were Bill Leighton Jr., Charlie McKenna, Jake Neal and Ben Schaller. … The 31st starting slot in the I-80 Nationals goes to Daniel Hilsabeck, who opted to take the berth in the feature rather than the $2,000 prize for winning the non-qualifiers’ race. He overtook Ross Robinson on a last-lap restart to capture the 20-lap last-chance event.