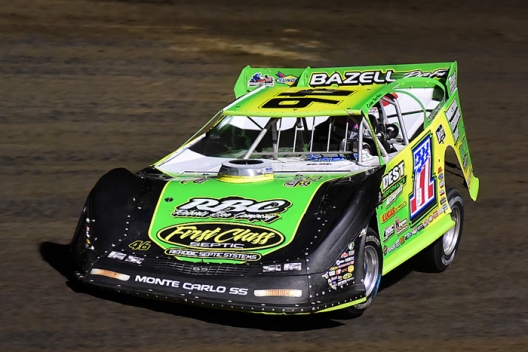 GREENWOOD, Neb. — Winless on the Lucas Oil Late Model Dirt Series since January, Tyler Erb of New Waverly, Texas, ended his tour drought with a statement Wednesday at I-80 Speedway in capturing a $7,000 prelim at the Al Belt Custom Homes I-80 Nationals.

Erb's flag-to-flag triumph gave him his third tour victory of the season, 12th of his career and earned him the pole position for Thursday's $30,000-to-win I-80 Nationals finale.

"I'm glad we finally got one here," the 24-year-old said in victory lane. "I led a bunch here last year and just kind of let it go. We're going to work on it a little bit more tomorrow and see if we can't get it better."

Erb kept his pursuers in check and crossed the finish line 1.030 seconds ahead of runner-up Ricky Weiss of Headingley, Manitoba, who held on to finish second after a late-race battle with 13th-starting Ricky Thornton Jr. of Chandler, Ariz. Tuesday's preliminary winner Brandon Overton of Evans, Ga., was fourth with Stormy Scott of Las Cruces, N.M., who held the second spot the first 21 laps, settling for fifth.

"Honestly, after last night, I think everybody was racing for second (behind Overton). We just worked on our car as best we could," said Erb, whose previous series victory came Jan. 30 at East Bay Raceway Park in Gibsonton, Fla. "I mean, I wanna thank Brandon for coming in here and whipping on us, because it makes everybody start working harder."

Erb survived a few restarts, including one with seven laps remaining when crew chief Randall Edwards had signaled that the competition was hot on his heels.

"Right before they threw the caution, I saw his sticks closed up," Erb said. "I didn't think anyone was making ground (in turns one and two). I just got to going to slow around the bottom (in turns three and four). I was probably going to move up that lap, and then it just kind of made it a little bit easier in my mind. I didn't feel like I was getting through (turns three and four) better all night, you know? (Turns one and two) I felt like I was making more speed.

"But you know, Randall, he's good at what he does, and it's a lot of work that goes into this. We've definitely been working really, really hard ... that's starting to pay off, I guess."

Weiss, who will start outside the front row alongside Erb in Thursday's 53-lap feature, steadily improved from his sixth starting spot.

"We were really good on long runs and I think he was a little bit better on the short runs. I definitely didn't want to see that (lap-23) caution ... we definitely had a good run on the long run and I'm just proud of my guys," he said, adding he was glad to find more consistency.

"Last night, we were able to hold our head high (finishing ninth) and we knew we just needed to be a little bit better. Tonight we definitely proved that, so, yeah, tomorrow will be another day and hopefully we can be standing up here again — maybe one spot better."

Thornton's car suffered damage in an early wreck and he threw caution to the wind with a fence-threatening run the rest of the way.

"That was fun. We weren't quite as good around the middle-bottom as I was hoping. But after that big pileup there in (turns) three and four, I knew I'd knocked the right-rear off it, so it was kind of 'Just go for broke and stay around the cushion.' Almost like a Bobby Pierce-style," he said. "We got up to second there. I was sliding Weiss a couple of times, but I never felt like I was far enough out ahead of where I could run my line again. But to start 13th and end up third, we're definitely happy.

"We kind of threw the kitchen sink at (the race car's setup) today, trying to see what we could learn. And I think we learned in tonight's feature to help us for tomorrow."

Four cautions slowed the action, the most serious on the sixth lap when Kyle Bronson and Jake Neal tangled in turn four with Brandon Sheppard part of the mess up against the fence, too. Josh Richards appeared to spin simultaneously on while Chad Simpson and Scott Bloomquist also spun upon arriving to the wreck.

Neal's car was partially atop Bronson's car and two trucks lifted it up to allow Bronson to back away from the wreck. Both drivers retired.

A first-lap caution appeared for a called-back initial start and again on the ninth lap when fourth-running Hudson O'Neal lost power after sparks flew from the car's rear end. The final yellow appeared on lap 23 when Scott Bloomquist slowed to pull pitside.

The 30-lap feature was set to roll before 10 p.m. ... Spencer Hughes accumulated the most qualifying and passing points, putting the 20-year-old on the pole position for the 30-lap feature. The PPC Motorsports driver will bid for his first-ever national touring series victory. … Tuesday-night victor Brandon Overton will have to work his way forward from the seventh starting spot. … Tim McCreadie, who won last September’s inaugural I-80 Nationals, didn’t register a qualifying time because he slapped the wall between turns three and four. He pulled out a backup Paylor Motorsports mount and rallied to crack the feature field with a runner-up finish in the second B-main. … Tad Pospisil, back in action with another motor after scratching from Tuesday’s feature with terminal engine trouble, experienced more bad luck with a flat tire on the final lap of the second heat. … Chris Ferguson started from the outside pole in Heat 4, but opening-lap contact with Ricky Weiss sent him on a steady fade to a seventh-place finish. He fell one spot shy of transferring to the feature through a B-main for the second straight night. … Frank Heckenast Jr., who finished fifth in Tuesday’s headliner, failed to qualify after tangling with Allan Hopp during the second consolation. A red flag was displayed after Heckenast climbed the right side of Hopp’s car in turn three but no injuries were reported.