Information provided by: Series and track reports (last updated July 19, 11:16 am)
B-Shepp fights off Dillard for victory at Red Cedar 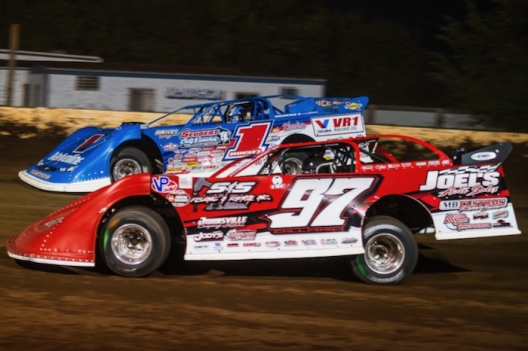 MENOMONIE, Wis. — While they were slicing and dicing for the lead Sunday at Red Cedar Speedway, Brandon Sheppard and Cade Dillard agreed that Dillard probably could've dealt Sheppard a daring slide job to grab the point.

The fifth-starting Dillard edged past the outside front-row starter to lead the 20th lap, but he chased Sheppard amid traffic the rest of the 40-lapper, setting for a runner-up finish 1.571 seconds behind at the checkers after a two-car breakaway.

Chris Madden of Gray Court, S.C., was a straightaway behind in third at the finish while hometown driver Jimmy Mars was fourth. Ricky Weiss of Headingley, Manitoba, who led the first seven laps from his pole position, ended up fifth after losing a spot to Mars on the final lap.

Calling WoO's Upper Midwest six-race tour his "favorite stretch" of the national series season, New Berlin, Ill.'s Sheppard also in victory lane thanked "my great crew that thrashed all day to put this thing back together after I tore the heck out of it last night."

Sheppard got rolling on the high side to blow by Weiss, but Robeline, La.'s Dillard quickly dropped Weiss to third and began challenging Sheppard before the halfway point.  Sheppard regained the point on lap 21 after Dillard nipped him at the line a lap earlier, but he knew he was vulnerable to Dillard's challenges in the second half of the race.

"Oh man, lapped traffic was really tough. I watched Cade in the heat race there and he was all over Jimmy (Mars) and I knew he was going to be tough in the feature. So good job to (Dillard) and good job to Chris (Madden). Man, they're both really fun to race with there," Sheppard said. "Cade drove me really clean. He probably could have slid (under) me there a time or two, but like I said, he drove me really clean, so thanks for that."

"I could get to him, but if I got any closer I couldn't really turn," said Dillard, back to health after missing a race the previous week after a bout with food poisoning. "A couple of times I messed up and got into the wall. I felt decent when I could run like through the middle ... and felt like I could make up a little ground.

"I got that one good run in lapped traffic there and might've been far enough to slide him, might not have. He always runs me clean, so I was going to make sure I done the same. We'll take it. It's been a rough year, so it's rewarding to finally be turning it around a little bit."

Madden, who started ninth and worked his way to the front, couldn't quite get close enough to mix it up with the leaders.

"I was just running that middle-bottom there," Madden said. "We ran those guys down there, then that lapped traffic kind of lined up in my line I'd (been) running and I thought I was going to be able to give them guys a run for their money.

"Them lapped cars lined up in front of me and kind of slowed my momentum down there, and we were able to get around 'em and then, you know, they had stretched back out on me a little ways."

The 40-lapper was slowed by three cautions among the first nine laps, the first for the second-lap engine problems of Frank Heckenast Jr., winner of the previous night's event at I-94 Sure Step Speedway in Fergus Falls, Minn.

A lap-four caution appeared for the turn-two spin of Boom Briggs and a ninth-lap yellow appeared when Nick Panitzke and Steve Laursen tangling at the turn-four exit with Laursen spinning into the infield.

Notes: Three of Sheppard's four WoO points victories in 2021 have come in Wisconsin. ... Besides Red Cedar, he won at Fountain City's Mississippi Thunder Speedway on May 7 and Superior's Gondik Law Speedway on July 13. ... The feature started about 9:15 p.m. ... Ashton Winger was scheduled to start seventh in the feature, but engine problems prevented his No. 12 from competing. Winger drove the No. 28 of hometown driver Sam Mars, the son of his chassis builder Jimmy Mars, but had to start on the tail because he ran a second car. He finished a lap down in 16th. ... The A.J. Diemel was again piloting Minnesota driver Chad Olsen's No. 10c Late Model and ran as high as sixth after starting 12th. He finished seventh. ... Brett Shafer inherited a victory in the night's Limited Late Model feature when apparent flag-to-flag swinner Joe Provinzino was disqualified for failing to report to post race tech.