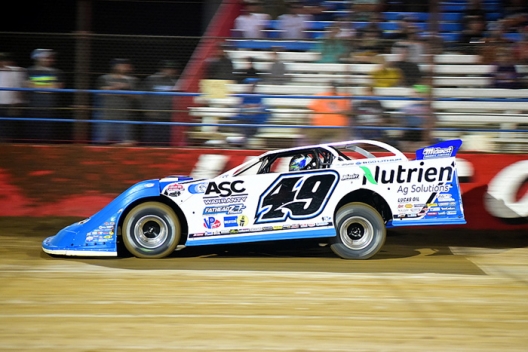 WHEATLAND, Mo. — On a night when the reigning series champion and two of the top three points contenders ran into trouble, Jonathan Davenport was counting his blessings — and $15,000 in earnings — in victory lane at Lucas Oil Speedway.

The Blairsville, Ga., driver avoided trouble on an attrition-filled night at the CMH Diamond Nationals and, as race-long leader and last year's champ Jimmy Owens found trouble on lap 29, led the rest of the 50-lapper for his sixth Lucas Oil Late Model Dirt Series victory of the season.

The fourth-starting Davenport kept 16th-starting Josh Richards of Shinnston, W.Va., and Kyle Bronson of Brandon, Fla., in check late in the race for his 56th career victory on the national tour on a night where rain pushed back the night's action and provided a rugged surface requiring a red flag to allow drivers to swap muddy helmets.

"Those guys are really good in these conditions and this place never did slow down at all," Davenport said."I was figuring like maybe it would get a little black streak here and there, but it never did. You just had to search around and it finally started getting a little bit choppy there about halfway on, so you had move around just a little bit off the bottom. I was a little bit better right through the middle through (turns) three and four, but still you had to come back and hug the bottom off of (turn) two."

Davenport took the checkers 1.407 seconds ahead of Richards with Bronson in third. Pole-starting Stormy Scott of Las Cruces, N.M., held steady to finish fourth, his first top-five finish on the series since April 18, while Earl Pearson Jr. of Jacksonville, Fla., rebounded from a lap-five spin to finish fifth.

The race was as noteworthy for several drivers who ran into trouble in a race where only half the 26-car field completed 50 laps and just 15 were running at the finish.

Newport, Tenn.'s Owens led the first 28 laps, but just after Davenport took the lead exiting turn two, Mason Oberkramer's car appeared to lose power on the backstretch and Owens ran underneath the No. 93, causing nosepiece damage that forced Owens to pit. Third-running Shane Clanton was also caught up in the aftermath and pitted for repairs, returning to finish ninth.

Series points leader Tim McCreadie of Watertown, N.Y., struggled, started in 10th and dropping back to 20th before a lap-18 pit stop under caution. He was part of a lap-41 wreck and ended up 12th. And Hudson O'Neal of Martinsville, Ind., who entered the race tied with Davenport for second in the points chase, was in the middle of a pileup on lap-28 restart and retired in 19th.

Davenport didn't see what befell Owens, who is winless in 2021 after 12 victories in last year's title-winning season.

"Man, he's got the worst luck in the world," said Davenport, who chased Owens from the second position from laps 18-28 before taking command. "I hate it for him. He probably had the best car."

But he was glad to stay ahead of Richards and Bronson, who was making up ground on Davenport before a caution with nine laps remaining spoiled his momentum.

Richards barely survived his tangle with O'Neal on the lap-29 restart. Their cars got hung together battling for sixth entering turn three and triggered a pileup that collected Garrett Alberson, Spencer Hughes, Daniel Hilsabeck, Jason Papich, Tyler Erb and Chad Simpson. O'Neal's car was towed off the track.

"There was a lot of attrition there and Hud and I were racing hard down into (turn) three and I was low and he was in the middle and we got stuck there. I hate it for him," Richards said. "Jonathan did a great job. I felt like we had a car good enough to win if we'd gotten out front and got clean air, but we'll certainly take it."

Bronson felt he was in position to win but still logged his fourth consecutive top-five finish during an impressive summer stretch.

"My guys have been busting their butts, Tanner and D.J., they've been working really hard, so you know I want to get them a win there." Bronson said. "We had a pretty good car, really. I was just kind of riding there at the beginning and didn't want to blister no tires as fast as the track was. We was running good and I started running (down) Jonathan there with about 10 laps to go, I felt like I started running him down pretty good.

"The caution killed me there, but them guys have been good. We should've run second. I got hung up behind a street stock on the last lap, but that's the way it goes sometimes."

Besides the incidents that knocked Owens out of the lead and ended O'Neal's race, the 50-lapper was slowed by three other cautions.

On the 42nd lap, Alberson, Tony Jackson Jr. and Tim McCreadie ended up in a turn-three pileup that turned into a red flag.

Other slowdowns came for the sixth-running Pearson's spin in turn one on the fifth lap and on the 19th lap when last year's Diamond Nationals winner Chris Ferguson slowed with a shredded right-rear tire and retired.

The lap-28 incident involving Owens and Clanton also ended up as a red flag when officials allowed drivers to stop without penalty to change helmets. Several drivers were having vision issues in the muddy conditions.

Notes: Davenport carried the No. 08 on his car's roof as a tribute to Cherryville, N.C., driver Buddy Smith, who died recently. "We let him ride with us tonight," Davenport said in victory lane. ... Davenport previously on CMH Diamond Nationals features in 2015 and '19. ... The series returned to action after losing eight of its previous 10 scheduled events to rain, and Wheatland's race was seriously threatened by afternoon rain that pushed the event late. Officials shuffled the night's racing program to run the Late Model straight through with the undercard divisions hitting the track after the 50-lap main event.