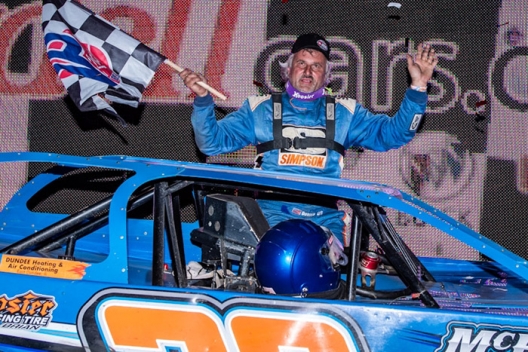 GRAND FORKS, N.D. — What was different for Dennis Erb Jr. on Friday night at River Cities Speedway was a rare run in the high groove.

What was the same for the Carpentersville, Ill. — in recent World of Outlaws Morton Buildings Late Model Series competition — was more success as the polesitter led all but one lap at the quarter-mile oval, turning back a mid-race challenge from fellow front-row starter Jimmy Mars for a $10,000 victory.

Erb captured his second victory in the last three races on the national tour and third in the last 10 as he tallied his ninth career WoO victory.

Normally a bottom-feeding driver, Erb said he was "working pretty hard there" to fight off Mars in the 40-lap main event.

"(Turns) one and two it was getting pretty far around up top. But I could see him get up underneath me there, but we could carry some speed through (turns) three and four," Erb said. "We just tried to keep hitting our marks and got up into some lapped cars and stuff, and was able to get through those pretty quick. I was just glad we could get (to the finish) and win this one."

Menomonie, Wis.'s Mars, who led the 22nd lap by eight-thousandths of a second and ended up 1.858 seconds behind at the finish, fell shy of his first WoO victory since 2016 with a runner-up finish over series rookie Ryan Gustin of Marshalltown, Iowa. Cade Dillard of Robeline, La. — back in series action after an illness sidelined him from Tuesday's event at Superior, Wis. — was fourth with series points leader Brandon Sheppard of New Berlin, Ill., rounding out the top five.

Erb, whose only previous stretch of three national touring victories in such short succession came in 2013 amid the first seven races on the Lucas Oil Late Model Dirt Series, is glad to be on a hot streak.

"To be able to start (the season) off a little slow and struggle a little bit," Erb said, "but then start turning things around and having some good finishes and picking up some wins is definitely a momentum changer. Hopefully we're on to something here. We're just going to keep plugging away at it."

Mars made up ground on Erb in the low groove, but he found that's where many of the slower cars were running as the tried to keep pressure on the leader.

"I was pretty decent in the bottom. We caught them lapped cars and I had to move out to the middle, and (I wasn't) real comfortable on the top here. Dennis did a good job, congratulations to him," Mars said. "The car felt pretty good pretty much everywhere, just the lapped cars, a little bit, it would've been nice if they were around the top. But that's all right. We're still happy, I guess, with second."

Gustin, who notched his sixth top-five finish of the season, couldn't quite keep up with the frontrunners.

"We were a little bit (loose-handling) on the right-rear. If I could do it again we'd change a little bit there so we could roll through that middle. It was kind of crumby. If (the track surface) would've cleaned off, I think we've got a got a really good car through the middle. Coulda, woulda, shoulda. Congrats to Dennis and Jimmy," he said. "It definitely makes us feel good. I think we're good enough to win about any night right now. We've just gotta get our qualifying a little bit better where we can start on the front row of them heats. I don't know, we're just going to keep plugging away and do what we can do."

Three cautions slowed the action, the first for a lap-five incident that led Chad Mahder, Jordan Yaggy and Kyle Hammer spinning in turn one. Hammer was towed away and Yaggy retired.

The yellow dropped again two laps later when Brody Troftgruben went over the banking in turns three and four and a lap-12 caution flew for a turn-two spin for Brandon Fuller, who retired.

WoO's swing through the Upper Midwest continues Saturday at I-94 Sure Step Speedway in Fergus Falls, Minn., and concludes Sunday at Red Cedar Speedway in Menomonie, Wis., both $10,000-to-win features.

Notes: With three victories, Erb's 2021 season is his winningest ever in WoO competition. He had two victories apiece in 2007 and 2012 ... He moved past Ricky Weiss to fourth from fifth in the series points chase. ... Eighteen drivers have WoO victories. ... River Cities hosts the Northern LateModel Racing Association next Friday.