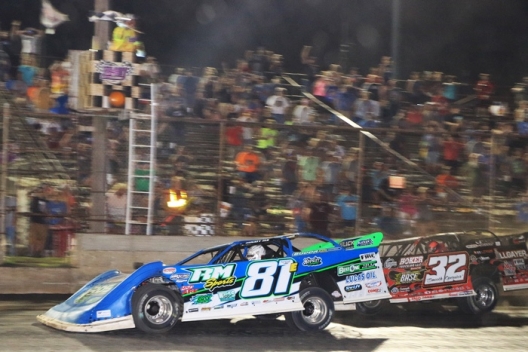 GRANITE CITY, Ill. (June 18) — One night after feeling like a victory slipped through his fingers, Tanner English was determined to flip the narrative.

The 28-year-old standout from Benton, Ky., made good on his goal, driving to a flag-to-flag victory in Friday’s 40-lap DIRTcar Nationals feature at Tri-City Speedway.

But while English came off the outside pole to lead the entire distance, he had to survive a furious final-turn challenge from Bobby Pierce of Oakwood, Ill., to secure his second career Hell Tour triumph and the $10,000 top prize.

After consecutive caution flags on lap 37 wiped out a steady edge of about 1 second that English had been maintaining over reigning Summer Nationals champion Brian Shirley of Chatham, Ill., the Riggs Motorsports pilot found himself in a battle to the finish. Pierce swept around the outside of Shirley for second coming to lap 38 and tried to do the same to English heading to the checkered flag.

English slid up the track off turn four just enough to shrink the gap between his XR1 Rocket car and the outside wall, leaving Pierce, 24, without enough room to slip by. Contact between the cars — Pierce’s left-front to English’s right-rear — was made on the straightaway as English held on to defeat Pierce by a scant 0.133 of a second.

Shirley settled for third place after running in second for laps 3-37, nipping Jason Feger of Bloomington, Ill., by inches in a photo finish for the spot. Four-time series champion Shannon Babb of Moweaqua, Ill., started and finished fifth in his first Hell Tour start of 2021.

English was well aware of just how close Pierce came to stealing the race.

“I didn’t want to make my car that wide, but I had to,” said English, whose only previous Summer Nationals win came on July 3, 2018, at Clarksville (Tenn.) Speedway. “It’s for the win, and I felt like I’d earned that one and I wasn’t gonna give it away.”

English, of course, entered Tri-City’s action with a chip on his shoulder after experiencing a frustrating outing in the previous night’s Summer Nationals top at Kankakee (Ill.) County Speedway. He intimated that eventual winner Devin Moran of Dresden, Ohio, crowded him high when he attempted to make a pass for the lead just before a caution flag flew and then slipped backward on the restart to finish fourth.

“That deal last night, I felt like I had that won,” said English, who began his first attempt at chasing the Summer Nationals title with fourth-place runs in each of the first three series events. “It really took the wind out of my sails. I had (Moran) passed there on the outside and it just disappointed me more than anything. I felt like I had to come back and redeem myself with this one.”

English was well on his way to a convincing victory before the race was slowed on lap 37, first for debris in turn two and then for seventh-place Ashton Winger of Hampton, Ga., slapping the wall off turn-four on the restart. The pause drastically changed the complexion of the feature.

“I definitely did not want to see that,” English said of the caution. “That always kills me, the late caution. I save my tires and they’re not real hot so they don’t take off on restarts. I knew I wasn’t gonna take off. It seems like I can never get my 40 (hard-compound tire) to fire back up.

Shirley offered the first challenge on the final restart, looking underneath English through turns one and two. But then Pierce shot to the outside, grabbed second from Shirley and made a bid for a dramatic victory.

“I felt like I got a good start the first time and then it got called back (for Winger’s incident), and then I started that second time and got a terrible start,” English said. “I could hear (Pierce) and feel him.”

But English repelled Pierce for a win that he wanted “pretty bad.”

“I was thinking, This has happened a million times to me,” English said, “so it’s pretty cool to get it done and just hang on.”

Pierce, who scored a $10,000 Castrol FloRacing Night in America win at Tri-City on May 25, called the 3/8-mile oval’s surface “pretty tricky” on Friday likely due to the extreme temperatures that topped 100 degrees on Friday. He said it “far beyond the normal Tri-City” and “by far the slickest track I’ve ran on in a long time,” but it also had a cushion that, while treacherous, provided him an opportunity for a last-ditch bid over the final three circuits.

“I kind of went for it there,” said Pierce, who started third and ran in that spot for much of the race. “I just happened to get a really good sequence of corners together as far as how the car bounced in the right direction. I sent it in there kamikaze enough just for it to bounce the right way, hit the cushion and get a decent run off.

“I squeezed right in there on Shirley (for second). Next thing it was like one lap to go and we were behind Tanner. I wish he got down the frontstretch coming to the white flag a little bit better because it kind of messed up my entrance into one; I was tucked up under him, and I kind of messed up my exit off two. I was like, ‘Well, we’ll go for it in turn three and four,’ and I had another really good corner.

“I knew it was probably gonna be a tight fit (off turn four). I didn’t know if I could fit around there, but he was coming up and the gap was closing up and that wall that sticks out always gets you.”

The contact Pierce made with the outside wall and English left his car with rearend damage that he would need to carefully check, but he was still smiling after adding a runner-up finish to his two wins and a third to kick off the Summer Nationals.

Seven caution flags dotted the feature. Two were caused by rookie Brandon Lance, who spun on lap eight and 13. Gordy Gundaker, whose family owns and operates Tri-City, brought out the first caution lap three when he slowed with a right-rear tire that was cut down because the wheel spacer wasn’t on the car the tire got into the shock. Other cautions were needed for Mitch McGrath (clipped the wall off turn four while running seventh on lap 16), Allen Murray (spun in turn three), debris (lap 37) and Winger (lap 37 restart).

Notes: English recorded his seventh overall victory of 2021 and third worth five-figures. His previous big-money scores came in May 1’s Schaeffer’s Spring Nationals event at Clarksville ($10,000) and May 15’s MARS Racing Series top at Fairbury (Ill.) Speedway ($15,000). … English’s father, Terry, who was part of Tanner’s crew at Tri-City, owns five career Summer Nationals triumphs, the most recent coming in 2008. … Ashton Winger was scheduled to start from the pole position in the second heat but was forced to scratch due to a broken transmission. He made repairs and rallied from the C-main to move on to the B-main, which he won, and advanced from 17th to seventh in the feature before clipping the wall off turn four when he attempted to make a high-side charge on the first lap-37 restart. … Trevor Gundaker, the younger son of Tri-City promoters Kevin and Tammy Gundaker, saw his night end due to a busted oil line during qualifying. … Due to the day’s record heat predicted, hot laps were pushed back to 7 p.m. … The Summer Nationals returns to Tri-City for a second date on July 23.

Looking to turn a dismal week around, Billy Moyer Jr. of Batesville, Ark., won the second heat and then drew the pole position for the 40-lap main event. Moyer, who is 18th on the Hell Tour’s all-time win list with nine victories, last won a series race on July 13, 2017, at Merritt Speedway in Lake City, Mich. … Tanner English of Benton, Ky., one of 42 drivers with just a single series triumph, will start alongside Moyer on the front row. English has finished fourth in each of the first three Summer Nationals races this season. … Bobby Pierce of Oakwood, Ill., will start third. Among Pierce’s 29 career Summer Nationals victories are two wins at Tri-City, including last season. His other win here came in 2016. … Pierce also hopes to have better luck than he did en route to Tri-City overnight, when his hauler struck a deer on the interstate, knocking out headlights and damaging the air conditioning unit. “I think that (deer) got knocked into outer space,” quipped Pierce, who was not the one driving at the time. … Brian Shirley, fourth on the tour’s all-time win list with 33 victories, will start fourth as he tries to rebound from Thursday, when the of Chatham, Ill., driver crossed the finish in third at Kankakee, but was disqualified for failing to report directly to the scales post-race. … Ashton Winger of Hampton, Ga., missed his heat and was subsequently mired in the C-main after transmission failure, but he rallied to win the C-main and then the consolation as well. … Tri-City has produced back-to-back Summer Nationals winners three times: Billy Moyer (1989, ’96); Shannon Babb (2004-05); and Jason Feger (2009-10). … Babb and Feger are two of five previous series winners at Tri-City among the 38 entries, joining Pierce, Ryan Unzicker and Chis Simpson.