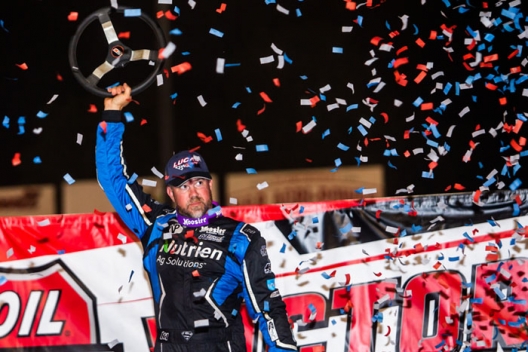 For Jonathan Davenport, the beat rolled on Thursday night as he debuted a new Longhorn Race Car and drove it to a $5,000 Lucas Oil Late Model Dirt Series victory in the 25-lap opener of the Optima Batteries Clash at the Mag Presented by Big River Steel at Magnolia Motor Speedway.

The 37-year-old star from Blairsville, Ga., kicked off the three-day affair at the 3/8-mile oval with his third Lucas Oil Series and 16th overall triumph of the 2021 season. The race’s polesitter was outgunned for the lead at the initial green flag by Kyle Bronson of Brandon, Fla., but gained control on the second lap and never looked back.

“I gotta thank my guys,” Davenport said after climbing from the cockpit of the newest machine in team owner Lance Landers’s Double L Motorsports stable. “We left Eldora (Speedway in Rossburg, Ohio, after the June 9-12 double Dreams) and the guys went back to Longhorn (in Trinity, N.C.) and (Longhorn staffer) Matt (Langston) had this thing probably 60 to 70 percent ready for us and my guys finished it up this week.

Davenport clinched the checkered flag after surviving a late threat from Mike Marlar of Winfield, Tenn., whose pursuit of a seventh career win at Magnolia fell 0.687 of a second short at the finish.

Following the race’s only caution flags on laps 17 and 19, Davenport kept his No. 49 perched in the track’s high groove and stayed a couple car lengths ahead of Marlar’s Ronnie Delk-owned Capital Race Car. The three-time Lucas Oil Series champion wasn’t sure just how close Marlar was to his rear bumper, but he knew he didn’t have much room to spare.

“As much as I was slowing down there at the end, I figured somebody was coming,” said Davenport, who tallied his 53rd career Lucas Oil Series win. “I was looking at (crew chief) Jason (Durham) giving me signals.

“I didn’t really know where to be there at the end. I was kind of searching all over, never felt anything really good, so I was just trying to take up as much racetrack as I could.”

Davenport’s fresh iron wasn’t perfect, but it certainly got the job done for him right out of the box.

“It’s just a testament to Longhorn,” Davenport said. “They’ve really been building some really good cars. I just go in with an open mind and just think it’s gonna do everything I want it to, and so far it has.”

Marlar, 43, didn’t have anything left to give come the end of the A-main.

“Us being out front, we were set up better for short runs and we could really go at it hard,” said Marlar, who started fourth and broke into second with a lap-eight pass of Bronson. “By the end of the race I think me and Jonathan had pretty much wore out stuff out, but it was fun racing with him.”

Marlar found himself looking ahead after his positive run in the Clash at the Mag opener, which continues with another 25-lap preliminary feature on Friday leading into Saturday’s scheduled 60-lap, $15,000-to-win finale.

“We’ll get to go over there (in the pits) tomorrow and work on all the stuff that makes you go fast and not the stuff that just keeps the thing running,” Marlar said. “So having a good finish, coming out of here clean and getting to race out front there and learn about your car a little bit, was definitely valuable and it will hopefully show up at the end of the weekend.”

The 47-year-old McCreadie was just off the leaders’ pace, crossing the finish line about 2 seconds behind Davenport. He drove a Paylor Motorsports car that was in action for just the third time this season and first on the Lucas Oil Series.

“We’re not close enough to run with those (top) two, so we just go back to work,” McCreadie said. “Some of the stuff I’ve been waiting to try, we finally put it all on, and I just got a little too much aggressiveness. I just get a little too bouncy. We just got to somehow get a little control of it and hopefully we’ll be better.”

The race’s two caution flags were caused by contenders who slowed with flat tires: fifth-place Tyler Erb of New Waverly, Texas, blew a left-rear tire on lap 17 while Bronson relinquished third place to a cut tire on lap 19.

Notes: Davenport became just the second driver in 20 Lucas Oil Series events this season to win from the pole position. … Brian Rickman of Columbus, Miss., was the first non-Lucas Oil driver across the finish line, placing eighth after starting 16th at his hometown track. … Spencer Hughes of Meridian, Miss., climbed from the 17th starting spot to 10th in the final rundown driving the PCC Motorsports Longhorn fielded by Craig Sims of Hope, Ind. … Josh Putnam of Florence, Ala., ran in fifth for the feature's first 12 circuits before slipping to 10th and ultimately retiring after 18 laps. ... The first of two preliminary programs didn’t offer Lucas Oil Series points, but drivers do accumulate points in the prelims to align themselves for Saturday’s finale. … Lucas Oil Series regulars Hudson O’Neal and Jimmy Owens did not start the feature after their involvement in a crash during the first heat that left their cars with significant damage. ... The weekend is co-sanctioned by the Comp Cams Super Dirt Series.