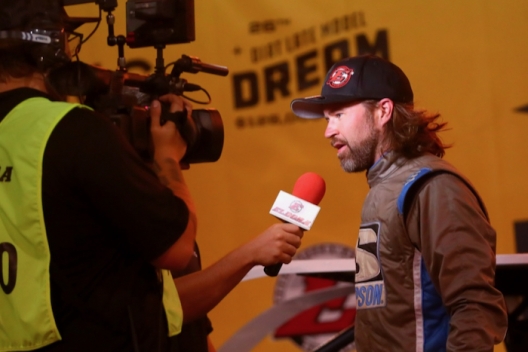 ROSSBURG, Ohio — Scoring the turnaround of the Double Dream week, formerly hapless Gregg Satterlee of Indiana, Pa., overtook Shannon Babb on a lap-17 restart Friday at Eldora Speedway and raced to a $10,000 victory in a 25-lap preliminary feature for Dream XXVI.

The 36-year-old racer, the runner-up in 2017's World 100 at Eldora, reached victory lane for the first time during a major-race Eldora weekend and thanked crew chief Robby Allen for the reversal of his No. 22's dismal performance earlier in the week.

"I know (Allen) wanted to get up here on this stage really bad. I know it's not the big one, but we made it. One way or another, we're up here," Satterlee said. "Today we qualified good and I got a good start in the main event there. There on that restart, I knew that was my chance to get by (early leader) Shannon (Babb). He pushed a little bit off (turn) two and I was able to slide back underneath him. Those lost five laps felt like they were the slowest laps of my life."

Satterlee took the checkers 1.873 seconds ahead of the pole-starting Babb, who led the first 17 laps but got slightly out of shape on the race's lone restart to allow Satterlee's winning move. Seventh-starting Kyle Bronson of Brandon, Fla., charged to third while Jonathan Davenport of Blairsville, Ga., and Chris Ferguson of Mount Holly, N.C., rounded out the top five.

Outside front-row starter Bobby Pierce of Oakwood, Ill., was shuffled back to seventh at the start and never contended, finishing 10th.

Babb jumped out to a comfortable lead early with the third-starting Satterlee quickly grabbing second as they toured the half-mile oval. With Bronson making up ground on the high sides, things tightened up mid-race amid traffic before the race's lone caution appeared on the 17th lap as Mike Marlar ducked to the pits with throttle issues and Mason Zeigler's car showed damage.

With Babb choosing in the inside lane for the restart with Satterlee alongside, Babb's turn-two miscue opened the door for Satterlee, who drove past on the backstretch and dove into turn three to make the winning move.

Satterlee was so bad in Wednesday's Dream XXVIII prelims — 32nd among 37 in his time trial group, eighth in his heat and 10th in his B-main — he and Allen waved the white flag for Thursday's action, spending their time trying to figure out the car and avoiding wrecks so they could aim for a Friday rebound.

"As soon as I saw (Babb) picking up that push, I kind of started to get my car bent to try to aim back underneath him," Satterlee said of the winning pass. "Luckily it took him long enough to get straightened out that I was able to get a run on him down the back straightaway low, and get back in front of him. Once you have clean racetrack, it was much easier. There towards the end, I felt like I was slowing down. My right-front (tire) was kind of giving up on me, but we got it done and held on for 25 laps."

Satterlee called his trip to victory lane "huge," realizing "you get few opportunities to make it up here and it's not easy. Things have to fall your way. I got a good jump on that start, and fortunately Shannon bobbled on the restart, the caution came out. Just a lot of things have to fall your way. You know, (if) the yellow don't come out ... I mean, I was right with him, but I don't think I pass him unless he gets held up in lapped traffic. Just things worked out our way tonight and we'll try again tomorrow and we how close we can get to making it back up here."

Babb knew he was in trouble not long after the lap-17 restart.

"I picked the bottom and I thought that was the right place to be," the Moweaqua, Ill., driver said. "I got a good start on him, but I could see he stayed with me, so I hauled off into (turn) one as hard as I could. I didn't want him to get ahead of me, but I overcharged it too hard and got into a little bit of a push coming off (turn) two and could tell. I was just trying to keep the tires under me and everything. It gave him a good angle and he got by me getting into (turn) three.

"I'll tell you what, I was tickled to death with the car. We started on the pole and I thought, 'Man, if I could beat (outside front-row starter) Bobby (Pierce) out there, I'll be good.' And I was able to do that. Gregg was excellent and once he got in front of me, he had a great car, too. It's so important to be on the front here. I mean, if you're on the front, it seems like your car's dynamite. If you're 30th, it feels like you want to work on it. But anyhow, we're tickled to death. This is the first weekend on this race car and it's been pretty decent every time we've been on the racetrack. We'll take second place and go on to tomorrow."

Bronson duplicated his third-place finish from the previous night's 100-lapper, but he wasn't satisfied.

"Third sucks. Nobody wants to run third, but our car is really, really good, and we're really happy with it," he said, noting his car's strength on the high side.

"I tried to bang the boards as much as I can, there just wasn't much up there tonight. Like I said, overall our car's pretty good. We're just missing a little bit," he said. "We're going to move on to tomorrow and hopefully we get a good starting spot in a heat race and give it all we've got."

The second 25-lap preliminary feature boasts an all-Illinois front row: Shannon Babb and Bobby Pierce will lead the field to the green flag. … Another Land of Lincoln stalwart, Jason Feger, cracked the A-main lineup with a fourth-place heat finish in his backup MB Customs car, rebounding well from his wild flip in Thursday’s B-main scramble. … Josh Richards was left a non-qualifier after breaking a driveshaft in the B-main. … There was extracurricular action in the fourth heat after Dean Bowen and Jeff Mathews tangled between turns one and two. Bowen chased down Mathews under caution and spun him around at the end of the backstretch; Mike Marlar’s car caught a piece of Mathews’s twirling machine as he paced by but was able to continue racing to a transfer spot.

Jason Feger is running his backup MB Customs car after flipping his brand-new machine from Jimmy Mars’s shop during Thursday’s B-main scramble. The Bloomington, Ill., driver is sore the day after the wild accident — he banged his elbow on the interior of his car and bruised his ankle on the gas pedal — but he reported that his car, which he debuted on Wednesday, didn’t sustain as much damage as he feared after he slammed Kyle Strickler’s No. 8 at high speed as it came off the turn-one wall and went off into a series of gyrations; its right-rear frame rails were bent but the roll cage and seat weren’t hurt. … Bobby Pierce stopped on the track twice to bring out caution flags during Thursday’s Dream because of electrical problems. … Jimmy Owens retired from Thursday’s 100-lapper after nearly climbing into the top five at one point due to a right-front suspension trouble. … One day after scoring a career-best Eldora crown jewel finish of third, Kyle Bronson is celebrating his 31st birthday. … Chris Madden has his XR1 Rocket car patched back together after missing Thursday’s headliner because of his involvement in a hard backstretch crash with Jason Riggs in a B-main. … Billy Moyer broke a driveshaft during Friday’s hot laps but his crew installed a new one in time for the Hall of Famer to make his spot in the qualifying order. … Drivers who have scratched from further action this weekend include Jimmy Mars (mechanical), Jason Riggs (heavy damage from a B-main wreck on Thursday), Duane Chamberlain (engine) and Freddie Carpenter.

The format was amended for 24-car preliminary feature lineup. There’ll be a three-car inversion for heats. Among transferrees to the feature, heat winners will make up the first two rows and heat runners-up rows 3-4 (inverted by qualifying time from slowest-to-fastest). Row 5 will be the two third-place heat finishers with the fastest qualifying times (slowest-to-fastest); the other two third-place finishers will be in the sixth row by finish with fourth- and fifth-place finishers in rows 7-10 lined up in order by heat finish. Four consolation transferrees complete the field. …. Officials announced that for the remainder of the weekend any driver who slows or stops on the track to draw a caution but doesn’t have a flat tire with be penalized one lap. In addition, if a driver stops their car on the track after the pace truck leaves the pit area to pick up the field under caution, the offending racer will be put to the rear of the field. … Another notable announcement made by officials during the drivers’ meeting: the cars driven by the top-three finishers in Saturday night’s 100-lap Dream XXVI finale will be impounded overnight in Eldora’s all-purpose building until 12 noon on Sunday. Tech officials will perform a thorough inspection of the cars; there are murmurs circulating through the pit area that one of the items officials will be watching for is traction control.