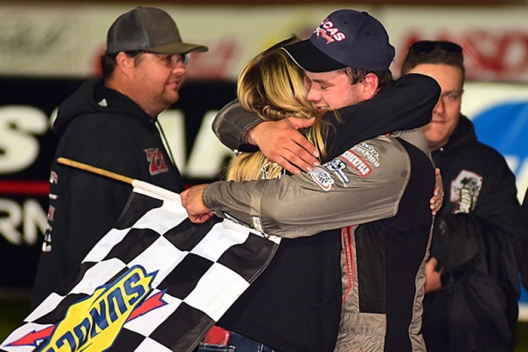 O’Neal, a 20-year-old from Martinsville, Indiana, led the final 33 laps to capture the 29th annual Show-Me 100 Presented by ProtectTheHarvest.com and its $30,000 top prize. O’Neal finished 1.451 seconds in front of New Berlin, Ill.’s Brandon Sheppard, who steered his family-owned No. B5 past Josh Richards of Shinnston, W.Va., for second on lap 89 but couldn’t mount a late-race challenge for the win.

Richards settled for third after starting from the pole and leading laps 1-4. McCreadie, who paced laps 41-67, slipped to fourth in the final rundown while Shane Clanton of Zebulon, Ga., who led laps 5-12, completed the top five in the event co-sanctioned by the Lucas Oil Late Model Dirt Seriesd and Lucas Oil Midwest LateModel Association.

Tears flowed freely as O’Neal emerged from his XR1 Rocket car after executing several celebratory donuts on the track. The Indiana native has been around racing his entire life with his legendary father, Don O’Neal, who won the Show-Me 100 in 2014. They are the first father-son duo to capture the event.

“I looked up at the (video) board with about 15 to go and my signal guy told me they were closing a little bit,” O’Neal said of Sheppard’s late charge. “I wasn’t really making great laps. I got a little antsy, I guess is the word."

O’Neal took the lead from McCreadie coming off turn two on lap 68 and never gave it back. He deftly weaved through lapped traffic the rest of the way and, after his advantage peaked at just over two seconds on lap 83, wound up 1.451 seconds in front of Sheppard as the checkers flew and fireworks exploded over the infield.

In his first season driving for the Double Down Motorsports operation fielded by Roger Sellers of Sevierville, Tenn., O’Neal said the final segment of the race had him gripping the wheel hard.

“I don’t know. I didn’t drive the greatest last 20 laps by any means,” O’Neal said. “Evidently, it was just good enough.”

While Don O’Neal wasn’t at the race track, Hudson said his dad offered some helpful advice following Friday night's double preliminary program. Ironically, it was seven years ago on the night Don O’Neal won the Show-Me 100 that 13-year-old Hudson was making his debut in a Crate Late Model back in Indiana.

“My dad called me last night and gave me some good words of encouragement that we could do this, that I just had to be smart and drive my own race,” said O’Neal, who recorded the biggest win of his career and became the second-youngest victor of a crown jewel event in Dirt Late Model history. “I was able to do that.”

O’Neal was the fifth and final leader in a race that saw four-time winner Jimmy Owens of Newport, Tenn., dominate a good portion in the early going. Owens, starting seventh, took the lead away from Clanton coming out of turn four on lap 13.

Just as he’s shown at Lucas Oil Speedway so many times, Owens exerted command as he weaved through lapped traffic and had a one-second lead over McCreadie when the race’s first caution came on lap 37 as Chris Ferguson slowed on the speedway.

Ferguson, winner of last summer’s Diamond Nationals at Lucas Oil Speedway and coming off a 23rd-to-third run in the nightcap of Friday’s preliminary doubleheader, was closing in on Richards for fifth place at the time he lost power and had to pull into the pits with an apparent broken driveshaft.

After the restart, Owens lost a bit of his momentum and McCreadie applied immediate pressure before he became the race’s fourth leader when he sailed around Owens on the outside of turn two on lap 41.

As the leaders found lapped traffic just past the midpoint, Owens and O’Neal closed in on McCreadie. With the trio separated by less than half a second, action ground to a halt under red-flag conditions on lap 56 when Tyler Erb of New Waverly, Texas, running 17th, slow-rolled his car after tangling with Garrett Alberson of Las Cruces, N.M., and landed roof-side down in turn four to bring out the red flag.

Erb wasn’t injured in the slow roll — and, after his Best Performance Motorsports mount was righted, he drove it to the pit area for hasty repairs and continued on to an 18th-place finish.

Just one lap after the restart, as Owens pressured McCreadie, Jason Papich of Nipomo, Calif., spun in turn four to bring out the second and final caution flag of the feature.

O’Neal slipped past Owens into second as the race returned to green and Richards soon got around Owens for third. Just six laps later, O’Neal took the lead and never gave it back.

“I started fifth and got to fourth there early and they kind of got spread out. We weren’t really making up much ground,” O'Neal said. “Once the racetrack kind of slicked off and you kind of had to show how good your race car was, man, ours shined.

“This is a whole team effort. My dad and everybody is back home watching. I know I have a lot of family watching. I just wish they were here. This is surreal. I don’t think that we’re gonna leave this place tonight.”

Sheppard pulled alongside O’Neal on the cool-down lap and gave him a thumbs-up.

“I was just telling him good job. He deserves it,” said the 28-year-old Sheppard, who took advantage of an off weekend from his World of Outlaws Morton Buildings Late Model Series commitments with the Rocket Chassis house car team to enter his family’s XR1 Rocket at Wheatland. “He’s a tough competitor. He’s a little younger than I am but it’s cool to see young guys get one.

“Last time I was here (in 2017) I was terrible and didn’t even make the show. I figured I’d give it another try and I’m sure glad I did. We had a fast car all weekend.”

After following up his late-night Tribute to Don and Billie Gibson victory on Friday with a career-best Show-Me 100 finish of third, Richards said he “fought the car a little more than we wanted to. I was running about fifth and we got a little momentum there at the end. Sheppie and Hud did a really good job.”

McCreadie, who won the Cowboy Classic that opened Friday’s doubleheader, wound up fourth, one spot shy of matching his career-best Show-Me 100 finish. The  remarked that his Paylor Motorsports Longhorn house car couldn’t match the machines that finished ahead of him after the 3/8-mile oval’s surface become rougher.

Clanton also lost some speed as the racetrack’s early smoothness turned to more choppy conditions, leaving him fifth in the final rundown. It was his career-best finish in four Show-Me 100 feature starts.

Notes: O’Neal recorded his third Lucas Oil Series victory of 2021 and the 10th of his career. The MLRA co-sanction gave him a first-ever win on the regional tour. … O'Neal drew within 25 points of Lucas Oil Series points leader Tim McCreadie in the tour's standings. ... Mike Marlar of Winfield, Tenn., was the race’s hard charger, advancing from the 15th starting spot to finish sixth. … Six-time Show-Me 100 champion Scott Bloomquist of Mooresburg, Tenn., started sixth but was never a factor. He slipped backward, pitted on lap 56 and finished 22nd. … MLRA points leader Tony Jackson Jr. of Lebanon, Pa., finished second in one of the three B-mains, earning his way into the main event without having to use an MLRA points provisional. He ran the entire race and wound up 17th, making him the highest-finishing home-state driver. … Defending Show-Me 100 winner Payton Looney of Republic, Mo., started 32nd in the feature on a past champion’s provisional. Looney had mechanical issues in the first program on Friday and had to borrow a motor from Brennon Willard to continue; he pulled off early in the feature for a 31st-place finish to quietly end his first weekend of competition this season. … Chad Simpson of Mt. Vernon, Iowa, won the Midwest Sheet Metal Challenge, a 20-lap last-chance opportunity to get into the feature. Simpson traded the $2,500 check to start the 100-lapper at the rear of the field and went on to finish 30th, worth $2,000. … During the second B-main, Daniel Hilsabeck of Earlham, Iowa, walked away without injury after taking a wild flip on the front straightaway in a tangle that also involved Jeremy Grady of Story City, Iowa, and Steve Stultz of Peoria, Ariz. … The evening began with opening ceremonies that featured three-time CMA and ACM Country Music Male Vocalist of the Year and Grammy Award winner Lee Greenwood, who served as Grand Marshall. Greenwood sang the national anthem and later, during Show-Me 100 pre-race festivities, performed his iconic song “God Bless the USA,” bringing a gigantic cheer from the large crowd that turned out for the first Show-Me 100 contested on its traditional Memorial Day weekend date since 2018.

Lap 5: Clanton powers around outside to take lead, brings Owens with him.

Lap 13: Owens moves by Clanton in traffic to assume command.

Lap 41: McCreadie wheels around top side to grab lead from Owens.

Lap 56: As McCreadie, Owens and O'Neal begin to battle for lead, red flag flies for a crash that leaves Tyler Erb upside down in turn four. Erb rolled softly after he couldn't avoid a sliding Alberson; he wasn't injured and climbed back in his car after it was righted and drove it to the pits for repairs so he could continue.

Lap 100: O'Neal beats Sheppard to the finish line by 1.451 seconds, earning the biggest win of his career and joining his father, Don, as a Show-Me 100 victor ... Richards finishes third, followed by McCreadie and Clanton.