Information provided by: Joshua Joiner and series reports (last updated May 30, 7:50 am)
Richards runs away with late-night Gibson Tribute
Tribute to Don and Billie Gibson 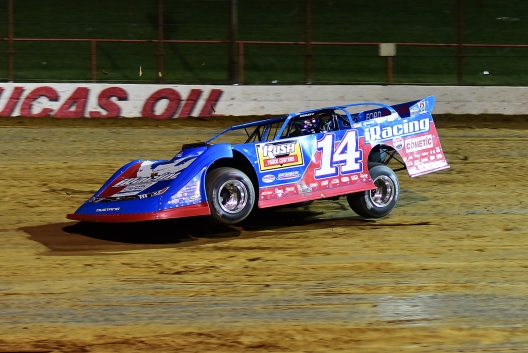 WHEATLAND, Mo. (May 28) — It was a long, excellent Friday night for Josh Richards at Lucas Oil Speedway — especially the second half of the doubleheader of twin prelimenary features that set the stage for Saturday's 29th annual Show-Me 100 Presented by ProtectheHarvest.com.

Richards, of Shinnston, W.Va., followed a fifth-place run in the night's first feature by dominating the Tribute to Don and Billie Gibson program. Taking the lead from polesitter Brian Shirley of Chatham, Ill., on lap six of the 40-lapper, the sixth-starting Richards led the remaining distance virtually unchallenged to beat Shane Clanton of Zebulon, Ga., and hard-charging Chris Ferguson of Mount Holly, N.C., to earn a $6,000 Lucas Oil Late Model Dirt Series victiory in a race that ended at 2 a.m.

"I can't thank everyone with Clint Bowyer racing and everyone on this car enough," said Richards, who start near the front of Saturday's $30,000-to-win Show-Me 100 finale based on event points from the weekend. "The car was really good. I can't thank everyone enough for staying up. We had a great night tonight and we're looking forward to tomorrow."

Tim McCreadie of Watertown, N.Y., took the first preliminary earlier on Friday night, leading all 45 laps of the Cowboy Classic. McCreadie finished seventh in the second half of the doubleheader.

After taking over the lead, not even four caution flags the rest of the way could help the field run Richards down. He held a commanding 4.1-second margin over Scott Bloomquist of Moorseburg, Tenn., when the race's first caution flew at the midpoint when Ryan Gustin of Marshalltown, Iowa, slowed on the front stretch.

It didn't take long after the lap 20 restart for Richards to re-establish dominance as he opened up by 2.4 seconds over Shirley, Bloomquist and Clanton in just two laps and kept building it as that trio slugged it out in a battle for second.

A turn-one tangle between Chase Junghans Manhattan, Kan., and Hudson O'Neal or Martinsville, Ind., who were battling for eighth, brought out a caution on lap 27. That again erased a comfortable margin that Richards had built, 3.7 seconds over Clanton with Shirley third and Bloomquist in fourth.

Once again, it was no problem for Richards, a 33-year-old who's seeking his first Show-Me 100 triumph. Navigating another caution with five laps to go, Richards went on to beat Clanton by 2.26 seconds.

"I was a little bit," Richards said of his level of concern after the late cautions. "It felt like the right rear tire kind of greased up a little bit. My biggest fear was hitting a hole and pushing down in (turns) one and two.

"I was a little conservative on my entry, but after we ran a couple of laps and I was able to widen out and get a little more speed once was got a little bit of gap."

Clainton said he thought he might have something for Richards on the final restart.

"But overall we had a good night and hopefully it puts us in a good spot tomorrow to win this thing," Clanton said.

Ferguson charged from 23rd at the start to finish third. Not only did his North Carolina-based team deal with mechanical issues on the transporter on the way to Missouri, it had to replace the rear-end in the race car following hot laps prior to Friday's second feature.

"We battled all night and had a good hot rod," Ferguson said. "We just needed a couple of more laps. We really like coming out here to this place. If we can put ourselves in a position to start up front, I think we can win that thing tomorrow."

Ricky Thornton Jr. of Chandler Ariz., had the fastest qualifying lap with a time of 14.931 seconds in Group A. Bloomquist paced Group B at 15.371. Bloomquist went on to win his heat race to earn a front-row starting position for the feature.