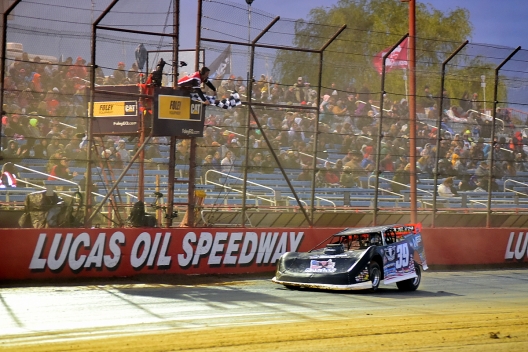 WHEATLAND, Mo. (May 28) - Tim McCreadie, in search of his first Show-Me 100 victory, wasted little time in taking a first step toward it Friday night as he led all 45 laps of the Cowboy Classic at Lucas Oil Speedway.

McCreadie, 47, of Watertown, N.Y., started third and had the lead by the conclusion of lap one. He never gave it back, beating Hudson O’Neal of Martinsville, Ind., by 1.225 seconds at the finish of the first of Friday’s two preliminary events for Saturday’s 29th annual Show-Me 100 Presented by ProtecttheHarvest.com.

Bobby Pierce of Oakwood, Ill., briefly threatened McCreadie midway through the race before settling for third. Polesitter Brandon Sheppard of New Berlin, Ill., challenged McCreadie in the early laps but faded to a fourth-place finish in his family-owned No. b5 while ninth-starter Josh Richards of Shinnston, W.Va., completed the top five in his Clint Bowyer Racing mount.

“This is an amazing weekend to be out here and to be patriotic,” said McCreadie, whose Paylor Motorsports No. 39 was covered with a military-themed “Honor for Heroes” wrap. “If you see anybody from the military, give them a thanks. They’re way tougher than I am.”

McCreadie said it was nice to collect some valuable points toward Saturday night’s Show-Me 100 lineup with the strong start in a race delayed from Thursday due to rain. He earned $6,000 for the victory in the Longhorn chassis house car.

“It helps the bank account,” said McCreadie, who earned his second Lucas Oil Series triumph of the season. “Money's money, no matter what you do. We need to perform.”

McCreadie, the Lucas Oil Late Model Dirt Series season points leader, fought off pressure from the fifth-starting Pierce as the 24-year-old worked the inside groove to cut McCreadie’s lead to .038 of a second by lap 23.

But Pierce, the 2017 Show-Me 100 winner, was unable to keep pace. And it was the 20-year-old O’Neal who tried to mount a late charge after starting sixth.

“By the time I got to second, everybody was spread out,” said O’Neal, who overtook Pierce for the runner-up spot on lap 32. “Not that I was any faster than Timmy, but I would have liked to have had a chance to race him a little bit.

“It took me about 15 laps to fire,” he added. “I was a little too tight early. The car came around as the race track blacked over a little bit. It’s nothing to complain about. We had a solid second-place finish behind an amazing guy. It’s an honor to be on the podium and hopefully we can get one more spot later (in the nightcap).”

McCreadie said that despite what might have looked like a smooth, decisive drive to the finish, he maintained an aggressive mind-set as he weaved through lapped traffic.

“When you see the 32 on the board (Pierce) and then Hudson, those guys don’t take laps off,” McCreadie said. “I just knew the best shot I had was to not wait around and catch a guy and pass. I got beat about a month ago by being a little too cautious at the end of a race.”

Pierce said he can drive more aggressively in the second qualifying program, after getting solid points with his third-place run.

“We already know we’re in good position, but I really wanted to get that win,” Pierce said. “We were closing on T-Mac and he moved down and pulled away from me. After that, I tried some things … maybe the top was still there. Before I knew it Hudson was there and there was nothing I could really do.”

The only caution flag occurred on lap seven when Earl Pearson Jr. slowed on the speedway with right-rear bodywork damage. McCreadie had a two-car-length lead over Sheppard at the time, with a five-car gap back to Pierce in third.

Notes: McCreadie registered his 24th career Lucas Oil Series victory, tying him with Billy Moyer for seventh on the tour’s all-time win list. … It was McCreadie’s second win at Lucas Oil Speedway; his previous success came on May 26, 2017, in the Tribute to Don and Billie Gibson event leading into the Show-Me 100. His best finish in seven career Show-Me 100 feature starts — three at West Plains, Mo., and four at Wheatland — is third, in 2017. … Winning the Cowboy Classic historically is a good omen — the race’s last six victors have gone on to win the 100-lapper three times and never finish worse than fourth. … Four-time Show-Me 100 winner Jimmy Owens of Newport, Tenn., charged from 22nd to finish seventh. … Scott Bloomquist of Mooresburg, Tenn., who has won the Show-Me 100 a record six times, finished 10th in his first action in six weeks. … Chris Ferguson of Mount Holly, N.C., finished 17th after experiencing an eventful trip to Wheatland. His hauler broke down with transmission trouble in Kentucky, necessitating repairs that delayed his arrival until around midnight on Thursday; he would have missed Thursday’s program if it hadn’t been postponed by rain. ... Defending Show-Me 100 champion Payton Looney of Republic, Mo., scratched from Friday’s action with a motor problem following qualifying. Looney’s team soon began making an engine change — putting in a powerplant borrowed from Brennon Willard — to run Friday's nightcap; he has a past champion’s provisional to use if he can’t crack the starting lineup for Saturday's finale. … With Friday’s twin 45-lap preliminary features not offering Lucas Oil Series points, no provisional starting spots were available. ... The checkered flag waved on the Cowboy Classic feature at 8:34 p.m. CT. The postponed modified program from Thursday was then run in its entirety, giving Late Model teams a chance to prepare before the start of the regularly-scheduled Don and Billie Gibson Tribute card.