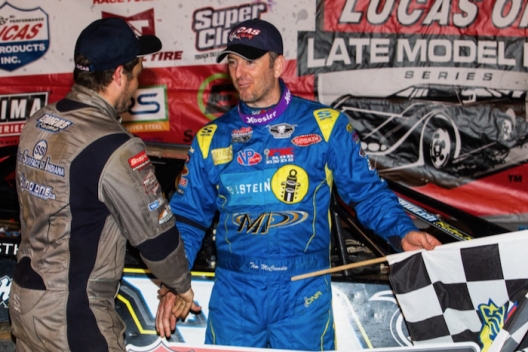 HAGERSTOWN, Md. — Tim McCreadie's first appearance in a Late Model at Hagerstown Speedway was a bit embarrassing when he spun out while warming up the tires in hot laps nearly 20 years ago.

Ricky Thornton Jr.'s Hagerstown debut was much more impressive as he dominated Saturday's 50-lap Nininger Tribute on the Lucas Oil Late Model Dirt Series at the half-mile oval — until the last lap.

That's when McCreadie worked under Thornton exiting turn two, edged ahead on the backstretch and completed his winning pass entering turn three for his first series victory of the season and $15,000, the richest Late Model payday at the track in 20 years. The victory also lifted McCreadie into the series points lead over Hudson O'Neal of Martinsville, Ind., who finished 10th.

"It's a cool night," the Watertown, N.Y., driver said after notching his 23rd career Lucas Oil Series victory. "I love this place and I always have."

Thornton settled for second, 0.424 seconds behind the winner after starting outside the front row and leading 49 laps. Three-time series champion Jonathan Davenport of Blairsville, Ga., rallied from 16th to third while Gregg Satterlee of Indiana, Pa., and Tyler Erb of New Waverly, Texas, rounded out the top five finishers.

While Thornton was virtually unchallenged until the race's final lap, McCreadie labored in second, desperately trying to find a groove that would help him make up ground on the Chandler, Ariz., driver.

"It just took me so long to get going, and when that one yellow came out, I think I slid the tires so much that it maybe chunked the right rear or something," McCreadie said.

But with Thornton struggling to get by the slower car of Devin Moran in the closing laps, McCreadie summoned a final charge that carried him into the lead.

"I mean, I had nothing to lose," McCreadie said. "I'm sure Ricky feels terrible because he probably had a better car, and he didn't have to move that much. I'd been (spending) most of the race kind of diamonding this corner a little bit, going into the middle ... it's just a lot of luck. Another lap it might've been all three of us reversed."

McCreadie dedicated his victory to New Jersey's Petruska family, who he'd driven for once previously in big-block modified competition, after the workplace-related death of Jared Petruska last year. Jared's two brothers were in attendance Saturday and spent the night in McCreadie's pit.

"I'm just so happy. A lot of luck. And like I said, this one's for Jared," McCreadie said. "He looked down and helped me the last three laps."

Thornton, looking to drive to victory lane in his first Hagerstown action, didn't see McCreadie until the last lap.

"I could more hear him than anything," he said. "I kind of got (into the corner) and kind of screwed up a little bit. I almost entered too close to Devin. I just couldn't get by him. I needed to be a little bit better, I guess."

Thornton drove a 3-year-old SSI Motorsports car after the team's primary car was damaged in a wreck the previous weekend..

"Congrats to Tim. It sucks to lose it on the last lap, but we've got really good equipment," Thornton said.

Davenport, who came into the event with non-tour victories the previous two nights in West Virginia and Kentucky, rallied from 16th to sixth by the race's lone caution on lap 26, then zipped from sixth to third on the restart and hounded McCreadie the rest of the way.

"Pretty much what got us to third is what killed us late," Davenport said. "(McCreadie and Thornton) had harder left-rear tires, and once we got rolling there, it made me loose (into the corner). And McCreadie got moving around just enough where he'd take just enough air where I couldn't get to the bottom like I had been. So I tried to roll him on the outside and just overheated by left-rear (tire) even more.

"I probably needed a caution with about 10 (laps) to go. That would've lined us all back up there once I got to third."

Two fourth-place finishers fell from contention at the lap-26 yellow. Matt Cosner of Ridgely, W.Va., gave up the fourth spot when an oil line came loose, forcing him to stop at the end of the frontstretch. Rick Eckert of York, Pa., inherited the fourth spot, but when he saw his engine's air cleaner was about to fly off, he pitted to tighten the screw and retired a few laps later.

Notes: Longhorn Chassis swept the top three spots. "We're gaining steam, all of us Longhorns are gaining steam," McCreadie said. ... The series was in action for the first time since March 21 and McCreadie said he spent the break "trying to stay in shape. I'm not getting any younger than these guys." He lifted weights and spent time on the elliptical trainer along with "trying to not drink as much." ... Overall fast qualifier Kyle Larson of Elk Grove, Calif., suffered terminal engine issues in time trials that sidelined him for the remainder of the evening. ... Jonathan Davenport survived time trials despite a malfunction that left him with no brakes. ... Seventh-place finisher Tyler Bare won the Tracy Anderson Determination Bonus worth $2,541 as the top finishing local driver who also competed in Hagerstown’s season opener. The award, organized by veteran drivers Alan Sagi and J.T. Spence, honored the wife veteran Hagerstown racer Andy Anderson, who died April 5 after a recent bout with health issues. ... Sixteen drivers completed 50 laps.