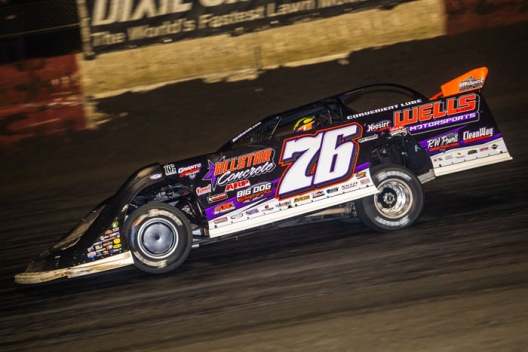 Brandon Overton made sure to remedy that in Friday's $12,000-to-win event.

The Evans, Ga., driver started outside the front row in the 50-lapper, slipped back as far as eighth, then charged back to the front to overtake Tim McCreadie on the 29th lap and lead the rest of the way.

"I was starting to feel like I was going to leave here without winning, and that wasn't sitting well with me," said Overton, the last of five leaders. "So I'm glad I got it done."

Overton took the checkers at the third-mile oval by 0.947 seconds over 11th-starting Tyler Bruening of Decorah, Iowa, who scored his best-ever finish on the national tour. Watertown, N.Y.'s McCreadie, who led laps 27-28 after starting seventh, was third followed by 21st-starting Devin Moran of Dresden, Ohio, and Bruening's Skyline Motorsports teammate Shane Clanton of Zebulon, Ga.

Besides McCreadie, the rest of the race's leaders weren't in contention at the finish. Polesitter Brian Shirley of Chatham, Ill., led 20 of the first 25 laps but faded before retiring on lap 34. Fourth-starting Jimmy Owens of Newport, Tenn., led laps 8-12 but faded before pitting and finished 11th. And ninth-starting Mike Marlar of Winfield, Tenn., led a single lap (26) but collapsed after losing the lead to McCreadie.

Overton, who dropped outside of the top five from lap 11 to nearly midway through the 50-lapper, said his timing was right when he got back to third in chasing Marlar and McCreadie. After three podium finishes earlier in the week, he was hungry for a victory.

"I just got the lead there at the right time, right before (the track) started streaking up," Overton said. "But I knew if I just kept hanging around the top three, I'd get us one before the end of the week."

Bruening never took a serious shot at Overton, but he was all smiles after the race.

"We've been really good. ... earlier this week we got tangled up in some stuff I didn't really think was our doing. We've had really good. It's just up to the driver now to put it all together," he said. "I'm thrilled right now."

McCreadie said he still needs "to get a little bit better" to find victory lane.

"Once (the track) cleans up a little bit, we seem to get a lot better. Which is cool. This place, it's probably the most frustrating racetrack in the country for me personally."

He also felt bad for contact with other competitors.

"I owe (Billy Moyer Jr.) an apology," McCreadie said. "I shot into (turn) three and missed the corner and knocked him out of the way. He didn't deserve that. And obviously Boom (Briggs) early in the race, I didn't expect him to come down, and I got into him, too. I'm a big enough boy to apologize when I make mistakes."

The race was slowed by a spate of six slowdowns over a 12-lap stretch, the most serious for a red flag when Chase Junghans ended upside down in a turn-four tangle with Mason Zeigler on the 31st lap. Junghans was OK after climbing from his car that ended up atop Zeigler's machine and the drivers had a tense discussion at the site of the incident.

Minor yellows appeared laps 20 and 25 and then again on lap 27 when top-five runner Bobby Pierce slowed with a deflating tire.

A multicar incident drew a yellow on lap 30 in turn four — just after Overton took command — when Junghans and Frank Heckenast Jr. spun together, collecting other drivers including Jonathan Davenport and Tanner English.

The final yellow came when Heckenast spun in turn one on the restart following the Junghans-Zeigler wreck.

The Wrisco Winternationals wrap up Saturday with a $15,000-to-win event.

Notes: Brandon Overton solidified his Lucas Oil Series points lead, but his 2021 plans didn't include following the national tour for his Wells Motorsports team. "Me and the old boss man (David Wells) will sit down and see what we want to do," Overton said. ... Of the nine Speedweeks races, Lucas Oil is counting a driver's best five points performances. ... Boom Briggs got up to second on the 15th lap and hung in the top five through halfway before falling from contention and retiring late. ... McCreadie took the third spot from Moran on the final lap.

Tuesday's feature winner Tyler Erb of New Waverly, Texas, was disqualified for the remainder of the program by series director Rick Schwallie after retaliating against runner-up Mason Zeigler on the cool-down lap following the fifth heat. Erb took exception to Zeigler's aggressive turn-three pass to take the second spot from Erb, and Erb slipped back to finish fourth in the prelim. Lucas Oil tech director Steve Francis went to Erb's hauler after the heat. ... Friday's feature olesitter Brian Shirley of Chatham, Ill., is looking for his fourth top-five finish of the week; he also has twice set fast time. ... Bobby Pierce of Oakwood, Ill., has won heat races in each of his three entered events, but he hasn't finished better than 16th in his first two features. ... Heading into the sixth Lucas Oil feature of the season, none of the top three drivers in series points last season (Jimmy Owens, Tim McCreadie and Jonathan Davenport) are among the top 10 in series points. ... Davenport's rough week continued with a subpar qualifying effort and his involvement in a first-lap heat-race accident that damaged his car's right-rear spoiler. He clipped Colton Flinner as the Pennsylvanian's car came off the turn-two wall. ... Brandon Sheppard and the Rocket Chassis house car team had to scramble after hot laps to replace a fuel regulator.

A sunny but slightly cool day — Friday’s high temperature was in the upper 60s — greets attendees for Friday’s program, the next-to-last night of Winternationals action. … Friday’s car count numbers 77, down just one from Thursday’s high for the week. … With his victory in Thursday night’s held-over 40-lap feature, Josh Richards of Shinnston, W.Va., registered his first East Bay Winternationals triumph since 2017 and the eighth of his career to move him into a tie for fourth with Scott Bloomquist of Mooresburg, Tenn., on the event’s all-time win list. Even more notably, the 32-year-old driver’s 29th overall Georgia-Florida Speedweeks checkered flags rank him third on the mid-winter racing stretch’s all-time win list behind only Hall of Famers Billy Moyer of Batesville, Ark. (62) and Bloomquist (30). … Stormy Scott of Las Cruces, N.M., pulled off a Winternationals rarity with his victory in Thursday’s regularly-scheduled feature, becoming the first driver since California teenager Tyler Reddick in 2011 to record a first-ever Dirt Late Model win of any kind during the Winternationals. … Tim McCreadie of Watertown, N.Y., appeared primed to turn around his moribund week at East Bay after driving his second Paylor Motorsports car — his primary machine was knocked from further Speedweeks action by a hard crash on the opening lap of Tuesday night’s feature — to a third-place finish in Thursday’s first 40-lapper and settling into the top five during the postponed nightcap. But his misfortune returned when his car’s worn-out right-rear tire blew on lap 29 as he ran fourth and he was swept up in a tangle after returning to the track that ripped off his right-front fender. “Just frustrated,” McCreadie mourned while standing in his trailer afterward. … Defending Lucas Oil Series champion Jimmy Owens of Newport, Tenn., also had his first promising run of the week go bad in Thursday’s held-over feature. After twice having a caution flag negate his passes for the lead, Owens absorbed contact from Richards to his car’s right-rear rounding turns three and four while battling for second on lap two and pulled off the track three circuits later due to the damage. … Bobby Pierce of Oakwood, Ill., who joined the Winternationals field on Wednesday, is using a Vic Hill Racing Engine for the first time this week. He stopped at Hill’s shop in Tennessee en route to Florida to pick up the powerplant. … Veteran Midwest driver Jason Feger of Bloomington, Ill., flew in to Florida on Thursday with his wife, Abby, and immediately dived into assisting the effort of his Illinois buddy Brian Shirley.