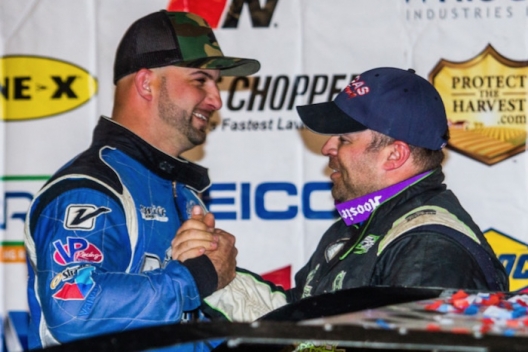 The 31-year-old driver entering his third full season on the national tour charged forward from his ninth starting spot to earn $7,000.

Scott stayed glued to the bottom of East Bay’s slippery third-mile oval through the second half of the race and finished 0.756 of a second ahead of fifth-starting Kyle Bronson of Brandon, Fla., who closed in on the leader in the waning laps, but dared not make an attempt to pass on the inside-dominant track for fear of losing the spot to seventh-starting Tim McCreadie of Watertown, N.Y., who trailed Bronson at the finish to complete the podium.

Illinois drivers Frank Heckenast Jr. of Frankfort and Shirley completed the top five. Heckenast moved forward from the 11th position, while Shirley started third and led four laps before giving way to Scott, who, after series finishes of 11th in 2019 and 14th with only one top-five finish in 2020, was understandably relieved to finally get his first Lucas Oil tour win.

“We probably had the roughest two years I’d say in Late Models there probably is,” said Scott, an accomplished open wheel star with 49 career United State Modified Tour Series victories. “We started at the hardest level and everybody thought we were fools for doing it. You know, I can’t stand defeat and every time we got kicked in the side I guess we just keep going.”

Scott’s best Georgia-Florida Speedweeks finish in nine feature starts last season was 16th while collecting only $3,150 in earnings. He drastically improved both of those stats in just his fourth Speedweeks start this season, but had to use a good measure of patience — much like his first two seasons on tour — to get it done.

After quickly cracking the top five, Scott took advantage of a restart following a lap-four caution to move into the lead, powering by Shirley, who took the lead from Bobby Pierce of Oakwood, Ill., on lap three, with and outside pass. But while the winning move was made to Shirley’s outside, Scott knew he needed to get back to the bottom as fast as possible.

“I knew when I moved up the track just a little bit I couldn’t steer and I started watching in front of me and noticed that nobody else up there could steer either,” said Scott. “I figured even though it felt like I could get out and run faster, as long as I didn’t get off the bottom … if somebody could get by me out in that middle, then they deserved this win more than me ‘cause I just didn’t think you could go up there.”

Only two more cautions slowed the feature. Tyler Bruening of Decorah, Iowa, slowed on lap 13 with significant sheet metal damage, erasing Scott’s 2.513-second advantage over Shirley. On the restart, 14 cars were involved in a melee in turn one, triggered when Heckenast and Shane Clanton of Zebulon, Ga., made contact at the end of the straightaway.

Over the final 27 laps, Bronson managed to close in on Scott, but knew his best move was no move at all.

“Man I think that was the hardest thing I’ve ever had to do in my life, not leave that bottom,” said Bronson. “You know, (Tim) McCreadie I feel like he’s the best in the sport at definitely poking that bottom. Ain’t nobody gonna run that bottom no better than him. I was trying to judge myself off the lapped cars. I just knew if I got off that bottom he was gonna pass me there.”

Bronson thought he was going to get an opportunity for another series win at his home track, but once Scott went to the bottom for good, he knew his chances were slim.

“Stormy did a heck of a job and did everything he needed to do there,” added Bronson. “That one caution when I first passed Brian (Shirley) there he was running through that middle and I thought, man, a couple more laps and I’m gonna be able to pass him. When that yellow came out, I don’t know if (Scott’s) guys told him to go down or what, but he did what he had to do and he won the race.

“I’m pretty excited to see him win. He works really hard on all his stuff and had a pretty tough couple of years. I knew he knew how to drive. I’ve raced modifieds with the guy, so I’m excited for those guys.”

McCreadie said he was simply doing all he could in recording his best Lucas Oil Series finish of the season.

“We just kind of persevered. (The car is) unbalanced,” McCreadie said. “You spend a lot of the night trying to adapt to the way the track is and for us, we hadn’t had a lot of sidebite and a lot of traction so we’re putting it in the car and then you overtighten stuff that I would probably never do anywhere else.

“And then when you come out for the feature and (the track) is shiny and quarter-throttle it just made us way, way tight. But that’s part of racing. That’s what makes it fun. Hat’s off to Stormy and those guys. I know how hard they work. This isn’t easy, so they should savor it, savor the win that’s for sure.”

After showers cut short Wednesday night’s program during the second B-main, the skies over East Bay Raceway Park are clear and sunny today, though the high temperature hasn’t reached 70 and evening conditions are expected to be cooler. … With the completion of Wednesday’s card (four laps of the second B-main, the third B-main and the 40-lap feature) beginning about 15 minutes after Thursday’s regularly-scheduled action ends, tonight marks the first two-feature Winternationals program since Feb. 13, 2016, when Eddie Carrier Jr. and Billy Moyer split victories. … Drivers departing East Bay’s pit area after Wednesday’s show were Ryan Gustin of Marshalltown, Iowa, and Drake Troutman of Hyndman, Pa. Neither driver cracked a feature lineup. … Thursday’s 78-car field is the largest of the week so far. … Freddie Carpenter of Parkersburg, W.Va., has patched up the 2-race-old Kryptonite Race Car he flipped in a Tuesday heat race and will return to action tonight. … Former Winternationals winner Tim Dohm of Cross Lanes, W.Va., will make his first start of the week in his brand-new Longhorn car. His son, Zack, is sitting out Thursday’s competition not only to focus on his father’s effort but also because a valve issue was discovered in his machine’s engine; he’s unsure if engine builder Vic Hill can repair the problem at the track to allow him to race again this week. … Michael Page of Douglasville, Ga., arrived at East Bay today and plans to enter his Stinger Chassis in the week’s remaining events. This evening marks his first-ever Super Late Model start at the third-mile oval. … Ross Bailes of Clover, S.C., is another new entry driving the Ocala, Fla.-based Big Frog Motorsports No. 58. Bailes, whose work responsibilities at his family’s business prevented him from competing earlier in the week, is expected to run the final three nights at East Bay as well as the Feb. 5-6 Ironman Series doubleheadliner at North Florida Speedway in Lake City before returning to his World of Outlaws Morton Buildings Late Model Series Rookie of the Year pursuit during the Feb. 8-13 DIRTcar Nationals at Volusia Speedway Park in Barberville, Fla. … Ray Cook of Brasstown, N.C., has joined the Winternationals field racing as a teammate to Joe Denby of Tullahoma, Tenn. Cook is making his first East Bay appearance since 2014 when he was in the MasterSbilt house car. … Mark Whitener of Middleburg, Fla., is scheduled to start Wednesday’s held-over feature from the pole position, so he’s decided to save his Moseby Racing No. 385 for the nightcap by entering his own No. 5 machine in Thursday’s regularly-scheduled program. … Allen Murray of San Antonio, Texas, who fields the car that Rick Eckert of York, Pa., is running at East Bay, had plans to compete in the Winternationals as well but had to scrap them because a bout with Covid-19 and pneumonia left him hospitalized. He’s improving and is expected to be released as soon as Friday.