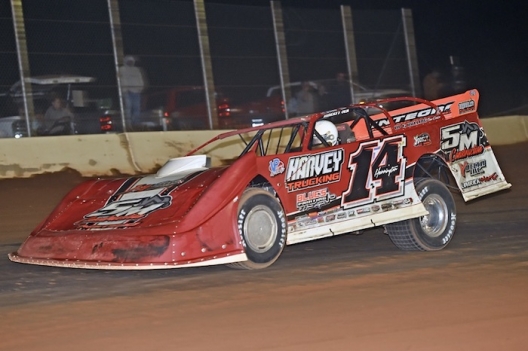 The third-staring Herrington took command when outside polesitter Joseph Joiner briefly tangled with a lapped car on lap eight and survived a rash of restarts as an abrasive track surface caused numerous drivers to suffer flat tires late in the race.

“We were fortunate that we guessed right with our tire choices, and we might have also had a lot of luck the way those tires were going down for others late in the race,” said the 24-year-old Herrington, who after earning his 14th Crate Late Model victory of the season plans to field a Super Late Model in Nov. 28’s $20,000-to-win Gobbler 100 at his home track of Cochran (Ga.) Motor Speedway. “We’ve really been blessed with a great season, and we’re going to race close to home next week, so maybe we can keep our momentum going for one more race.”

Herrington crossed the finish line with an advantage of 1.330 seconds over Joiner, who dropped back as far as fourth after his early mishap in traffic before recovering to finish second. After fading from his fifth starting spot early in there race, Johnny Collins of Jacksonville, Fla., recovered to finish third with eighth-starting Marcus Minga of Shannon, Miss., fourth. Chase Cooper of Perkinston, Miss., advanced from 15th round out the top five in a race that took one hour, 45 minutes to complete and was slowed by 13 cautions.

The marathon race turned into a tire management game as only the top five cars finished the race on the same tires they started. Among drivers falling victim to the track’s treacherous surface were polesitter Jake Rainey of Hiram, Ga., who ran second for much of the race before suffering flat right-rear tire on lap 79. Kyle Bronson of Brandon, Fla., was running second when he slowed with a flat on lap 95, and Monte Skinner of Saraland, Fla., and Ryan Crane of Panama City, Fla., both suffered late flats while running among the top five.

Racing at one of his home tracks, Joiner had his eyes set on keep the $10,000 check close to home, but after losing the lead he knew his best chances were to ride and conserve.

“We held the fort down as best we could, but came up a little short,” said Joiner, a frequent competitor at Deep South whose home in Milton, Fla., is less than an hour from track. “I knew once we lost the lead there wasn’t really any way to try to pass, so it was just try to be there at the end with some rubber on the tire,” said Joiner. “I was just trying to pace myself and make sure if there was gonna be a bunch of flats, I was the last one to have a flat at least."

Making his first trip to Deep South’s 4/10-mile oval, the veteran Collins used his past experience in long-distance races to make sure his right-rear tire was among the few to make it all the way to the finish.

“We started out the race there and the car was a little bit off, so I really had to ride and not slide the car. I knew these tires was really gonna pay the key at the end. In the past, these 100-lappers have been pretty good to me. Settle down and get your strategy right. It paid off for me. We don’t have anything left on the right rear, but it made it. We’re thankful.”

The race was hampered by an extended red-flag period on lap 32 after a scramble on the front straightaway led to a pileup that caused heavy damage to the cars of James Gilmore and Steve Jernigan, both of Milton, Fla. During the clean up, Gilmore approached the car of Mike Lane on foot. Lane, also of Milton, climbed from his car and an on-track altercation between two men followed, leading to both drivers being disqualified from the race.