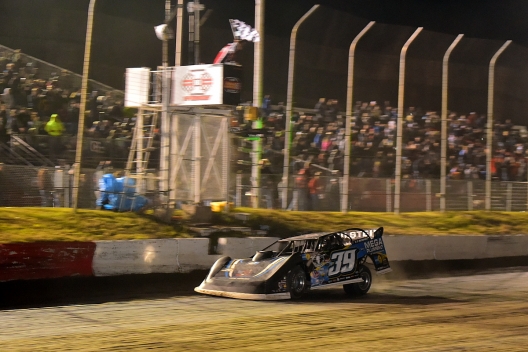 GREENWOOD, Neb. (Sept. 19) — Tim McCreadie saw an opportunity to make a hero-or-zero move in the closing circuits of Saturday night’s I-80 Nationals.

Much to the Watertown, N.Y., star’s surprise, it worked.

“I don’t believe it myself,” McCreadie said when asked afterward to detail how he overtook Jimmy Owens of Newport, Tenn., with a dramatic slider just two laps from the finish to capture the 80-lap Lucas Oil Late Model Dirt Series event at I-80 Speedway.

Positioning himself for his winning pass by running around the middle of the half-mile oval during the race’s late stages, the 46-year-old McCreadie dive-bombed his Paylor Motorsports Longhorn house car to the inside of Owens through turns one and two just after completing lap 77, surged ahead down the backstretch and led the remaining circuits for the $30,000 top prize.

McCreadie recorded his sixth Lucas Oil Series triumph of the season by 0.872 of a second over Owens, who led laps 38-77 in his Ramirez Motorsports XR1 Rocket. Owens, 48, wasn’t able to make a serious attempt to regain command after grazing the backstretch wall on the 78th lap.

Ricky Thornton Jr., a native of Chandler, Ariz., who now lives in Adel, Iowa, finished third after reaching the position on a lap-64 restart. He started 11th in the SSI Motorsports Longhorn car, which he previously drove to a runner-up finish in July 25’s Silver Dollar Nationals at I-80.

Josh Richards of Shinnston, W.Va., settled for a fourth-place finish in the Clint Bowyer Racing XR1 Rocket car after starting from the pole position and leading laps 1-5 and 7-37. With his car becoming increasingly tight as the race wore on, he lost second to McCreadie on lap 55 and third to Thornton nine circuits later.

Kyle Strickler of Mooresville, N.C., completed the top five in his Longhorn mount two days after winning the I-80 Nationals opener for his first-ever Lucas Oil Series victory.

Outside polesitter Brandon Overton of Evans, Ga., also led the race — nosing ahead of Richards to pace lap six — but steadily fell from contention after slipping from second to fourth on lap 30. He pitted on lap 64 and ultimately retired his David Wells-owned machine on lap 70, finishing 21st.

McCreadie, who started fourth, snuck ahead of the third-starting Owens early in the race but found himself chasing the Lucas Oil Series points leader — the only driver ahead of the Empire State driver in the standings — after Owens shot by both McCreadie and Owens on a lap-30 restart.

After the feature’s fourth and final caution period on lap 70, however, McCreadie found the right path to unseat Owens.

“Like I said the other night, it’s very hard to lead (the race),” said McCreadie, who finished second in Friday’s 30-lap preliminary feature after Owens passed him with four circuits remaining to win the $7,000 top prize. “I got to diamonding (turns) one and two pretty good mid-race, and (crew chief) Phil (Snellen) kind of told me where the 20 car (Thornton) was behind me and (crew member) J.C. (Crockett) down there in turn three told me he was running hard through the middle and out. I just thought, Well, Jimmy’s been beating me for 70-plus laps. I might as well try running hard through this middle in three and four and sliding across.

“It just kept the car activated,” he continued, “and I just had a little bit of a run off of four (on lap 77) and I figured, Well, if I’m gonna slide Jimmy Owens I better clear him because he doesn’t hit anybody on the track. I hope I cleared him. I don’t know for sure, but I sent it in there for all I had.”

McCreadie pulled off the slider with aplomb. He struck fast, vaulting past Owens before the 11-time Lucas Oil Series winner in 2020 could react.

“I told him last night, ‘I snookered you,’” Owens said. “But he snookered me tonight.”

Owens, the winner of I-80’s marquee Silver Dollar Nationals in 2013, felt he was bit by the two late caution flags that flew on laps 64 and 70.

“We had a good car,” Owens said. “The longer we run, we could pull them guys. But them cautions just let them guys run to us every lap and give ‘em a shot for the lead there, and (McCreadie) took it. He cleared me and passed me good.

“The middle of the track down here through one and two was actually really, really good, but the top side … I got the lead up there. We moved around all night long. It was up top, down low, and you just really didn’t know where to be on the track.

“It comes with it,” he added. “It made for a good race for the fans there. I was really hoping it would go green to the end there, but oh well, that’s part of racing.”

McCreadie hailed the driver he vanquished to tally his third big-money triumph of 2020.

“We all know it’s been a rough year (due to the coronavirus pandemic), and my hat’s off to the 20 team,” said McCreadie, whose eight overall wins in his first year driving for North Carolina’s Donald and Gena Bradsher include $50,000 scores in June’s Stream Invitational at Eldora Speedway in Rossburg, Ohio, and August’s North-South 100 at Florence Speedway in Union, Ky. “They’ve been able to make us pay all year long. It’s an honor to run behind him all the time because he’s such a class act and they’ve got such a great team.”

T-Mac also had high praise for I-80’s Kosiski family, who not only stepped up to create the I-80 Nationals immediately after coronavirus concerns prompted the cancelation of this year’s Knoxville Late Model Nationals at Knoxville (Iowa) Raceway but also provided teams a typically racy track surface.

“It takes — being politically correct — a big set to host a big-paying event, and these guys decided to have the two best paying ones,” said McCreadie, the 2017 Silver Dollar Nationals champion and fourth-place finisher in this year’s event. “And hat’s off to them.

“Steve (Kosiski) said to us last night, he asked if (the surface) was too slick, and I said it was probably a little slick. He said, ‘Well, I gotta have it better than that.’ He works on this thing like we do our race cars, and I think he made great strides every night.”

Racing just over a week before his 30th birthday, Thornton authored another podium finish in a major event at I-80. He was third after placing second in July’s Silver Dollar Nationals.

“We were good,” said Thornton, who made his first start in the SSI Motorsports No. 20RT since last month’s Topless 100 at Batesville Motor Speedway in Locust Grove, Ark. “I was kind of running around the top, and then I started moving around a little bit, kind of seeing what would happen, and I found the middle. I started charging up through there.

“I really didn’t want that last yellow, but to be able to run third from 11th, we’re excited.”

Four caution flags slowed the event. Billy Moyer Jr. of Batesville, Ark., triggered the first, on lap 10, when he slowed on the backstretch and promptly retired. Later cautions were caused by Chris Simpson of Oxford, Iowa, who slowed on lap 50; Tyler Erb of New Waverly, Texas, who blew a right-rear tire on lap 64; and Jared Landers of Batesville, Ark., who was up to sixth from the 20th starting in his Double L Racing car when he slapped the backstretch wall on lap 70.

Notes: McCreadie pushed his 2020 Lucas Oil Series earnings over the $200,000 mark with his 21st career win on the national tour. … Brandon Sheppard of New Berlin, Ill., was unable to duplicate the late-race charge that carried him to a $53,000 victory in July’s Silver Dollar Nationals. He climbed into the top five from his 12th starting spot by lap 34 but stalled there; he finished sixth in the Rocket Chassis house car. … Hudson O’Neal of Martinsville, Ind., rallied from a lap-50 pit stop to finish seventh while Erb recovered from his lap-64 tire change to place 10th. … Bobby Pierce of Oakwood, Ill., forfeited his scheduled 13th starting spot in the A-main after he failed pre-race tech for a deck height violation. He charged from the rear to reach eighth place before an overheating engine forced him out on lap 45. … After winning the 20-lap non-qualifiers’ race, Jake Neal of Omaha, Neb., turned down the $2,000 winner’s purse in favor of starting the feature. … Receiving provisional starting spots were Tanner English and Tyler Bruening (Lucas Oil Series), Tad Pospisil (Malvern Bank Series points leader) and Ben Schaller (I-80 track champion). … During Saturday’s program Lucas Oil Series officials confirmed the dates for 2021’s Silver Dollar Nationals at I-80 Speedway (July 22-24) and the Knoxville Late Model Nationals (Sept. 16-18).