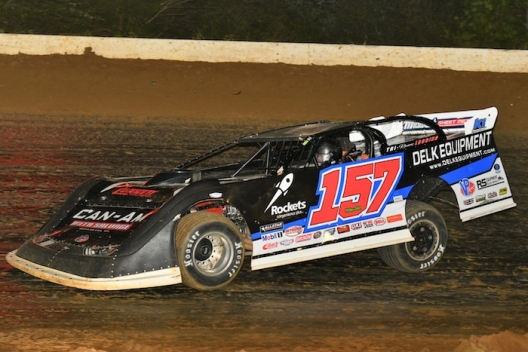 RICHMOND, Ky. (Sept. 19) — Mike Marlar of Winfield, Tenn., pulled away during the second half of Saturday’s Butterball Wooldridge Memorial at Richmond Raceway on his way to scoring a $20,059 payday for his fourth victory in the 3/8-mile track’s Ultimate Heart of America Series-sanctioned event.

The second-starting Marlar overtook polesitter Ross Bailes of Clover, S.C., on lap three of the 59-lap race and turned back Bailes’s bids to retake the lead through a series of restarts before extending his edge as the second half of the race ran green. He successfully navigated heavy traffic during the closing laps on his way to winning by more than a straightway.

“I didn’t know how big of a lead or even if I had much of a lead at all,” said Marlar, who was one of four heat race winners during Friday’s preliminary action after surviving a wild ride in qualifying that saw his Delk Equipment Sales-sponsored Rocket Chassis go airborne on two wheels and nearly flip. “I was getting through those lapped cars as fast as I could. I said before the race I knew there would be some really good competitors. Those guys are really good racers.

"It’s nice to come out on top here after a fun race and fun weekend. It went real clean for us other than a little mishap in qualifying.”

Third-starting Ricky Weiss of Headingley, Manitoba, was second at the finish, with Zack Dohm of Cross Lanes, W.Va., third. Bailes slid back to fourth by the end of the race with 13th-starting Scott James of Bright, Ind., rounding out the top five.

Marlar’s fourth Butterball Wooldridge Memorial victory was his first since 2015. He also won the race in 2004 and 2009.

“Butterball Wooldridge was a legend in Kentucky and one of the best race car drivers,” Marlar said of the late central Kentucky whom the event honored. “Those are the stories you hear when you’re a kid wanting to race and how good these guys were. It’s an honor to win his race. He was a really good racer and deserves the attention he gets 30 or 40 years later here.”

Making his first appearance at Richmond and becoming the first Canadian to start a Butterball Wooldridge Memorial feature, Weiss came on strong late in the race but was too far behind to close the gap on Marlar.

“Early I fell back just trying to get around Bailes there,” said Weiss, who took the second spot from Bailes just after the race’s final caution on lap 25. “I knew Marlar was good. I could tell he was just chilling out trying to save his stuff. I started coming on at the end and figured I’d better go as hard as I can cause you never know if something could break on the last lap or anything. If I had one more caution it could’ve been interesting, but who knows.”

Dohm was looking for his third special event victory of the season at Richmond after earning a pair of $5,000 triumphs in June’s Southern All Stars Series-sanctioned Rain Dodger 50 in July and the Butch Shay Memorial for the Ultimate Heart of America Series in August. But his late charge was only enough to get him by Bailes for final podium spot.

“We came to win, but if you run third to Marlar and Ricky, you’re doing pretty good,” Dohm said. “We’re happy with third. The track threw everybody a pretty big curve ball today. I don’t know, my car was pretty good, I just could never get going on the restarts. It didn’t matter who started beside me, it seemed like they got in front of me for a few laps and I had to race them and then had to catch Ricky and Ross and them guys.”

The race was slowed by six cautions, all coming in the first half of the race. The most significant was a lap-19 caution for second-running Tyler Carpenter of Parkersburg, W.Va. The two-time and defending race winner advanced from his sixth starting spot to run as high as second before spinning with a flat right-rear tire. After pitting for a fresh tire, he again spun to cause the race’s final caution on lap 25 before recovering to finish eighth.

Jason Jameson of Lawrenceburg, Ind., was among the race’s early retirees. He slowed to cause a lap-12 yellow and received a push to the pit area. A lap 13 caution waved for a turn-three tangle involving Tommy Carlton of Lawrenceburg, Ky., and Joe Mayabb of Campton, Ky.

The track announced during Saturday’s driver introductions that the Ultimate Heart of America Series will return to the track on Oct. 31 for the $10,000-to-win Bluegrass Nationals.

Editor's note: Updates with amended date for Bluegrass Nationals; it was originally Oct. 24.