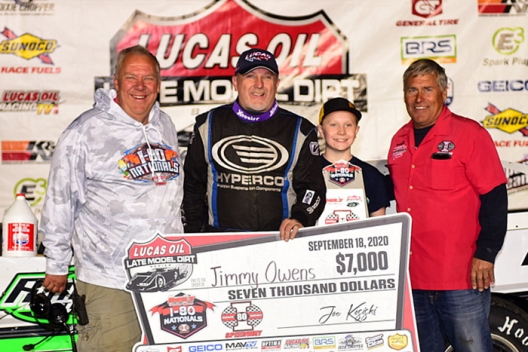 GREENWOOD, Neb. — Jimmy Owens won a $7,000 game of a Duck Duck Goose on Friday at I-80 Speedway on the Lucas Oil Late Model Dirt Series.

Polesitter Brandon Overton was the first sitting duck who lost the lead to fellow front-row starter Tim McCreadie when the groove at the 4/10-mile oval shifted. Then McCreadie was the second sitting duck when Owens found an even better line, taking the lead with four laps remaining for a preliminary victory in the three-night Al Belt Custom Homes I-80 nationals.

"The track was just moving around," Owens said in victory lane after his tour-leading 11th victory of the season. "And for once, we were in the catbird's seat."

The third-starting Owens took the checkers 0.947 seconds ahead of McCreadie as the second night of prelims at I-80 set up the lineup for Saturday's $30,000-to-win main event as Owens continues his march toward his fourth series championship.

Overton, who led the first nine laps before McCreadie went by on the race's lone restart, settled for a third-place finish with Devin Moran of Dresden, Ohio, and Darrell Lanigan of Union, Ky., rounding out of the top five finishers in the 30-lap preliminary feature.

Owens found himself in the perfect position to talk the front-row starters, finding a faster groove on the high side in the final laps to make an outside pass on lap 27, narrowly edging McCreadie at the flagstand and then edging away.

"Timmy was kind of like a sitting duck up yonder. He didn't know where to be on the track. I was able to move around back and forth and get this Ramirez Rocket up front," Owens said, thanking his supporters, sponsors and crew. "It's awesome to get a win here. It gives us plenty of momentum for tomorrow night."

Things weren't looking for Owens so good a week earlier in non-series action at Eldora Speedway in Rossburg, Ohio, as various woes forced him to miss three consecutive feature starts. But his team regrouped at the shop and continued their Lucas Oil assault.

"It just says a lot for our crew. They busted their tails all weekend. We had to go back home after Eldora when we'd planned on heading out this way," Owen said. "We had to work for three days getting everything ready to come out here, and it's just a long driver and all that stuff — it's like 16 hours — but everybody pulled together and got everything done, and here we are."

McCreadie, a distant second in the points chase to Owens, found a faster line than Overton early, but Owens turned the tables on him in the closing laps.

"It's just hard to lead here," McCreadie said. "It's such a big track and wide, and the grooves come and go. You know, Brandon's out there leading the way, leading the way, so he's probably not going to change much up. I figure, well, on the restart, it looked like that little bit of dust off of (turn) two had cleaned up where it wasn't just dirty no more, and I figured ’Let's just see if I can roll the middle to the top and see what it does.’ We were good for a while, it's just the same deal. It took a strip of rubber up there late, and I didn't find it until after I got passed."

McCreadie gets a chance to get the better of Owens in an 80-lapper on Saturday.

"We work hard every night and try to get better. We took a stab at it again tonight," he said. "I don't know if it's what we'll run tomorrow. I'm pretty comfortable. I just had a little trouble in traffic, and I've had that issue a little bit, but all in all, I wish there'd have been another 10 more laps, because it probably couldn't happened (to Owens, too). But that's OK. Hat's off to Jimmy and them guys, and for our team we'll try again tomorrow."

Overton was gunning for a clean sweep of Friday's action after setting fast time and winning the first heat — overcoming a six-car inversion. While he was in solid command early in the main event, he couldn't find enough to regain the positions he lost on laps 10 and 11.

"I think, you know the top up there in (turns) one and two and three and four, it was a fine line up there," Overton said."It started cleaning up pretty good, and when Timmy moved up, and he got me there. Jimmy kind of got me getting into (turn) three. I just got up there too late. But our car was good. It's way better than it was yesterday, so we've got something to work with at least, and we'll go on to tomorrow.

"It sucks starting on the pole sometimes. You're just out there a sitting duck. Like I said, the main thing is ... we should be locked in tomorrow and have us a good starting spot. It's just that these guys are the best. So you can't ever miss. If you miss just a little bit, they get you. But hat's off to all my crew and sponsors for getting us out here, and we'll give ’em hell tomorrow."

Notes: Owens notched his 75th career Lucas Oil Series victory. ... The 30-lapper's lone caution appeared on the ninth lap when 12th-running Tyler Erb stopped with a flat right-rear tire and headed pitside. ... Fifteenth-place finisher Chris Madden of Gray Court, S.C., turned the quickest lap of the race at 18.485 seconds on the final circuit. ... Thursday's runner-up Shane Clanton was leading the fourth and final heat when he pulled up lame with a broken driveline in turn two after two laps; he failed to make Friday's main event. ... Making a start as a second driver for Double L Motorsports, Jared Landers broke an oil line in Thursday's main event. He qualified for Friday's preliminary feature with a consolation victory and finished 17th. ... Three drivers who competed Thursday didn't race Friday. Dylan Schmer of Aurora, Neb., and Tyler Smith of Gibbon, Neb., scratched with mechanical problems while Chris Spieker of Massena, Iowa, missed the event because crew members had high school football commitments.