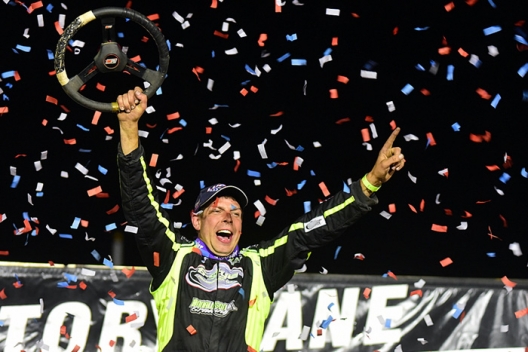 GREENWOOD, Neb. (Sept. 17) — As Kyle Strickler was closing in on a victory in Thursday night’s 30-lap I-80 Nationals opener at I-80 Speedway, he couldn’t help having some flashbacks to the most crushing loss of his racing career just five days earlier.

“Please, no flat right rear tire!” Strickler said when asked what he was thinking as he paced the field during the final circuits of the preliminary feature. “That’s what was going through my mind.”

Strickler, 37, of Mooresville, N.C., had all of his self-owned car’s tires remain intact to the checkered flag — unlike on Sept. 12 when a blown shoe on the final lap of the Intercontinental Classic at Eldora Speedway in Rossburg, Ohio, cost him a $50,000 payday — and the result was a thoroughly satisfying triumph worth $7,000. He passed Shane Clanton of Zebulon, Ga., for the lead on lap 11 and turned back the veteran driver’s final-circuit challenge to register his first-ever national touring series win in a caution-free event.

“Everybody on this team deserves this so much,” Strickler said, the joy of a redemptive victory splashed across his smiling face after his climbed from the cockpit of his Longhorn machine. “All my guys back home. My wife, my kids … they’re watching on TV. My mom, my dad. Everybody that helped me get here means so much to me.”

There was a definite sense of relief in Strickler’s post-race celebration. Coming so soon after his well-chronicled heartbreak at Eldora — and just two days after he set a new track record and contended for victory in Fairbury (Ill.) Speedway’s $15,000-to-win One for the Road before hitting the wall — it was a pick-me-up that Strickler and his team dearly needed.

“It’s just as hard for the crew guys as it is for the driver when something like that happens at Eldora,” said Strickler, who was accompanied to I-80 by his crew chief, Vinny Guliani, and crewman Trey Weaver. “So this will make it a little bit better.

“This race car is so fast. I can’t thank all my guys enough for sticking with me and working their butts off.”

Starting from the pole position after earning the most qualifying points (he set overall fast time) and heat-race passing points (he started sixth and finished fourth), Strickler was outgunned for the lead at the initial green flag by Clanton. But Strickler kept Clanton within his sights and made his move on lap 11, ducking underneath the Georgian through turns three and four to gain command for good.

Clanton, 45, made a strong bid to steal the race on the final lap with an inside charge through turns three and four, but Strickler hung tough to exorcise his Eldora demons.

“Man, hat’s off to Shane,” Strickler said. “He could’ve really sailed ‘er in there and tried to come up in front of me, but he’s a class act and ran around the bottom there. I knew if I could get into one and come off of four there clean we’d be really good.”

The victory set Strickler up for possible greater success in Saturday’s 80-lap, $30,000-to-win I-80 Nationals finale, which will have its first 18 starting positions determined by drivers’ best points night of the two preliminary programs.

“That’s what we’re focusing on, trying to get some money to keep going down the road,” Strickler said of Saturday’s action. “I love doing this. I get to drive a race car for a living, and man, it feels great to win my first Lucas (Oil) race. I really like running this deal and hopefully we can put a deal together to run next year full-time.”

Clanton remained winless on the 2020 Lucas Oil Series, his first as a regular on the national tour. He recorded his fourth runner-up finish on the circuit this season, matching his outings on May 25 at East Bay Raceway Park in Gibsonton, Fla., June 20 at Magnolia Motor Speedway in Columbus, Miss., and Aug. 12 at Florence Speedway in Union, Ky.

“If I went to the bottom two laps beforehand maybe I could’ve cleared (Strickler) over off turn four on the last lap,” Clanton said. “But overall, a good night. Our car’s fast and we caught him there at the end. It’s just pretty demanding (with the half-mile oval’s heavy, fast track conditions) to get up on the wheel right now.”

Clanton wondered whether he drove a bit too conservatively during the feature.

“I thought we done a pretty good job to maintain pace there at the beginning of the race and he just snuck by me on the bottom there,” Clanton commented. “I don’t know if I started letting up a little bit getting in the corner just being timid or whatever, just trying to save my stuff for 30 laps. I looked and it was only like 10, 12 laps into the race and the pace was real fast so I tried to slow it down a little bit. But Strickler, he’s very hungry … a little bit hungrier than I was evidently.”

Richards, 32, might have had a shot at the win if the race had been a bit longer.

“We didn’t qualify the greatest — we were a little snug and the track was greasy and it was a little narrow earlier,” Richards said. “But it got real racy towards the end of this race and our car was phenomenal. I just got held up by a couple cars (early) just racing hard, just stuck behind them in dirty air. Once I cleared a couple cars we were able to move forward.

“I was running as hard as I could run and I looked up and we were catching the the 8 and the 25 and just ran out of time.”

Notes: Strickler’s best previous Lucas Oil Series finish was second, in July 18’s Show-Me 100 at Lucas Oil Speedway in Wheatland, Mo., and Aug. 27 at Port Royal (Pa.) Speedway. … The victory was just the fifth overall of Strickler’s fledgling Dirt Late Model career; his previous triumph this season was a $10,000 score in June 4’s Dirt Late Model Stream Invitational preliminary feature at Eldora. … Driving one of his father Lance’s Double L Racing entries as a teammate to Jonathan Davenport, Jared Landers of Batesville, Ark., finished 24th in his first competitive start since last year’s first preliminary night at the Late Model Knoxville Nationals. He was the feature’s lone retiree after pulling off on lap 16. … Chad Simpson’s qualifying laps were short-circuited when he hit the outside wall between turns three and four, but recovered to grab the third and final transfer position in B-main 2. He traded sliders with Ricky Thornton Jr. through turns three and four on the last lap to narrowly finish third in Larry Moring’s machine. … Earl Pearson Jr. was in contention for the final transfer spot on the last lap of B-main 1 when he ended up slapping the inside wall on the backstretch, ending his night with a trip back to the pit area on a wrecker. He got the worst of a scrape off turn two between Brandon Sheppard and Tad Pospisil that resulted in Pospisil veering to the left and taking Pearson with him toward the inside rail. … Other non-qualifiers included Thornton, who finished second in July’s Silver Dollar Nationals; 2019 SDN winner Bobby Pierce; and Lucas Oil regulars Tyler Bruening and Tanner English. …  The I-80 Nationals’ Thursday and Friday preliminary programs do not offer Lucas Oil Series points nor provisional starting spots.