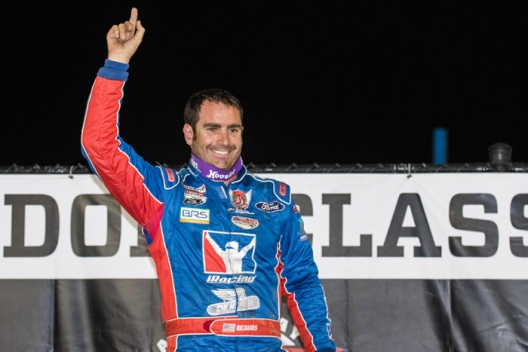 Taking advantage of the complete restart and the clean air offered to the front row starters, Richards then dominated the 30-lap preliminary feature, building a lead in excess of three seconds before a rash of cautions slowed the pace midway through the feature. Richards managed to steer comfortably ahead of Brandon Overton three times following restarts and went on to finish 1.420 seconds in front of the Evans, Ga., driver who started fifth.

“Well we know clean air was gonna be really big,” said Richards. “We unloaded pretty good. I didn’t know where we were after hot laps (because) we didn’t have a (scoring transponder) on but it felt really good. I was a little stuck qualifying and we worked on it a little bit. Luckily, I knew Overton would be on the bottom. I know he fires off well and charges (turn) one really quick so I knew those restarts were gonna be big.”

Outside front row starter Ricky Weiss of Headingly, Manitoba, ran second early, before giving way to Overton and settling for third. Fourth-starting Tim McCreadie of Watertown, N.Y., bounced around the top five before finally fishing where he started, while Chase Junghans of Manhattan, Kan., improved five positions to complete the top five.

Rice jumped ahead of Weiss on the initial start rounding turns one and two. But as Rice rolled off turn two, he immediately slowed, forcing drivers behind him to take evasive action, including Weiss, who grazed Rice's disabled machine with the right side of his car. The yellow appeared — the first of five cautions — as Rice coasted through turns three and four before making the hard left into the pit area to the attention of his crew. After a quick diagnosis, Rice parked his machine.

With Richards joining him on the front row for the second start, Weiss was unable to grab the lead again. Richards shot to the point and quickly pulled away. He stretched his advantage — even as he negotiated lapped traffic — until lap 14 when Zack Mitchell of Enoree, S.C., slowed with heavy damage to the right front of his Barry Wright Race Cars Icon to draw second caution.

Overton took the second spot from Weiss on the restart, while McCreadie recovered after a couple of early bobbles and was back up to fourth. Unable to challenge Richards for the lead excect on the restarts, Overton was happy with his runner-up finish.

“To beat (Richards) I was just too tight,” Overton said. “He could zing that top pretty good and if I got out there a couple times, I pushed the issue and about jumped it and made myself get back down. But second, we’ll take it. The track’s pretty demanding tonight … hard on equipment. So we’re just trying to get as many points as we could and not tear anything up.

“If I could open up my entry up in (turns) one and three a little bit, then I could about turn in high and leave low. Later in the night when the cushion dies leaving over there is kinda where you could make up some time.”

“I was really relaxed out there and we had a great car,” Richards said. “I’ve never doubted my abilities ever, coming to Eldora. I feel like we’ve had a good car, this year anyway we’ve been consistently fast which is just the matter of putting the package together. These guys did a great job, we started off really good. The track is gonna change quite a bit. I live 20 minutes from here and we got a lot of rain this week so I knew the track was probably gonna be fast and it was.”

While he was happy to pick up his third feature win of the season, Richards was also happy to put himself in solid position leading into Saturday’s action, when heat lineups for the $50,000-to-win finale are determined by Thursday’s and Friday’s results.

“It means everything,” said Richards, who has a pair of Lucas Oil Late Model Dirt Series wins this season. “Coming here, I know there’s no points on the line in general, but we want to win at Eldora. I’ve been close a couple times, but to be back up here, even though it’s a prelim win, I mean there’s still 48 awesome cars here and the best in the country and being back on this big stage means a lot and we’ll keep digging at it.”

Four of the five cautions came out between laps 14 and 21. Along with Mitchell’s trouble on lap 14, Mike Marlar of Winfield, Tenn., slowed on lap 18; Gregg Satterlee of Indiana, Pa., had a left rear flat on lap 19; and Kyle Bronson of Brandon, Fla., had a right rear flat on lap 21.

Polesitter Josh Rice is the only driver among the top seven starters who has not won at least one preliminary feature during an Eldora crown jewel weekend. … Ricky Weiss starts second after winning the first heat using an engine provided to him from builder Vic Hill’s personal stockpile. Hill ran Sunday’s Schaeffer’s Fall Nationals event at Tazewell (Tenn.) Speedway with the powerplant in his own car and then it was pulled out and put in Weiss’s machine on Tuesday. … Jimmy Owens was fastest in qualifying and finished second in his heat, but he wasn’t pleased with his car’s performance so he decided to pull out his backup car for the feature. Owens, who will have to start from the tail of the A-main field due to the car change, wasn’t sure what was causing his lack of speed, but, while his team was preparing the backup car, engine builder Vic Hill was already in his pit and working to diagnose the issue. … Chad Simpson was one of the hardest chargers during the heat races, advancing from his eighth starting spot to finish third in the final 10-lapper. Simpson wasn’t surprised by his run. “We were fast in hot laps but just didn’t free up enough for qualifying,” he said. “I couldn’t spin a tire for nothing. I knew we were faster than where we qualified and with the changes we made, it showed.” … Kyle Strickler, who won the Thursday preliminary feature during June’s Stream Invitational, spun wildly off turn four during the fourth heat after his car “went straight” due to a broken bolt in its left-front strut and was yanked around upon hitting the cushion. … Ryan King was sandwiched between two of the top-three drivers in the country — Brandon Overton and Brandon Sheppard — halfway through the second heat when the rearend broke in his Warrior house car. His team made repairs but missed out on a fast-time provisional for the feature. … Fast-time provisionals went to Zack Mitchell and Brandon Sheppard. ... Scott Bloomquist’s 2020 Eldora struggles continued during the fourth heat when he retired early because his car’s battery shorted out; he failed to transfer in the B-main, making him 0-for-4 in this year’s programs at the half-mile oval.

Polesitter Cory Hedgecock pulled away to win the first consolation race over Gregg Satterlee and Zack Dohm. Hedgecock stretched his lead to nearly 2 seconds by race’s end. While Satterlee was comfortably in second, Dohm had to hold off a fast-closing Darrell Lanigan for the final transfer spot. A four-car melee on the opening lap collected Logan Martin, Jerry Bowersock, Matt Miller and Mason Zeigler.

Getting the jump on fellow front-row starter Jason Feger at the start, polesitter Josh Richards pulled away to a big lead early. Richards then held off Chris Ferguson following a restart with two laps remaining, winning by 1.237 seconds. Chad Simpson rallied from eighth to finish third, while Feger settled for fourth. Kyle Strickler spun out of fourth place, drawing a caution on lap eight and puling into the infield. Scott Bloomquist finished four laps down in 11th.

Jonathan Davenport cruised to win the caution-free third heat ahead of Tim McCreadie. Davenport, who won by 0.920 of a second, got a little breathing room when McCreadie pushed up the track, nearly jumping the cushion on lap three. Chase Junghans and Shane Clanton completed the top four.

Brandon Overton drove by leader Josh Rice following a restart on lap six and went on to win the second heat. While Overton pulled away from Rice over the final four laps, there was a scramble for third, with Spencer Hughes getting around Cory Hedgecock and Brandon Sheppard. Chris Madden moved around Hedgecock and Sheppard also as Overton won, followed by Rice, Hughes and Madden. Ryan King slowed on lap six with mechanical trouble, giving up the third spot.

Taking the lead from polesitter Jimmy Owens on lap three following a caution on lap two, Ricky Weiss of Headingly, Manitoba, won Thursday’s first heat race. Weiss pulled away to win by 1.779 seconds over Owens, who finished comfortably ahead of Kyle Bronson. Dennis Erb Jr. advanced from fifth to take the fourth and final transfer spot. Owens grabbed the lead at the start, but was immediately under fire from Weiss. When Jason Jameson slowed to draw a cation on lap two, Weiss took advantage and made the pass on the restart.

On an overcast day, Thursday’s program began with extremely heavy track conditions. Crewmen were busy scraping mud off cars after hot laps, leaving noticeable piles of clay throughout the pit area. … Stream winner Tim McCreadie was the third-fastest qualifier, but he said the track was so fast that no one had enough power to handle it. “You could use two engines under the hood,” McCreadie said. … Several teams were seen making carburetor changes after time trials in search of extra horsepower, including Shane Clanton, Hudson O’Neal and Scott James. “Gotta have some more juice,” Clanton quipped. … Brian Shirley broke a motor during his qualifying run and is likely done for the weekend. Shirley, who only brought one car to Eldora, has a spare motor the team could put in for Friday and Saturday. But with a $15,000-to-win race at Fairbury Speedway coming up on Tuesday, Shirley will likely head home instead of risking any further setbacks. … Shirley’s fellow Illini, Frank Heckenast Jr., also might have seen his weekend end quickly. His car was pushed into the pits after his qualifying run due to terminal engine trouble; already changed into street clothes, Heckenast said he was unsure about installing a backup engine due to the amount of work (changing oil lines, etc.) that would be necessary.