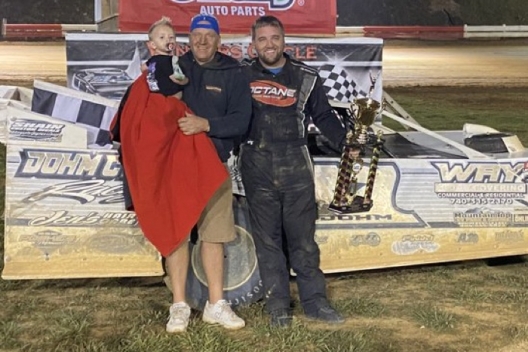 BECKLEY, W.Va. (Sept. 6) — Zack Dohm has been so dominant this year at Beckley Motorsports Park, even the driver he defeated to capture Sunday night’s Beckley USA 100 couldn’t hang his head over finishing second.

Dohm, 31, of Cross Lanes, W.Va., continued his 2020 mastery of his home-state track, securing his third special-event triumph — and richest yet — after rallying from a lap-37 pit stop to overtake Erb for the lead on lap 84 and then hold off the New Waverly, Texas, native’s furious late-race challenges. The checkered flag joined Dohm’s previous unsanctioned Beckley wins on July 4 ($10,000 Honor the Legends 60) and Aug. 8 (worth $7,500).

The 23-year-old Erb led the most circuits in the century grind, taking over on lap 35 when Chase Junghans of Manhattan, Kan., slowed with terminal mechanical trouble and remaining there until ceding the spot to Dohm on lap 84. But his multiple attempts to regain command from Dohm in the final laps fell short, leaving him as the race’s runner-up in his first-ever visit to the 3/8-mile oval.

Ryan Montgomery, 23, of Fairmont, W.Va., advanced from the seventh starting spot to finish third. Fifth-starter Henry Hornsby III of Beckley, W.Va., placed fourth at his hometown track and Tanner English of Benton, Ky., finished fifth after running second for much of the race’s first half and pitting to change a flat tire on lap 60.

Steven Roberts of Jesup, Ga., started from the pole position and led the race’s first four laps before he rammed into a slower car that was sitting spun in front of him in turn one, sending him to the rear and leaving him struggling to an eighth-place finish in a race that saw less than half its 21-car starting field still running when it ended at nearly 1 a.m. Junghans led laps 5-35 before mechanical failure eliminated the World of Outlaws Morton Buildings Late Model Series regular.

Dohm, who started eighth in his family-owned machine, was thankful that the flat tire he experienced while sitting inside the top five on lap 37 wasn’t very costly and he was able to save enough of his equipment to outduel Erb down the stretch.

“I knew me and Terbo (Erb) had the same tire on, and thank God he lapped up to about eighth when I had a flat,” said Dohm, who was able to restart inside the top 10 following his pit stop. “I came in, put a fresh left rear on, and I started picking ‘em back off.

“I got to second (behind Erb on a lap-52 restart) and I didn’t know if I’d be able to stay with him because he was running that top pretty good and I was, like, running the bottom of one and two and diamonding three and four. But we was just slowly-but-surely catching him. I was making a lot of ground up in one and two and just kind of hanging with him in three and four.

Running his customary inside lane, Dohm commenced pressuring the rim-riding Erb on the restart following English’s flat tire. Erb maintained a precarious edge until his momentum was stalled for a split second on lap 83 when he bobbled on the outside exiting turn two, allowing Dohm to pull alongside him on the backstretch and take the lead as lap 84 was scored.

“I was side-by-side with him there probably, I don’t know, it seemed like 20 laps in one and two, and then I’d tuck in line through three and four and down the frontstretch,” Dohm said. “I probably could’ve slid out in front of him in one and two a couple times, but I didn’t want to take a chance on wrecking us both or wadding a quarter-panel up and getting another flat. So I just slowly but surely was luckily able to get by him.”

A final caution flag on lap 90 erased Dohm’s building advantage over Erb and set up a decidedly difficult final sprint to the checkered flag for the Mountaineer State standout.

“The caution came out and my earbuds came out,” Dohm said. “That happened twice tonight — I don’t know what the hell happened — but it yanked ‘em out and man, it’s so much louder here, you can’t tell if you’re spinning (the wheels) or not.

“Before the yellow come out my brother (crew chief Nick) showed me, you know, ‘big lead,’ and after the last 10 laps he wasn’t really showing me that big of a lead so I figured some sliders would be coming (from Erb). And sure enough, he threw three of ‘em on me, but it was clean.”

Indeed, Erb turned up the wick after the lap-90 restart, charging the inside of turns three and four to slide in front of Dohm three times in the final circuits, including the last two laps. But on each attempt Erb’s Best Performance Motorsports XR1 Rocket car bounced as he slid up the track in turn four and Dohm calmly crossed him over to the inside to thwart the challenge.

"A couple people were like, ‘Man, can you believe he did them (sliders)?’” Dohm said of Erb. “I was like, ‘Yeah, it’s 15-thousand to win.’ I mean, he didn’t come all the way down here to run second, so I knew if he was close enough he would try it.

“We weren’t close to hitting or anything. Every time I seen him down there I could tell he was gonna run ‘er in there and slide up to the top, so we just crossed him over and went back on.”

Erb couldn’t pull off a victory in his Beckley debut, but the Lucas Oil Late Model Dirt Series regular didn’t go down without taking his best shot at the big prize.

“I fired off really good and I just tried to bide my time as much as I can,” Erb said. “When I got (to second) behind Chase (Junghans) I just tried to stay at his pace. I got the lead there (from Junghans) — I don’t know if he blew up or something, but he smoked there right as I got to him — and I wasn’t really sure if I wanted to lead or not, but I led most of the race.

“I knew Zack would probably be down there (running the bottom) at some point, and when he started showing me a nose I tried to go down there a couple times and whoa way up. I could kind of do it in three and four, but one and two I would just lose too much time.

“I think he was kind of protecting the top a little bit more too, so I was able to get close enough to him to slide him,” he continued. “I think I slid him with four to go, two to go and then the last lap, but I knew leaving the corner, unless he stopped or hit that hole bad, he would’ve drove back by me just because he was going down the hill and I was backing up the hill.”

Erb still wore a smile after settling for second place. Win or lose, he simply had a great time battling with Dohm.

“I mean, Zack, he’s tough around here, especially here. I’m not upset about it,” Erb related. “I want to win, that’s the goal, and I think the last 10 laps I showed that I drove as hard as I can drive … but Zack’s one of those guys, there’s a small list of people that run you really clean, and I try to do the same. I swear we were side-by-side for 40 laps and we barely hit one time on the front straightaway at a tiny place like this.

“I respect Zack and I think he respects me, and when you race like that and put on that much of a show, it’s hard to be upset about it.

“Second definitely does suck (though),” he added. “I’ve never won a hundred-lapper yet. I thought I was close. I think we’re taking steps in the right direction.”

Erb considered his invasion of Beckley as a successful trip.

“Hat’s off to Beckley,” Erb said. “That was a fun race. That’s what I told Zack before the race, I said, ‘Man, this place is awesome. With the lapped cars and everything that goes on, it’s like, up in the seat, really exciting.’

“This is the boost we all needed,” he added. “July was a really good month to us, and then August … we went to places that I don’t really like and weren’t running really good. We just went to the shop this week, built a (new) car, ran really good at Ponderosa (Speedway’s Lucas Oil event on Friday) and last night at Portsmouth (Raceway Park’s Lucas Oil show) I thought we had a really good car as well but blew up, so we got our car from last year out (for Beckley) and shoot, it never skipped a beat.”