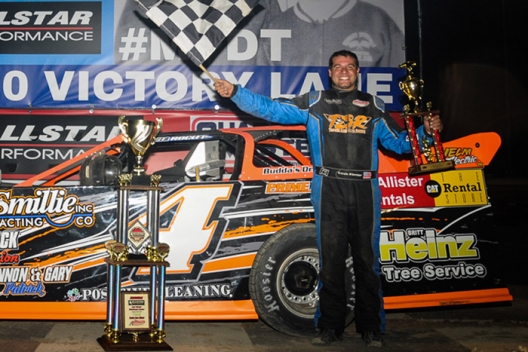 LAKE CITY, Mich. — Travis Stemler entered the 2020 season with not so much as a single $5,000 payday in Dirt Late Model competition. Why settle for that total if you can double it — twice.

The 29-year-old Dirt Late Model racer from Ionia, Mich., continued his best career season Sunday at Merritt Speedway with another $10,000 victory as he led the final 24 laps of the Allstar Performance Challenge feature.

Stemler, who also earned a $10,000 victory during Merritt's traditional Wood Tic one month earlier, started eighth and marched to the front at the 3/8-mile oval, overtook race-long leader Dave Baker of Grand Rapids, Mich., on lap 52 and cruised the rest of the way in his Anklam Racing entry.

With Baker shuffled back after the final restart on lap 68, David Mielke of Gladwin, Mich., finished second, but he was losing ground in the final laps in finishing 2.228 seconds behind Stemler at the checkers of an event that ended before 9 p.m.

Cody Bauer of Farwell, Mich., was third followed by ninth-starting Dona Marcoullier of Houghton Lake, Mich., the $4,000 winner in Saturday's miniseries action at Merritt. Baker, who led the first 51 laps.

Fast qualifier Rusty Schlenk of McClure, Ohio, who hounded Baker through the first half of the race, was running second when he began showing smoke and then retired after 41 laps.

At the outset of the 75-lapper, Baker got the jump on polesitter and fellow front-row starter Ryan Lanphierd while Stemler settled into the sixth spot for the first 20 laps.

Stemler moved by Bauer and into the top five before a lap-22 yellow, then took advantage of the restart to take the fourth position from David Hilliker.

Bauer fought back into the top five and, on a lap-32 restart, he took the fourth spot from Stemler, who ran fifth laps 33-37 before he jumped into third following a lap-37 restart. He'd get the second spot upon Schlenk's lap-41 departure and turned up the heat on baker following a lap-48 caution.

After Stemler took command on lap 52 with an inside pass exiting turn four, Baker couldn't get in position for a serious opportunity to regain the lead while Stemler cruised the rest of the way.

Notes: Stemler has seven victories overall in 2020 including a stretch of five in a row from late July to early August, culminating at Merritt's Wood Tic for his first five-figure score. ... Stemler's richest Late Model victory before 2020 came with a $4,000 Sunoco American Late Model Series triumph in 2019 at Gas City (Ind.) I-69 Speedway. ... Dona Marcouller's fourth-place finish snapped a two-race win streak. Along with Saturday's $4,000 victory at Merritt, he earned a $5,000 payday Friday at Tri-County Motor Speedway in Auburn, Mich., also in Allstar Performance Challenge action. ... Merritt's Sunday polesitter Ryan Lanphierd got a poor start, was never a factor and retired on lap 55. ... Seven cautions slowed the action with the first 15 laps the longest stretch of green-flag racing. .... Fifteen drivers completed 75 laps. ... Dan Hersey scratched from the main event.