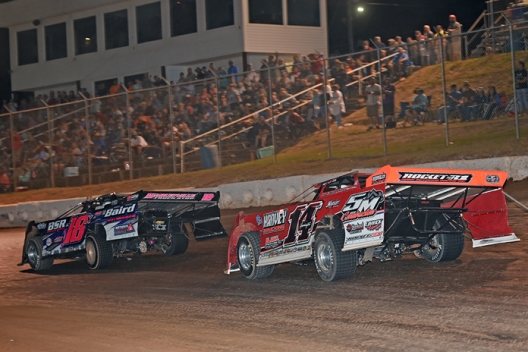 COCHRAN, Ga. (Sept. 6) — With $20,000 on the line, Michael Page turned to a trusted machine at Cochran Motor Speedway and used it to perfection.

Driving a more than 15-year-old MasterSbilt Race Car that he reserves mostly for Crate Late Model competition, Page of of Douglasville, Ga., took the lead from second-starting Zach Sise of Knoxville, Tenn., on lap 14 of Sunday's 75-lap Chevrolet Performance World Championship feature at Cochran Motor Speedway and later turned back challenges from Wil Herrigton of Hawkinsville, Ga., to score a career-high $20,000 victory in the Crate Racin’ USA-sanctioned event.

Page crossed the finish line 0.349 seconds ahead of the fifth-starting Herrington in earning his third special event victory of the season and his first since early May.

“I’ve raced for a long time and this is the most we’ve ever won with the oldest car that I’ve ever had and the worse car that I’ve ever had. But for what it is, man, it’s fun to drive,” Page said of his No. 18x machine. “It’s old and it’s raggedy. If you look under it, it’ll scare you, but you get in it and you feel like you’re in the best thing they make.”

The fifth-starting Herrington settled for second with Randy Weaver of Crossville, Tenn., just behind him in third. Three-time event winner Kyle Bronson of Brandon, Fla., rallied from 17th to finish fourth after arriving at Cochran on Sunday and rallying from the tail of a consolation race to earn a feature starting spot. Dylan Knowles of Lanett, Ala., rounded out the race’s top five finishers.

After settling into second from his pole starting spot, Page followed second-starting Sise through the race’s opening laps before turning up the pressure when the leaders caught traffic just after lap 10. Page took advantage of Sise’s misstep in traffic to draw evening for the lead down the back straightaway on lap 14 and pulled ahead one lap later.

"Sometimes it's worse to be leading," Page said of his move on Sise in traffic. "He didn't really know where to go and I was just going where he didn’t seeing if I could find something. I kind of found that groove on the bottom.”

Indeed, Page found the track’s dominant bottom line during his battle with Size, and he never left it for the remainder of the race. Even as slower traffic blocked his way, Page patiently rode behind the each slower car until a lane on the bottom opened up wide enough for him to move by.

That move proved crucial, as any time a driver tried to look to the high side of Page, he ended up shuffled back in the line. Herrington did that early in the race, dropping back to fourth after looking to step outside of Page on lap 41.

That gave the second spot to Mark Whitener of Middleburg, Fla., who made nearly the exact same mistake as Herrington when he attempted to make a high-side pass on Page on lap 47. Instead of moving to the lead, Whitener was quickly dropped to sixth.

While Whitener was never again a factor after his high-side miscue, Herrington was able to recover from his and moved back to second on lap 66. He closed in on Page as the race entered its closing stages, but cautions on laps 69 and 71 gave Page clear track ahead of him.

“I knew (Herrington) was sneaking around there,” Page said. “I knew I better not mess up or he was going to get me. Good job to him and Randy. Wil’s gonna be really good. I’m proud for him.”

Racing at his home track, Herrington fell just short of the win, but he pulled ahead in the tour’s championship battle after entering the event tied atop the standings with Cruz Skinner of  Oxford, Ala., who was ninth in Sunday’s rundown.

“I wanted to win as much as anybody, but I had to keep in the back of my mind that we was points racing too,” Herrington said. “The race car got good there at the end and he kind of came back to me. But he’s so good, he was really gonna have to mess up. I didn’t want to see that caution at all.”

Weaver took a turn in the second position as well, holding the spot from lap 47 though 65, but he was never strong enough to make a serious challenge on Page.

“I hadn’t ever been here in a Crate car and I ran a Super car here probably 10 years ago when it was kind of a different configuration,” Weaver said. “It was a good night. We started 10th and drove up through there and I was pretty good middle part of the race. We had a caution and got jumbled up there.”

The race was slowed by four cautions with the first appearing with 28 laps complete when T.J. Brittain of Rome, Gaa., slowed in turn two. The yellow waved again before another lap was completed when fifth-running Sise got turned around on the back straightaway after contact with Weaver. Sise’s spin sent the field scrambling, but everyone was able to avoid him.

The third caution came with six laps remaining when Kelly Walker of Moultrie, Ga., slowed in turn three. The fourth and final caution waved two laps later for Mark Whitener of Middleburg, Fla., who ran as high as second midway through the race before fading back.

Notes: The victory ended a four-month slump for Page and helped boost a slight disappointing 2020 season. With just three victories now, he's well behind the pace of his 11-win season in 2019. ... Page's previous victory was a $5,000 unsanctioned Super Late Model win at Senoia (Ga.) Raceway on May 7. ... Bronson missed Saturday's prelims in order to compete with the Lucas Oil Late Model Dirt Series at Ponderosa Speedway in Junction City, Ky., on Friday, where he finished 10th and Portsmouth Raceway Park on Saturday where he finished sixth. ... Joseph Joiner of Milton, Fla., recovered from a blown engine that forced him to miss Saturday's prelims to make the main event after also starting from the tail of a consolation race on Sunday. He advanced to sixth in the consy before charging from eighth to win the last chance race.