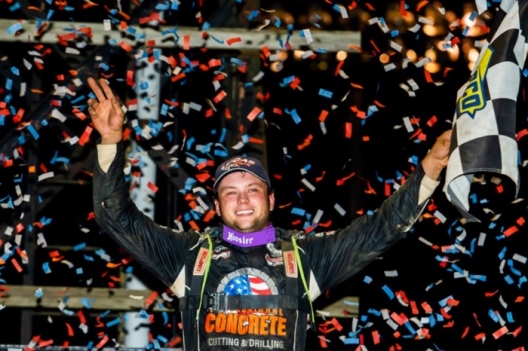 Indeed, turning 20 on Saturday was a joyous occasion for the talented young racer from Martinsville, Ind., who celebrated his life milestone in style — with a slump-busting victory in the Lucas Oil Late Model Dirt Series-sanctioned Bob Miller Memorial River Days Rumble presented by Pepsi at Portsmouth Raceway Park.

Returning to the national tour’s spotlight for the first time in nearly a year, O’Neal came on late in the caution-plagued 50-lap feature to pass race-long pacesetter Jimmy Owens of Newport, Tenn., for the lead on lap 37 and march on to the $12,000 top prize. The Hoosier beat Owens to the finish line by 0.930 of a second to register his first Lucas Oil Series triumph since Sept. 21, 2019, in the Jackson 100 at Brownstown (Ind.) Speedway.

O’Neal’s seventh career Lucas Oil Series checkered flag was his first that didn’t come in an SSI Motorsports car fielded by Todd Burns. O’Neal departed that ride last fall and then struggled to find speed this season with the reformed MasterSbilt house car team, leading to a split after July 18’s Show-Me 100 and his debut less than a month later with Hope, Ind.-based PCC Motorsports owned by Craig and Shannon Sims, the parents of O’Neal’s girlfriend Tessa.

Breaking through to reach victory lane in just his seventh start with his newly-formed effort was no doubt a relief for O’Neal, who managed just a single top-five finish in his 29 starts with the MasterSbilt house car team.

“I can’t thank Craig and Shannon Sims, my girlfriend Tessa and (fellow racer-turned-crewman) Dustin Nobbe enough for their help,” said O’Neal, who dropped off the Lucas Oil circuit after his run in the MasterSbilt mount ended in July. “This has been a long seven or eight months. I didn’t think I was ever going to do it again.”

O’Neal showed immediate speed when he returned to action last month in the Simses’ Cornett-powered XR1 Rocket, finishing fifth in Aug. 12’s Lucas Oil Series feature at Florence Speedway in Union, Ky. — tying his season-best run — and ending the meet at the half-mile oval with a seventh-place result in the North-South 100. He was a contender again in the tour’s Aug. 27-29 Rumble by the River weekend at Port Royal (Pa.) Speedway, though his finishes of sixth and 14th didn’t entirely reflect his strength.

Portsmouth brought back the driver who not so long ago appeared to be on the fast track to stardom in Dirt Late Model racing. Starting from the eighth spot, O’Neal moved into the top five by the race’s halfway mark, inherited second place when Tim McCreadie of Watertown, N.Y., tossed a rear wheel on lap 33 and then turned up the pressure on Owens.

O’Neal made his move on lap 37, diving underneath Owens — the runaway Lucas Oil Series points leader and 10-time winner on the tour this season — through turns three and four to assume command. He never looked back, pulling away to lead by as much as 2 seconds before caution flags on laps 47 and 49 kept his final winning margin over the 48-year-old Owens to under a second.

“That one late restart helped me,” O’Neal said of the green flag that followed McCreadie’s demise. “I was able to capitalize. I don’t think I had the best race car, but I just think I found a line that worked for me.”

The late-race surge carried O’Neal to victory on his birthday for the second consecutive year. He celebrated his 19th birthday a year ago by capturing a World 100 preliminary feature at Eldora Speedway in Rossburg, Ohio.

Owens didn’t hang his head after falling short of yet another checkered flag.

“The cautions were good for us for a while,” said Owens, who started from the outside pole and outgunned front-row mate Jonathan Davenport of Blairsville, Ga., for the lead at the initial green flag. “The top side was getting higher and higher. There was a lot of thrashing the cushion up there tonight; there were people knocking quarter-panels off, (and) I was waiting for one of mine to get knocked off.

“Hudson just had a good car tonight,” he added. “Congratulations and happy birthday to him.”

English, 27, wore a satisfied smile after advancing 12 positions to garner by far his best finish of his first full Lucas Oil campaign driving for Riggs Motorsports. His best previous finish this season was seventh, on July 4 at Muskingum County Speedway in Zanesville, Ohio, and July 13 at 300 Raceway in Farley, Iowa.

“(O’Neal) got up to the top pretty quickly,” said English, who leads the tour’s Rookie of the Year standings. “I was racing with him side-by-side and the next thing I knew he was out in front. He had a good car. Congratulations to him. It’s been a long year for him so it’s good see him get a win.

“It’s been a long year for us as well. We have been up-and-down and all around and we finally got a good result tonight.”

Ten caution flags slowed the race, which took more than 50 minutes to complete. There were no serious accidents, but the lap-32 caution period was an extended one because officials were unable to immediately go back racing due to a medical situation with a fan in the stands.

• Tyler Erb of New Waverly, Texas, slowed on lap nine and retired after his crew looked under the Best Performance Motorsports car’s hood.

• Josh Richards of Shinnston, W.Va., was running fourth on lap 22 when he shredded a right-rear tire. He pitted and rallied to finish eighth.

• Steve Casebolt of Richmond, Ind., charged from 18th to fifth before his bid to slide by Clanton for fourth on lap 25 resulted in him smacking the turn-four wall, ending his night.

• Devin Moran of Dresden, Ohio, was running second on lap 32 when a blown left-rear tire caused him to fall off the pace. He settled for a 15th-place finish after developing another flat tire on lap 47.

• McCreadie relinquished second on lap 33 when his Paylor Motorsports car lost a wheel in turn three.

Other caution flags were caused by Brandon Fouts (lost a wheel on the first lap); debris (lap 11); and Billy Moyer Jr. (mud-packed wheel on lap 14 and a right-rear flat on lap 49.