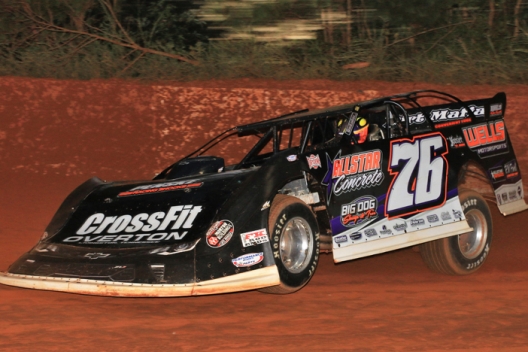 Defending his home Southeast turf in dominating fashion, Overton grabbed the lead from race-long pacesetter Johnny Pursley of Clover, S.C., on lap 12 and ran away from the pack over the remaining distance to easily capture the $10,000 top prize in the half-mile oval’s 50-lap World of Outlaws Morton Buildings Late Model Series feature.

It was yet another superb performance in a season filled with them for the 29-year-old Overton, who cruised away from Ricky Weiss of Headingley, Manitoba, following the race’s three restarts en route to beating the Canadian by a commanding margin of 3.012 seconds.

“Man, I’ll tell you what, we got a helluva hot rod right now,” a smiling Overton said in victory lane after climbing out of his David Wells-owned Longhorn Race Car. “This thing’s a joy to drive and just everything’s going perfect.

“My crew, everybody’s getting along good. My car owners … it’s been a cool last couple months and I hope it don’t end.”

Overton was victorious in his fourth consecutive WoO start, extending his personal win streak that includes a sweep of the national tour’s Aug. 6 and 8 events at Cedar Lake Speedway in New Richmond, Wis., and a $10,000 triumph Friday night at Lavonia (Ga.) Speedway. He has 19 overall victories in his first full season driving equipment fielded by Wells.

Weiss, 31, secured second place behind Overton on lap 18 but never offered even cursory pressure to the fleet Overton, who cruised to his 11th career WoO win. Ross Bailes of Clover, S.C., finished third in the Big Frog Motorsports No. 58, runaway WoO points leader Brandon Sheppard of New Berlin, Ill., came on late to place fourth after running outside the top five for most of the distance and Dennis Erb Jr. of Carpentersville, Ill., was fifth for his third straight WoO top-five run.

Pursley faded steadily after starting from the pole position and leading the race’s, finishing 14th.

Overton admitted during an interview in victory lane that “it kind of spoils you when you start winning a little bit” like he has this season — to the point, in fact, that “when you run bad, it makes you so mad.”

But there’s no denying that Overton is performing on a higher level than most of his competition. He intimated that he might have stepped up his game even more during his sweep of the two-race WoO weekend in the Southeast.

“This is a new engine package we got in this thing, and I ain’t so sure it ain’t better than what we had,” said Overton, setting off warning bells among his rivals. “So hat’s off to (engine builder) Glenn (Clements) and all his guys.

“We just got our head down right now digging and it’s showing off.”

Overton built an edge of as much as a straightaway over his closest pursuer once in command. Even a final caution flag, on lap 46, didn’t prevent him from flashing under the checkered flag comfortably ahead of Weiss, who was resigned to his first runner-up WoO finish since May 23 at Jackson (Minn.) Motorplex.

“Brandon’s pretty good night in, night out,” said Weiss, who started on the outside pole in his Bloomquist Race Car. “We’ve been working on our stuff and this (a big, fast southern track) isn’t really my forte I would say, so to run second and to gain in the points like we did tonight, that’s like three wins to me. I was happy to be able to run second to him.

“I like big tracks, it’s just when it gets dirty like that, that seems to be where we struggle a little bit. We’ve made leaps and gains on that (though). We’ve really been working hard on this thing and tweaking a lot.”

The outing gave Weiss a significant boost in his battle for second in the WoO points standings with Cade Dillard of Robeline, La., who brought out the race’s first caution flag on lap 22 and then retired with terminal mechanical trouble. Weiss expanded his gap on Dillard from 44 to 78 points with eight races remaining on the 2020 schedule.

Bailes, 30, started fourth and ran inside the top five throughout the feature, but he felt the lap-22 caution flag for Dillard hampered his hopes contending for the win.

“We were really good there at the start,” Bailes said. “We got that long green flag run (the race’s first 22 circuits) and I could really feel my car starting to come in. Then we had that caution and I don’t know if my tires cooled down or what, but it was just like it didn’t fire the same after that. It’d take me five or 10 laps to get going.

“I was hoping I could get up there and win this thing so I could give these fans something to really cheer about.”

The A-main’s other caution flags were triggered by Ricky Weeks of Rutherfordton, N.C., who slowed on lap 34 with right-rear bodywork damage, and WoO regular Darrell Lanigan of Union, Ky., whose Barry Wright Race Car house car was felled by a flat left-rear tire on lap 46 after he had fallen out of the top five.