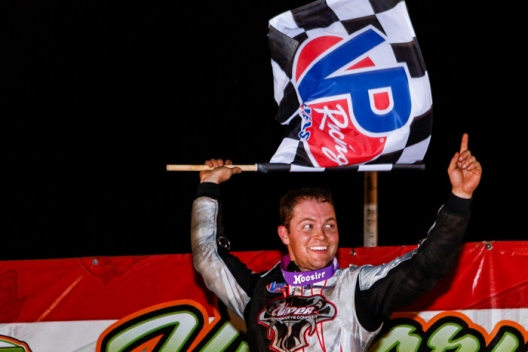 FAIRBURY, Ill. — Fairbury Speedway hasn't been Bobby Pierce's luckiest track, but with a few phone calls back home for tech help and a little throttle-stomping, things turned out just fine for the 23-year-old Oakwood, Ill., driver on Saturday.

The pole-starting Pierce led all 50 laps at the quarter-mile oval, surviving a few bouts with lapped traffic and a restart with 14 laps remaining for a $10,000 FALS Super Nationals victory. The win was his second in three nights of action on the MARS Racing Series as he picked up $5,000 Thursday at Farmer City (Ill.) Raceway.

“The car was really good tonight," said Pierce, whose father and chassis builder Bob Pierce wasn't at the track because of a one-month suspension from DIRTcar-sanctioned events. "I kind of faded there at the end. I think I was a little hard on the tires there at the beginning, but the car was really good. Big thanks to my dad, him being on the phone, helping me out.”

Scott James of Bright, Ind., the previous Saturday's winner at Fairbury, was running third on lap 36 when he got into an infield tire barrier to end his race, drawing the event's lone caution.

Pierce jumped out to a comfortable lead early, leaving fellow front-row starter Billy Moyer in his dust and building a lead of more than three seconds by the halfway mark as Heckenast, who took second from Moyer on the ninth lap, gave chase.

Pierce had a cushion of four lapped cars midway through the event, but when he faced a flurry of slower cars several laps later, Heckenast and his pursuers cut his lead down to just over one second. Hung up lapping cars, Pierce finally slid under Mike Spatola to get some breathing room before the caution for James.

“I didn’t really want the caution, because I just found a rhythm two laps before the caution hit. But if the caution (would’ve appeared) two laps before that, I probably would’ve have been as good on the restart," Pierce said "Because I just found a rhythm and I started doing my typical line in (turns) one and two like I did early. (Turns) three and four I kind of figured that out a little bit better and, with my tires going away there — like I said I think I was a little too hard on ’em — I was pretty nervous there at the end when that caution came out.

“This place normally has a plague on me for bad luck, but a lot of good luck charms here tonight, so big thanks to everybody.”

Notes: Pierce has 11 career MARS victories including three this season. ... He has seven victories overall in 2020. .. Ten drivers completed 50 laps. ... Shannon Babb, who switched to a backup car after hot laps, was among early retirees. ... No more MARS races are currently scheduled.