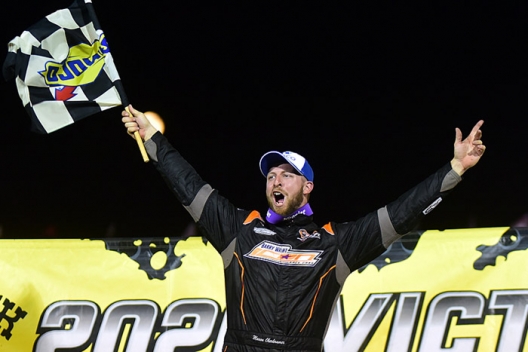 The Broseley, Mo., driver took the lead with 11 laps remaining and then held on in sprint to the finish after a restart with two laps remaining.

"Man, it's been a long time coming for one of these," Oberkramer said. "I've been chasing this track for five years now. Gremlins get me every time. I'm so happy to finally land one."

The high side was the path to victory for Oberkramer, who made an outside pass of Justin Duty coming out of turn four on lap 29. Duty, who led the first 28 circuits, finished second with Chad Simpson third and MLRA points leader Payton Looney in fourth.

Oberkramer said some early contact damaged some sheet metal early in the race and his car became tough to drive, but came roaring to life over the final dozen or so laps.

"I have to thank my parents, my whole family, my friends who help at the shop and (teammate) Tony Jackson and his whole family," Oberkramer said. "Everything was just clicking tonight."

Duty started outside of row one and he got the jump as the race went green, and had up a 1.4-second lead over Oberkramer when caution for debris flew on lap 13. Simpson was running third, Aaron Marrant fourth and Looney fifth.

The top three battled it out as the race continued for a lengthy run of green-flag laps, until Oberkramer sailed around the outside of Duty to take the lead coming out of turn four to complete lap 29.

The high side of the track was fast — but treacherous — throughout the 40-lapper with little margin for error.

"Live or die, you know how that is," Oberkramer said of the high groove. "There was a thin line that'll make or break you. Dad was signaling me to the top and that's what I did. I had to get up there and get it done."

Oberkramer had a one-second lead as Duty and Simpson gave chase when a caution for Stovall's spin on lap 38 created drama. That set up the three leaders, fourth-running Looney, for a frantic two-lap shootout.

Oberkramer flawlessly handled the restart and went on to beat Duty by 0.593 seconds. Duty, of Happy Valley, Oregon, ran second for the second straight time in MLRA action.

"I didn't quite adjust enough," Duty said. "I should have just stayed up top and pounded away. I wasn't sure how long our tire was gonna last, but we had a real good car all night long, start to finish. Overall, I'm happy with second. Mason had a good car and we'll take second."

Simpson, who began the night 120 points behind Looney, called it a solid night overall.

"The racetrack was really fast tonight and I knew I needed to be up top and I couldn't steer as good as Mason could up there," Simpson said. "He was rolling good on top and got there quicker than I did.

"Mason dropped to the bottom a couple of times and made a lot of hay there, too. He probably had the better race car tonight. We'll work on our stuff and try to get better for tomorrow."

Marrant, a former Lucas Oil Speedway ULMA Late Model track champion, picked up the $500 Slick Mist fast-time award with a qualifying lap of 15.227 seconds. He started fourth in the feature and finished fifth.