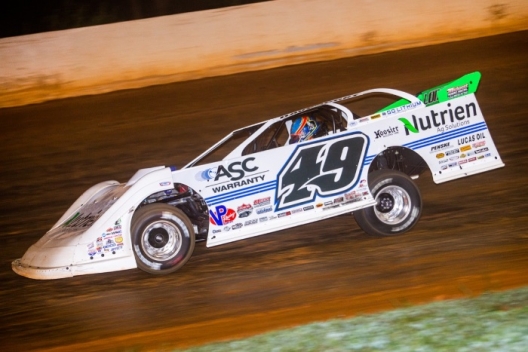 The three-time and reigning series champion fought off mid-race challenges by series points leader Jimmy Owens of Newport, Tenn., and ended up taking the checkers 1.383 seconds ahead of runner-up Billy Moyer Jr. of Batesville, Ark. Seventh-starting Mike Marlar of Winfield, Tenn., was third with Zack Dohm of Cross Lanes, W.Va., and 12th-starting Tim McCreadie of Watertown, N.Y., rounding out the top five.

Owens, who started outside the front row and held the second spot for 33 laps, was shuffled back to sixth after a restart with 12 laps remaining and ended up seventh after losing his final spot to Tyler Erb on the last lap.

"Man, it's been a struggle here for sure. We have had some really good years," Davenport said in victory lane. "We just try to not let the lows get too low. I've got to give this win to my guys. They have been working their tails off. Man, I cherish these wins. I didn't know when I was going to get another one."

The second-finishing Moyer added another podium finish in chasing Davenport to the checkers.

"I know I say it all the time, but those guys are great to work with," Moyer said, thanking Capital's Marshall Green. "We made some changes after hot laps and it turned our night around. So all in all in turned out to be a good night."

Improving four positions, Marlar turned in a podium finish at a track where he's competed frequently throughout his career.

"I was trying to put on a show for the fans. I was really wanting to win one so close to my home," he said. "The track was awesome out there tonight, we could move around a little bit. I needed a few more things to go my way on the restarts, but we had a good car at the end for sure."

The feature was slowed by three cautions, the first when tail-running Stormy Scott stopped and retired on lap 14 and again on lap 38 when Dustin Linville slowed. The last yellow appeared on lap 46 when Earl Pearson Jr. spun in turn two (Shane Clanton ducked into the pits with a flat tire during the ensuing caution).

The national tour’s Labor Day weekend continues Saturday with a $12,000-to win event at Portsmouth (Ohio) Raceway Park. Sunday’s Hillbilly 100 at Tyler County Speedway in Middlebourne, W.Va., was removed from the schedule when the Carl Short-promoted event was cancelled because of coronavirus restrictions.

Notes: Davenport scored his 49th career series victory, third on the all-time list. … Nineteen drivers finished on the lead lap. … Billy Moyer Jr. posted his second runner-up finished of the season; he was also second July 17 at Tri-City Speedway in Granite City, Ill. … Justin Rattliff of Campbellsville, Ky., debuted a new Longhorn Chassis by Wells but failed to make the feature lineup. … Home-state driver David Webb of Nicholasville was fastest in his qualifying group and started sixth in the feature. He ran fourth the first 14 laps but fell from contention and eventually retired on lap 42. … The John Bradshaw Memorial honors a former track promoter.