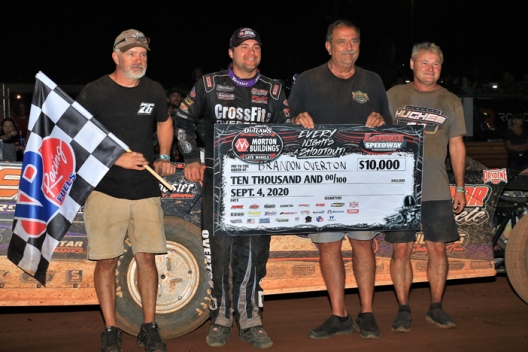 In a race that saw New Berlin, Ill.’s Sheppard finish one lap down in 18th after he spun out of third place and collected several other cars on lap 25, Overton advanced from the sixth starting spot — directly outside Sheppard — to grab the lead from race-long pacesetter Zack Mitchell of Enoree, S.C., on lap 18. He later lost the top spot to Erb on lap 43 but regained it the following circuit and held on the remainder of the distance to beat the Midwesterner by 0.320 of a second.

Chase Junghans of Manhattan, Kan., finished third, matching his best outing of the 2020 WoO campaign. Ricky Weiss of Headingley, Manitoba, placed fourth after starting third and falling back as far as seventh and Mitchell, the outside polesitter and leader of laps 1-17, completed the top five as his bid to repeat his first career WoO win in June 22’s tour stop at Volunteer Speedway in Bulls Gap, Tenn., came up short.

Overton was a tired but happy racer upon reaching victory lane at his home-state oval.

“Hell, they made me work for that one, that’s for sure,” Overton said, shaking his head after his third WoO triumph of the season and the 10th of his career. “I had to race way too hard, way early, but you never know what could’ve happened. I seen Sheppard got in a wreck up there, and you want to get out of all that as fast as you can, especially at little tight places like this.”

Starting side-by-side with Sheppard, 27, after the division’s 2020 standouts turned the two quickest laps in qualifying, Overton went to work as soon the race’s green flag was displayed in an effort to reach the front before B-Shepp. He did that with aplomb — after Overton overtook Erb and Mitchell on the same circuit to assume command, Sheppard was still fourth — but he never was able to set his David Wells-owned Longhorn Race Car on cruise control the rest of the way.

After the feature was red-flagged on lap 25 for the incident involving Sheppard, the race ran uninterrupted to the finish. Overton was dogged closely throughout the second half by the 47-year-old Erb, who turned up the pressure in search of his second consecutive WoO victory once Overton reached lapped traffic with just over 10 laps remaining.

“My crew guy, he probably wanted to throw them (signal) sticks at me,” Overton said. “He was going, ‘Now get down! Get down!’ But I couldn’t … I mean, I could, but I would’ve felt so bad if somebody drove around me on the top.

“I know Dennis was down there (on the inside), and then one time he about run (past) me on the outside so I didn’t want to be down there protecting. You don’t know … it’s a crapshoot. I stayed up there longer because I said, ‘Well, I’m just riding around up here right now, let me see if I can get after it.’ Then I seen (Erb) and I spun the tires leaving (turn) two down there (on lap 42) and I was like, ‘Oh, hell.’”

Erb, who started from the pole position, managed to sneak past Overton off turn four to lead lap 43. Overton immediately retaliated, though, tossing his machine around the outside of turns one and two to surge ahead on the backstretch and move back ahead as lap 44 was scored.

While Erb remained close and nearly drew his XR1 Rocket car up to Overton’s rear bumper exiting turn two on the final lap, the WoO regular had to settle for second.

“We had a good run,” said Erb, who was victorious in the last WoO event contest, on Aug. 22 at Eriez Speedway in Hammett, Pa. “I was able to get around (Overton) there on the outside, found a good lane through the middle. But then he got back up there and lapped cars got in the way and kind of played an effect there.

“But we had a good car and were right there racing for the lead with one of the best out there now, so finishing second’s pretty good.”

“This is a dream come true for me,” said Overton, who registered his 18th overall triumph of 2020. “Big Dave and Eric (Wells), they do everything I need, so I can’t stress how important that is to me. I really appreciate ‘em.”

David Wells was in attendance at Lavonia and hailed his driver after the race.

“I’ll tell you what, that boy there, he can wheel a race car,” Wells said. “Unbelievable … he just keeps impressing me every day. I just feel very fortunate to be a part of what he’s doing.”

The race was slowed by three caution flags: on lap 12 for Blake Spencer’s spin in turn four; lap 13 for Chris Madden stopping at the turn-four exit gate to the outer pits; and lap 25 for debris.

A red flag was displayed on the lap-25 restart for the A-main’s most significant incident. Sheppard tossed his Rocket Chassis house car to the outside in a bid to overtake Erb and challenge Overton when he bounced through the cushion in turn two and lost control, causing him to slide sideways and collect Chris Ferguson, Darrell Lanigan and Ashton Winger. Lanigan, who was running 12th, made the hardest contact, sending the nose of Sheppard’s backwards car off the ground for a moment.

Sheppard’s No. 1 was towed back to the pit area, but he returned after his crew made hasty repairs. The runaway WoO points leader struggled for the remainder of the distance, going a lap down to Overton on lap 42.

Winger also continued after pitting and finished 13th while Ferguson and Lanigan retired from further action.

Notes: Overton was victorious in his third consecutive WoO appearance; his two previous wins came in the tour’s Aug. 6 and 8 events at Cedar Lake Speedway in New Richmond, Wis. … Junghans logged just his second podium finish of the 2020 WoO season, duplicating his third-place effort on July 11 at Plymouth (Wis.) Dirt Track. “I was pretty good towards the end,” said Junghans, who noted that he barely escaped the lap-25 tangle triggered by Sheppard. “When those (lead) guys were messing with the lappers and stuff I kind of caught back up to ‘em. It was just really hard to get out of the lane and try to pass those guys.” … Chris Madden of Gray Court, S.C., who won last year’s visit to the Georgia oval, made hard contact with the turn-three wall in hot laps that left the right side of his car severely damaged. His Rum Runner Racing crew patched up the machine and he qualified through a B-main but was the feature’s first retiree. … Making his debut behind the wheel of Billy Hicks’s Mount Airy, N.C.-based H&H Auto Sales No. 79, Ben Watkins of Rock Hill, S.C., finished 16th. … The WoO tour, which visited the 3/8-mile Lavonia oval for the fourth time in series history, moves on to Lancaster (S.C.) Speedway on Saturday to complete its Labor Day weekend action.