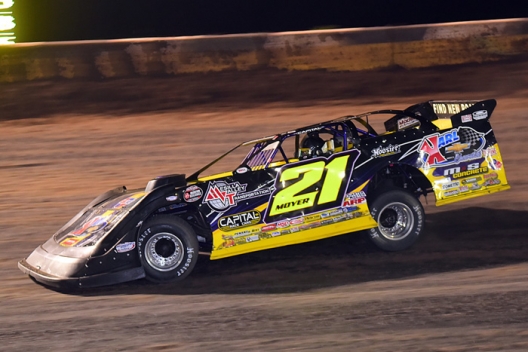 Moyer turned back an early challenge from Ashton Winger and survived a late-charging Brian Shirley to emerge victorious. Shirley finished 0.485 of a second behind Moyer to secure the outside pole for the 100-lapper.

Kyle Bronson briefly slid to second place by Winger on lap four but fell to fourth by the end of the circuit. The Floridian rallied to finish third.

Racing largely unchallenged from start-to-finish, Kyle Strickler was victorious in the 12-lap Fans Fund Dash reserved for drivers who accepted invitations to participate in the USA Nationals through the program that raises travel money through fan and sponsor donations.

Strickler earned $2,500 for his triumph over Rick Eckert, who finished 0.762 of a second behind in second. Ross Bailes placed third, followed by Chris Simpson and Jason Feger.

Kyle Strickler executed a slider through turns three and four with two laps remaining to grab the lead from Darrell Lanigan en route to winning the second heat. … Jimmy Owens gained six spots to place third in Heat 1 while Brandon Overton picked up four spots in claiming a fifth-place finish in Heat 2. … Switching to his younger brother Trevor’s car, Gordy Gundaker returned to competition after his Round 1 flip but finished last in the second heat. … A red flag was thrown for a wild crash on lap two of the third heat that left Chase Junghans, Nick Anvelink and Reid Millard sitting in turn one and also marginally involved three other cars, including Billy Moyer. Millard climbed out but rode back to the pits in the ambulance while Junghans’s car sustained the heaviest damage. … Tyler Erb secured a runner-up finish in the third heat after swapping the second spot with Ross Bailes several times in the closing circuits. … The fourth heat ended with Kyle Bronson sliding leader Jimmy Mars in turn two, Mars ducking low off the corner to regain command and then Bronson pulled another aggressive slider through turns three and four. The two drivers rubbed together down the straightaway with Bronson winning by 0.050 of a second; afterward they traded pleasantries on the cool-down lap and Bronson told Mars’s home-state crowd, “That’s for all you Jimmy Mars fans.” … Dennis Erb Jr.’s mechanical failure with two laps to go in the fifth heat set up a spectacular finish. Jason Rauen shot by Dustin Sorenson for the lead on the restart and then flashed under the checkered three-wide to defeat Rick Eckert by 0.088 of a second and Sorenson by 0.161 of a second; Sorenson spun to a stop in turn one after settling for third place.

Heat 3 runner-up Tyler Erb emerged as the leader in the passing points standings after the first round of qualifying, accumulating 108 points to top Stormy Scott (105), Jason Rauen (104), Billy Moyer (100), Dennis Erb Jr. (100), Jimmy Owens (100), Brandon Overton (100), Chris Simpson (98), Allen Murray (98) and Chase Junghans (98). … After apparently breaking a driveshaft, Jeff Massingill slammed the outside wall between turns three and four on the opening lap of Heat 2 and collected Shannon Babb. Massingill’s car was towed off while Babb limped to the pit area with significant right side and nosepiece damage to his XR1 Rocket car. … Gordy Gundaker escaped injury following a Heat 3 crash that saw him bounce in turn three, absorb a hit from Tyler Erb and flip into the outside wall before landing upside down. “I’m pretty sure somebody ran into me,” Gundaker told pit reporter Ruben Mireles while also asking, “Who was it?” After walking back to the pit area, Gundaker came back on the track during the red flag and found Tyler Erb sitting between turns one and two to chat about the incident. … WoO points leader Brandon Sheppard struggled to pick up two spots for a fifth-place finish in Heat 3, leaving him 22nd in passing points after Round 1. His run included a lap-five scrape with Nick Anvelink that sent the Wisconsin driving spinning in turn two and a lap-eight near-collision with Brent Larson in turn four that cost him fourth place to Jason Rauen. … Thursday-night feature winner Brandon Overton was the most convincing heat victor, running away with the fifth prelim off the pole position.

Temperatures have hovered in the upper 70s for most of Friday under cloudy skies with a few brief spells of light rain falling. The Cedar Lake area is under a severe thunderstorm watch and some dark clouds were visible as race time approached, but forecasts show the chance of precipitation rising to over 50 percent only after midnight. … Forty-five cars are entered in Friday’s double-heat qualifying program — the exact same turnout for last year’s USA Nationals preliminary show. … The only driver who competed in Thursday’s World of Outlaws event but isn’t entered tonight: A.J. Diemel of Elk Mound, Wis., who attempted to qualify his WISSOTA-motor car but fell short. He’s focusing on running the machine in the Cedar Lake Late Model action on Friday and Saturday. … WoO points leader and 2018 USA Nationals champion Brandon Sheppard of New Berlin, Ill., experienced brake trouble in Thursday’s 30-lap feature — the fluid leaked out and left him without brakes just a couple circuits into the race — and struggled to a ninth-place finish. Following his sixth-place run in Tuesday’s WoO stop at Beaver Dam (Wis.) Raceway, Sheppard has gone back-to-back starts without a top-five finish for just the third time this season. … The top eight drivers in Friday’s passing points will run an 8-lap dash to determine the lineup for the first four rows of Saturday’s 100-lap finale. How important does USA Nationals history say it is for a driver to run the dash? No winner of the $50,000 crown jewel event has started worse than sixth since Scott Bloomquist of Mooresburg, Tenn., came from 19th to capture the 2010 edition. … Bloomquist, who advanced from the 24th starting spot to finish 10th in Thursday’s A-main, is running the same car from his team’s stable that Chris Madden of Gray Court, S.C., piloted to victory in last year’s USA Nationals headliner. … Ryan Gustin of Marshalltown, Iowa, and his Tri-Star Engines and Transmissions team made repairs to their XR1 Rocket car that was sidelined when Gustin was sent spinning from contact with Tyler Erb of New Waverly, Texas, and was hit by Jason Papich of Nipomo, Calif., on the opening lap of Thursday’s fourth heat. Gustin’s comment immediately after the incident was certainly unique: “Race with squirrels, you get your nuts cracked,” he said before later asserting that he’s “not a Tyler Erb fan right now.” … It was announced during Friday’s drivers’ meeting that Saturday’s 100-lap feature will for the second straight year have double-file restarts for the entire distance per a decision by track management. WoO features normally go to single-file restarts with 10 laps remaining, but the USA Nationals isn’t contested under the standard WoO format and, as a result, awards only show-up points to entrants.

The 33rd annual USA Nationals weekend continues on Friday night at Cedar Lake Speedway with a World of Outlaws Morton Buildings Late Model Series-sanctioned qualifying program featuring a double-heat format for the third consecutive year. With time trials scrapped, a draw will set the heat-race lineups and passing points will be tallied to determine the transfers to Saturday night’s 100-lap, $50,000-to-win finale.

The top 16 drivers in passing points following the events will lock into the 100-lapper; the top eight in the points will also line up in that order for an 8-lap dash this evening with the finish of the race setting the first four rows of the USA Nationals.

Friday’s program, which also includes the FANSFund Dash for invited drivers and a full show for Cedar Lake’s weekly Late Model division, is scheduled to begin with hot laps at 6:30 p.m. CT. Racing is set to get the green flag at 7 p.m. CT.