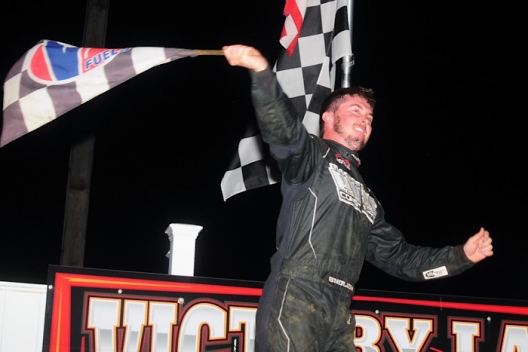 With race-dominating Kent Robinson of Bloomington, Ind., swept aside with three laps remaining, Tanner English of Benton, Ky., and Josh Rice of Verona, Ky., had a lead-swapping battle the rest of the 50-lapper with English edging Rice at the checkers for a $10,000 payday.

"I just love this place and look forward to coming back here every time," said the 27-year-old English, who fielded his family-backed No. 96 Longhorn Chassis at Brownstown. "The track was probably better than I've ever seen it. We were top and bottom and middle and all over. You could pass anywher. It was just awesome. I can't thank Brownstown enough for putting this deal on."

The 11th-starting English officially led the final two laps while Rice, who led only lap 48, settled for second. Robinson, who took the lead from Greg Johnson on a lap-four restart, was third after leading 43 of 50 laps while Johnson, of Bedford, Ind., and Jonathan Davenport of Blairsville, Ga., rounded out the top five.

Heat winner Devin Gilpin of Columbus, Ind., was in contention for much of the race, but he spun in turn two while trying to get under Davenport on lap 43, collecting Jacob Hawkins of Fairmont, W.Va., while they held the fifth and sixth spots.

Robinson kept his flurry of challengers in check most of the way, but when the young Kentuckians began knocking on the door following the final restart, he couldn't hold them off.

Rice made up his ground in the high groove, but after Robinson clicked off lap 47, Rice dove under the leader entering turn one to take command. The low-running English took advantage and followed Rice past Robinson on the other end of the track, and before Rice could settle into the top spot, English drove underneath to take control on lap 49.

Rice pulled back even with English on the final lap, but English's low groove was better in giving him the victory.

"When Josh slide in there and did that slider, it kind of messed up Kent," English said. "I was licking my chops. I was just waiting for Kent to mess up the whole race, and that's what did it. I just tried to take advantage of it and make two perfect laps after that — it was pretty tough."

Rice, who has had his share of near-miss victories in 2020, thought he had this one in the bag after working past Robinson.

"(With) seven (laps) to go on that last restart or whatever it was, I was like ’I've gotta go for it ...’ I thought I was going to go off the edge a couple of times in (turns) three and four," the 21-year-old Rice said. " Once we got to the lead, man, I was like, ’Man, we've got it.’ I wasn't ready for Tanner to come up through there. I wish I could redo them last two laps. I'd have probably moved down and tried to block, but it is what it is.

"We're here. We're still contending for the lead. This is like $35,000 I've lost within a matter of six laps. Yeah, this one is going to sting a little too, but congrats to Tanner, man, he did an awesome job. I followed him all the way to the front until we had that last caution."

Robinson held on as long as he could, but his car wasn't performing as well in the late stages of the event.

"That's racing, man, I can't complain. You hear everybody say when you're out front, (you're) kind of a sitting duck," Robinson said. "I couldn't see my crew guy at all, so I had no idea where anybody was at. I knew Josh was on the top — I mean, he likes being up there — but my right-rear tire, I was probably a little too hard on it early, and I felt like I was on ice skates there at the end.

"I'm not going to complain. We came here with a different setup. I haven't been that good here all year, so I feel like we made improvements and just didn't know what to do for the feature. As it went, it got freer, and just (felt like) I was on ice skates. ... It was a lot of fun ... we're here to win, so I'm not happy."

The feature was slowed by three cautions, including for Gilpin's lap-43 spin. The others appeared when Marty O'Neal spun in turn three for a lap-three yellow and Shelby Miles slowed on lap 34.

English is the leading rookie on the Lucas Oil Late Model Dirt Series driving for Illinois-based Riggs Motorsports, but he was back in his own. No. 96 at Brownstown, a car prepared by former racer Terry English and longtime crew member Justin English. English also thanked fellow Kentucky driver Dylan Thompson for loaning him a tow rig.

"I gotta thank my dad and my brother, they put in a ton of work on this thing. I hardly ain't done nothing," English said. "I came and put my seat in it, and that was about it. I've gotta thank them."

Notes: English previously won the Hall of Fame Classic in 2017. ... Runner-up Josh Rice rolled his race car in turn four in his last visit to Brownstown, but his 2-race-old car carried him to his best finish at the quarter-mile fairgrounds oval. "I wished we could've pulled it off. It would've been cool," he said. Brownstown is typically hard on him, "but it was good tonight," he added. ... Greg Johnson led the first three laps but fell completely out of contention most of the way before working his way back to fourth at the finish. ... Jason Jameson of Lawrenceburg, Ind., was the fast-timer in the first heat, but he retired after just a few laps in the prelim after starting on the pole. ... Zak Blackwood's car was smoking throughout prelims and he pulled to the infield during his heat race; he transferred to the feature through a consolation race. ... Greg Williams of Haubstadt, Ind., a former regular at his hometown Tri-State Speedway, is making a rare appearance in competing with his son Lee; neither made the feature. ... Brownstown's next major Late Model event is the 41st annual Jackson 100, a $15,000-to-win Lucas Oil Late Model Dirt Series event scheduled for Sept. 26. ... Brownstown's Hall of Fame inductees were 1980-90 flagger Rick Haven and former racer Ted Pfeiffer Sr.