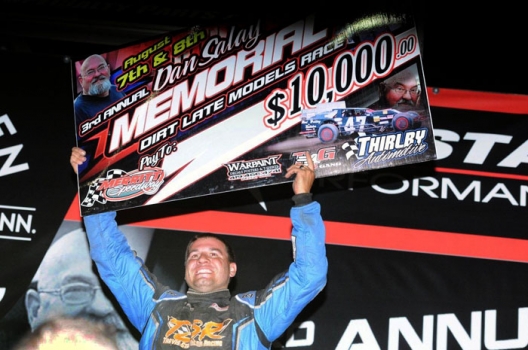 This one was by far the biggest of the bunch.

Stemler of Ionia, Mich., led all 75 laps from the outside of the front row in Saturday's Dan Salay Memorial to earn a career-high $10,000 victory at Merritt’s Wood Tic weekend.

The victory continued Stemler’s successful first season with Freeland, Mich.-based Anklam Racing. The team has been unbeatable no matter the track and no matter the car in recent weeks with his five wins coming at four different tracks while splitting time between two different chassis brands.

After debuting a new Longhorn Chassis the previous week, Stemler was back in the team’s XR1 Rocket at Merritt.

"This car is just amazing,” said Stemler, whose five-race win streak also includes a pair of $3,000 Allstar Performance triumphs at Merritt and Tri-City Motor Speedway in his Rocket and a pair of weekly wins at I-96 Speedway and Thunderbird Raceway in his Longhorn. “I’m having a great time. I'm having fun again and loving racing. It’s a dream come true man.”

While he led the race’s entire distance, Stemler had anything but smooth sailing during his winning run. His torrid pace during the opening laps put him in heavy traffic early in the race, allowing both David Mielke of Gladwin, Mich., and Rusty Schlenk of McClure, Ohio, to mount early challenges.

Schlenk looked under the high-running Stemler on numerous occasions during the race’s first 25 laps, but he saw his chance to win slip away when he slid over the turn-two banking on a lap-27 restart; he recovered to finish 10th.

Assuming the second spot after Schlenk’s demise, Mielke chased Stemler through the race’s middle portions before fading to sixth in the final 10 laps.

Stemler then had to turn back two more challengers in the race’s closing laps with both Van Wormer and Spangler moving forward. The three cars battled hard through the closing laps with Spangler pulling even with Stemler for the lead on lap 70. But Spangler couldn’t complete the pass and slid back to third over the final four laps.

Van Wormer mounted his challenge next, dicing through traffic to pull within striking distance on the final lap. But Stemler held his line on the last circuit and kept just enough of a gap between himself and slower cars to avoid any trouble.

“I was starting to lose my times and I could feel it,” Stemler said of his late battle with Spangler and Van Wormer. “I started searching, and I was like ‘I just gotta man up and wheel it.’”

The race was slowed by three cautions. The first yellow waved with 27 laps completed when Greg Gokey of Buckley, Mich., slowed. Schlenk’s miscue on the ensuing restart caused the second caution, and See Hilliker of Midland, Mich., brought out the final caution on lap 46.

Preliminary action for the event was held on Friday with Schlenk collecting $550 for setting fast time during qualifying. Spangler and Chad Finley of Lansing, Mich., split preliminary feature wins.