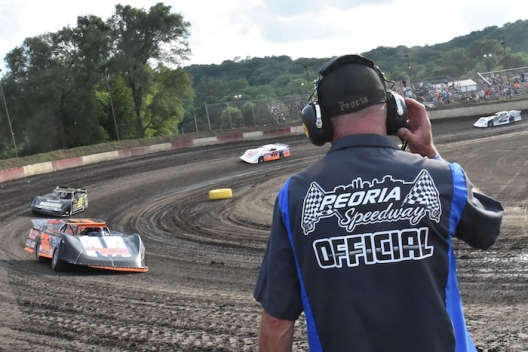 PEORIA, Ill. — Updates from Thursday’s second round of the DIRTcar Summer Nationals at Peoria Speedway with a $5,000-to-win event on the 26-race series (results unofficial):

With lightning dancing in the sky and winds kicking up in advance of an approaching thunderstorm, officials stopped the racing program after the completion of the UMP modified consolation and told fans to clear the grandstands. Rain began falling moments later and intensified into a full-fledged storm, forcing officials to postponed the remainder of the action — the Late Model consolation, 25-lap modified feature and 40-lap Late Model feature — to July 21. Rain on the rescheduled date further pushed the racing to July 30, and then continued rain that day forced officials to call it off a third time with a plan for a fourth attempt to be announced.

Billy Drake, the 2018 series winner at Peoria, was quickest in qualifying with an 11.603 lap. … Rich Bell of Sheffield, Ill., had a rollover in turn four with his car landing on its wheels. He was shaken up and checked on by emergency personnel but didn’t appeared to suffer any apparent injuries according to DIRTcar officials. The team is working on repair the car with hopes of starting the feature. … Mike Chasteen Jr. missed his time trial after his transmission broke in hot laps; the team was making repairs and hoped to take the tail of the first heat.

DIRTcar Summer Nationals Late Models were scheduled to hot lap at 6 p.m., but after a lengthy attempt to pack the track, they were sent off the track about 6:45 p.m.  because the inside groove was still too wet. Officials swapped up the hot-lapped order and sent the crate modifieds out to hot-lap. … Johnny Scott of Las Cruces, N.M., is among Peoria’s entrants and is scheduled to run the next four series events. He’s among just three non-Illinois entrants along with Tyler Carpenter of Parkersburg, W.Va., and Tegan Evans of Clinton, Iowa. … Ryan Gustin was slated to follow the series but he was a no-show at Peoria after competing in Brownstown (Ind.) Speedway’s opener. … Four of the last five Summer Nationals winners at Peoria are entered (Brian Shirley, Shannon Babb, Billy Drake and Bobby Pierce).