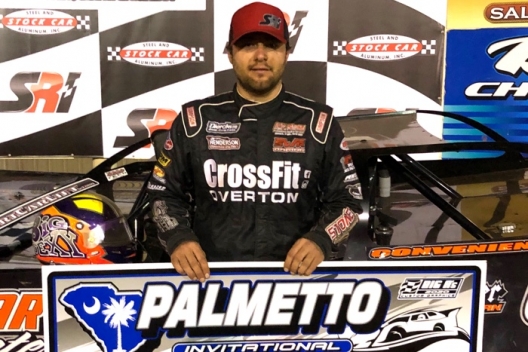 The driver who benefitted from the turn of events? Brandon Overton of Evans, Ga., who overtook Casey Roberts of Toccoa, Ga. — the leader since the second circuit — with the white flag waving to capture the 60-lap Palmetto Invitational and a $10,000 top prize.

Exactly how Overton, 29, executed his deciding pass to claim the first five-figure Dirt Late Model winner’s payout since the racing world was shut down in mid-March by the coronavirus pandemic became the story of the evening.

It appeared, of course, that Overton was headed toward a runner-up finish to the 43-year-old Roberts, who grabbed the lead from Anthony Sanders of Charlotte, N.C., on lap two and held strong to it through five restarts. Overton stayed steadily within a few car lengths of the pacesetter, but, aside from a stiff challenge he mounted in turn two on lap 55, couldn’t seriously threaten Roberts.

With the 3/8-mile oval’s surface effectively single lane — the top five running order was the same for laps 10-59 — Overton didn’t have many options. But on the last lap Overton’s eyes widened when he saw Roberts enter turn one higher than he had throughout race, opening the door for Overton to fill the gap with his David Wells-owned Longhorn Race Car.

Overton raced off turn two side-by-side with Roberts. The two drivers’ cars made contact on the backstretch, Overton surged ahead, and then Roberts made an attempt to dive back underneath Overton in turn three but instead clipped the inside berm and wildly spun around and out of contention.

As Roberts’s twirled to a stop on the outside of turn three with his Wynn Motorsports Longhorn car’s nosepiece crushed, Overton sped off to take the checkered flag 1.014 seconds ahead of Gray Court, S.C.’s Chris Madden, who narrowly avoided Roberts’s spinning car.

After climbing out of his car in victory lane to celebrate his second win in as many nights, Overton knew he had been embroiled in a controversial finish. But he considered what transpired a simple matter of hard racing for a rich prize.

“Hey, we got to together,” he added. “I’m sure he’s pissed off, but I don’t know what you do. I don’t know. I don’t ever want to see somebody lead the whole race and lose it on the last lap, but hell … what do you do?”

Overton relished what capped a superb resumption of competition for him and his Wells Motorsports team. He began his three-race weekend with a fifth-place finish on Thursday at Tri-County Racetrack in Brasstown, N.C., and scored a $6,335 Carolina Clash Super Late Model Series triumph on Friday at Lancaster (S.C.) Motor Speedway.

The victory was Overton’s fourth overall of 2020. He previously swept the Feb. 7-8 unsanctioned Winter Freeze at Screven Motor Speedway in Sylvania, Ga., for a cool $30,020 in earnings.

“I’m just glad my car’s been good here lately, the last couple nights here,” said Overton, who started fifth at Cherokee and wrestled second place from Madden on lap 10. “I can’t thank everybody enough for all the help, all the support.”

Roberts, who started from the outside pole alongside Sanders, limped his damaged car into the infield after his final-lap heartbreak and quickly emerged from the cockpit. He walked with his wife toward the scales but did not confront Overton.

Outland asked Roberts for an interview on Speed51.com’s live broadcast, but Roberts, who was credited with a 14th-place finish, declined to comment.

Notes: Spectators weren’t allowed in the grandstands for the race due to limits on the sizes of gatherings amid the coronavirus crisis. All entered teams were also limited to five members and haulers were spaced apart in the pit area to promote social distancing among attendees. … Anthony Sanders, who led the race's first lap, was initially listed as finishing 14th due to a transponder scoring error. He actually crossed the finish line in fifth place. … Jonathan Davenport was never a factor as he managed to climb forward from the 12th starting spot to finish seventh. … Lanigan’s race ended due to nose damage his Viper Motorsports BWRC house car sustained in the lap-33 restart scramble. The two-time Blue-Gray 100 winner was collected in the jingle after returning to the track from a pit stop to change a left-rear tire. … Non-qualifiers included Tyler Millwood, Doug Sanders, Brian Ledbetter, Larry Grube, John Price, Benji Hicks, Trent Ivey, Adam Yarbrough, Bryson Harper and Colton Flinner.