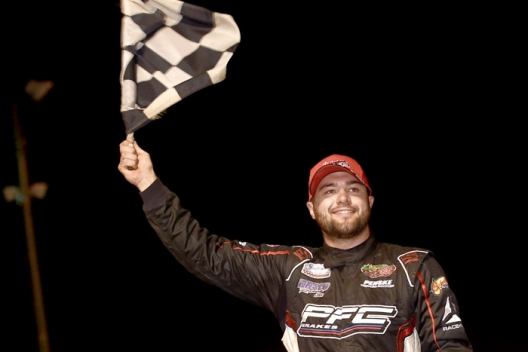 The third-starting Overton used a lap-four restart to shoot by front-row starters Ross Bailes and Chris Madden and never looked back. He cruised to his fifth victory in eight races on this year’s Southern Nationals tour and in doing so completed a sweep of the tour’s four-race Peach State swing.

“I rode around for a little bit just trying to move around and see what I had to work with,” Overton said of the race's opening laps. “I had already hit the bottom down there in one and two and it felt really good. When (Madden) chose the outside (for the restart), I knew I could probably get a good run.

“My car’s just been good. We’ve had no distractions. Nothing’s been breaking and we haven’t tore anything up. We’ve been able to just focus on making our car go fast."

Overton took the checkereds 4.411 seconds ahead of Michael Page of Douglasville, Ga., who overtook Madden of Gray Court, S.C., on the final lap to finish second. However, Page was penalized two positions in the final rundown because a part failure caused his car to fail post-race inspection, according to series officials.

Madden was elevated to the runner-up finish with Bailes moving from fourth to third. Page was officially fourth with 13th-starting John Baker of Norman Park, Ga., rounding out the top five.

Page’s car had visible damage to the front end that was causing the left side of his car’s nose to drag the ground. Page didn’t believe the damage hampered his efforts much during the race, but he surmised that the problems were likely what caused his car to fail to meet required measurement specifications after the race.

“We had a pretty good car, but it just took a little bit to get it going,” Page said. “With the car up on the bars, I really couldn’t tell (it was damaged). There was a few times it would do something that didn’t seem right but for the most part I couldn’t tell it.”

Madden, the five-time series champion who led the points through the first half of the tour, fell further behind Overton in the title chase after entering Sunday 16 points behind Overton.

“We struggled a little bit tonight in the slick conditions," Madden said. "It’s the first time we’ve had that car in these kind of conditions and we definitely missed it.

"Brandon’s on top of his game right now, so if we miss it he definitely embarrasses us.”

The race was slowed by two cautions with the first coming on lap four when Wil Herrington got into the back of Jake Knowles in turn four, sending Knowles around and collecting J.R. Moseley, Jimmy Sharpe Jr. and Dalton Polston. Frank Ingram slowed to caused the second caution with 25 laps complete.

With eight of 12 series races completed, the Southern Nationals will take a day off on Monday before heading to Tri-County Racetrack in Brasstown, N.C., on Tuesday for another $3,500-to-win event.

Notes: Overton earned the 18th Southern Nationals victory of his career. … In his four-race win streak, Overton has won a total of $27,106 in first-place winnings. His wins came at Senoia Raceway on Thursday, Needmore Speedway on Friday and Screven Motor Speedway on Saturday. He earned an additional $10,053 for his July 11 victory at Wythe Raceway. … Overton’s five wins on this year’s tour is one short of equaling the current for the most wins in a single season held by Chris Madden, who won six out of nine races in 2007. … Fourteen cars were running at the finish of Sunday’s feature with 12 cars on the lead lap.

Ross Bailes of Clover, S.C., unloaded his backup car after hot laps and put it on the pole. Bailes laid down a lap of 14.126 seconds around Cochran's 3/8-mile oval, earning fast time honors on the night and grabbing the first starting spot for Sunday's 35-lap feature. ... Chris Madden of Gray Court, S.C., was fastest in the other quaifying group with a lap of 14.552 seconds. He'll start from the outside pole of the feature. ... The top four qualifiers from each group will make up the first eight spots in the feature, while all other cars will run a consolation race to determine their starting spots. ... Second-starting Mark Whitener held off a hard-charging Wil Herrington in leading every lap of the 10-lap consolation race. Herrington settled for second after starting fourth. The race was slowed midway through when Parker Martin slid over the banking in turn four.

After a hot afternoon with clear, sunny skies, the program was delayed nearly 90 minutes in an effort to avoid dry track conditions. … Steven Roberts of Sylvester, Ga., is making his third appearance on this year’s tour. He finished third at Senoia on Friday before having engine problems at Needmore on Friday and skipping Saturday’s race at Screven. Frank Ingram of Woodstock, Ga., and J.R. Moseley of Columbus, Ga., are among drivers making their first appearance on this year’s tour. … Ross Bailes went to a backup car after hot laps. … Super Late Model rookies Pearson Lee Williams of Dublin, Ga., and Will Herrington of Cochran, Ga., both consider Cochran their home track.

The Schaeffer’s Southern Nationals wraps up a stretch of four straight nights of racing in the Peach State with its first ever visit to Cochran Motor Speedway. Sunday's $3,500-to-win event features qualifying, consolation races and a 35-lap main event.

The date at Cochran was a change from the tour’s original schedule. The 3/8-mile track was added as a replacement for Rome (Ga.) Speedway, which is closed while being resurfaced and updated.

Brandon Overton of Evans, Ga., enters the event with a 16-point lead over five-time series champion Chris Madden of Gray Court, S.C. Overton is looking to complete a sweep of the tour’s swing through his home state after winning at Senoia Raceway on Thursday, Needmore Speedway on Friday and Screven Motor Speedway on Saturday.

Sunday’s event is the eighth race in the 12-race summer tour through the Southeast, which launched on July 10 at Smoky Mountain Speedway in Maryville, Tenn. After Cochran, the series takes a day off before heading to Tri-County Racetrack in Brass-town, N.C., on Tuesday and wrapping up with a Tennessee tripleheader Thursday through Saturday.