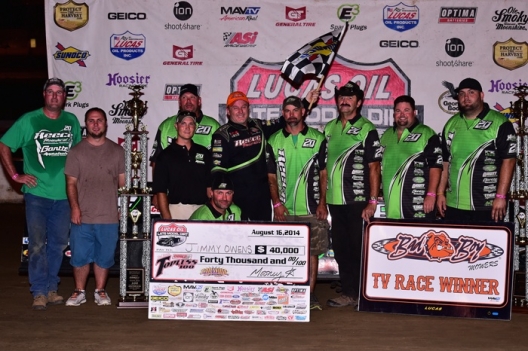 “It’s pretty awesome,” Owens said. “When we practiced we had a good car … we kind of dialed ourselves out in the heat race. But we was able to get a good second place finish. We just changed a few things there for the feature.

“As soon as they throwed the green I was able to maneuver and turn the car real good. You just had to kind of bide your time and take care of your tires and all that stuff to be there at the end.”

The Lucas Oil Late Model Dirt Series points leader was able make gains on the race leader as the pair approached lapped traffic, but several cautions slowed the pace. Owens took control of the race with less than 20 laps remaining in the 100-lap distance.

Owens led much of last week’s Sunoco North-South 100 at Florence Speedway before dropping back with a flat tire with only a few laps remaining in the crown jewel event.

While he’s pleased to add another Topless 100 victory to his resume, Owens said he’s just having fun.

“I really wanted to get that fourth North-South,” Owens said. “I was really proud that Eddie (Carrier Jr.) won. We just want to race and have a good time. Win, lose or draw, it’s all good. I just love it and love doing what I’m doing. I’m just glad to be here and when you win, it’s just an extra bonus.”

Dale McDowell of Chickamauga, Ga., charged from the 11th starting position, sliding by Jonathan Davenport of Blairsville, Ga., for the runner-up spot with only two laps remaining in the 100-lap event. Davenport finished third, with Scott Bloomquist of Mooresburg, Tenn., rallying from the 23rd starting spot to take fourth. O’Neal rounded out the top five.

10:16 p.m. Erb draws another caution on lap 70 when he slows on the racetrack. O'Neal continues to lead. Bloomquist is up to fifth after starting 23rd.

10:07 p.m. Babb draws a lap-54 caution after a collision with fourth-running Davenport. He does not return to the racetrack. Steve Francis and Eddie Carrier Jr. go to the hot pit under the caution. Scott Bloomquist is up to 10th after starting 23rd.

10:04 p.m. Wallace jumps to the second place spot on the restart, with Babb moving to fifth. O'Neal, Wallace, Owens, Jonathan Davenport and Babb make up the top five with 50 laps in the books.

10:00 p.m. Dennis Erb Jr. draws a caution with a right-rear flat. Second-running Owens was closing in on O'Neal in lapped traffic. Fifth-running Moyer, Billy Moyer Jr., Bub McCool and Terry Phillips all go to the hot pit under the yellow. Moyer exited the racetrack to his trailer.

9:52 p.m. Robbie Stuart spins in turn four to draw a lap-34 caution. Shannon Babb has advanced from 17th to the ninth-place spot.

9:50 p.m. Seventh-starting Owens passes Moyer on the low side on lap 27 to take second. O'Neal leads, Owens, Moyer, Taylor and Wallace make up the top five.

9:45 p.m. Tommy Surrett slows in turn one for a second caution on lap 23. Jason Papich goes to the hot pit and does not return to the racetrack. O'Neal remains the race leader.

9:36 p.m. Outside polesitter Brian Birkhofer hits the backstretch wall on the first lap. He retired to the pits. Earl Pearson Jr. pulled into the hot pit.

9:28 p.m. Following introductions, drivers are given the call to fire their engines.

Outside polesitter Earl Pearson jumped to the lead at the drop of the green and led all 15 laps to transfer to the 100-lap feature. Runner-up finisher Robert Baker challenged Pearson in the early running, but wasn't able keep pace with the race leader. Baker transfers to the feature event, with Jeff Taylor finishing third. The race was brought to a complete restart after Tony Jackson Jr. spun in turn four on the first lap to draw a caution. A second yellow flew on lap 11 when Will Vaught slowed in turn two. Anthony Burroughs spun in turn four for a third caution on the 12th lap.

Polesitter Robbie Stuart led all 15 laps to transfer to the main event.  Jack Sullivan finished second for the final transfer spot, with Lucas Oil Dirt Late Model Series regular Dennis Erb Jr. taking the third place spot. Last week's North-South 100 winner Eddie Carrier started on the outisde pole, but slipped to fourth on the initial start, eventually slowing around the bottom of the racetrack and pulling off after 10 laps. A caution flew on the second when Shannon Scott spun on the backstretch. Jeremey Payne retired to the pits with a flat tire; Jake Davis also exited the racetrack.

The weekend's fast qualifier Stacy Taylor of Jacksonville, Ark., will start on the pole of Saturday’s feature event after winning his heat race and drawing the first starting spot in the redraw.

Saturday’s program will include two 15-lap consolation races, with the top two finishers from each race qualifying for the 100-lap feature. Provisional starters will make up the final two rows of the feature lineup.

The 63-car turnout is the biggest since the event drew 73 cars in 2010. … Stacy Taylor of Jacksonville, Ark., considers Batesville Motor Speedway his home track. “I guess you just do the best you can, and try to stay in front now,” he said Friday night after he drew the pole for Saturday’s 100-lapper. … Nine former Topless 100 are already locked into the main event. … Scott Bloomquist, a four-time Topless 100 champion, will start in the 10th row of the first consolation after experiencing mechanical issues in his heat race. … Hometown driver Billy Moyer is the only other four-time Topless 100 winner. He drew the fourth-place starting spot in Friday’s redraw. … Jonathan Davenport of Blairsville, Ga., will start sixth in Saturday’s main event. He's looking to break his recent stint of bad luck, after rallying to finish third in Wednesday’s Carolina Clash event where a late-race flat-tire sent him to the rear of the field. … Last year’s Topless 100 winner Terry Phillips of Springfield, Mo., finished third in his heat race and will start from the outside of row eight … Saturday’s Topless 100 finale at Batesville includes another full modified program.