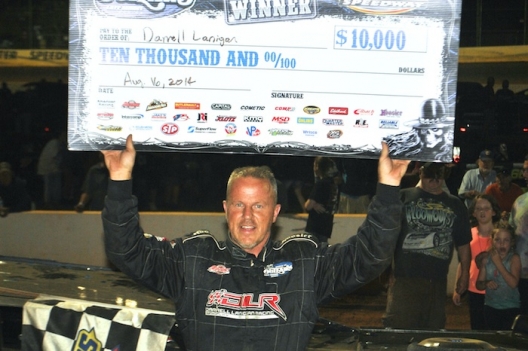 Kevin Kovac/DirtonDirt.com
Darrell Lanigan displays the big check he received at Winchester.
What won the race: WoO points leader Darrell Lanigan of Union, Ky., overtook Tim McCreadie of Watertown, N.Y., with six laps remaining Saturday to win the Gunter's Honey 50 at Winchester Speedway, his 12th series victory of the season. McCreadie settled for second while Dan Stone, who led the first 21 laps, was third.
Quotable: "You gotta be smooth on the throttle, you gotta have a good handling car and you gotta have traction," Lanigan said of the key to success at the slick, high-banked Winchester oval. "We had all three tonight."
Key notes: Just one caution flag slowed the feature, on lap 47 when Billy Beachler stopped in turn two. ... The four 10-lap heats took nearly 45 minutes to complete because a red flag was thrown during the fourth event so the track ambulance could cross to the infield to tend to someone from a support-division team. ... After adding a win last night at Potomac Speedway to his third-place finish on Thursday at Delaware, Austin Hubbard opted to rest on his laurels and skip the finale of the weekend WoO tripleheader.
On the move: After winning a consolation race, Eric Wells advanced from the 18th starting spot to finish seventh.
Winner's sponsors: Lanigan's Club 29 Race Car has a Cornett Racing Engine and sponsorship from Baird Trucking, Gotta Race, Hoosier Racing Tire, Keyser Manufacturing, Performance Rod & Custom and Xtreme Graphics.
Points chase: Lanigan extended his commanding points lead to 262 points over Rick Eckert and 304 points over Tim McCreadie.
Car count: 34
Fast qualifier: Darrell Lanigan
Time: 16.065 seconds
Polesitter: Dan Stone
Heat race winners: Darrell Lanigan, Jamie Lathroum, Rick Eckert, Dan Stone
Consolation race winners: J.T. Spence, Eric Wells
Provisional starters: Shane Clanton, Clint Smith
Next series race: August 22, I-96 Speedway (Lake Odessa, MI) $10,000
Editor's note: Results and race details are unofficial.
By Joshua Joiner
World of Outlaws Late Model Series

WINCHESTER, Va. (Aug. 16) — After starting the weekend with a pair of runner-up finishes, Darrell Lanigan returned to his preferred top spot Saturday at Winchester Speedway with a victory in the World of Outlaws Late Model Series-sanctioned Gunter's Honey 50.

Lanigan, the two-time WoO LMS champion and current points leader, earned $10,650 for his series-leading 12th victory of the season as the national tour wrapped up a three-race weekend in the Mid-Atlantic region. The tour's all-time winningest driver earned his 65th career series victory in front of a near-capacity crowd at the northern Virginia track.

Advancing from his fourth starting spot, Lanigan, 44, of Union, Ky., overtook Tim McCreadie of Watertown, N.Y., on lap 44 of the 50-lap race and pulled away in his Keyser Manufacturing-sponsored Club 29 Race Car on his way to claiming his first victory at Winchester's 3/8-mile oval.

"I don't like second," said Lanigan, who settled for runner-up finishes Friday night at Delaware International Speedway in Delmar, Del., and Saturday night at Potomac Speedway in Budds Creek, Md. "It's always better to win, especially here at Winchester where we've struggled. To come here with our Club 29 car and get a win, it's awesome."

McCreadie, the 2006 WoO LMS champion who sits third in the current series standings, settled for second in his Sweeteners Plus Rocket Chassis, 2.360 seconds behind Lanigan at the finish. McCreadie started from the outside pole and took the lead from polesitter Dan Stone of Thompson, Pa., on lap 22.

Thompson's Stone's Excavating Rocket was third at the finish after riding out front for the race's first 21 laps. Rick Eckert of York, Pa., was fourth in the Rocket Chassis house car with Kenny Pettyjohn of Millsboro, Del., rounding out the top five in his Rocket car.

Lanigan made his way to third early in the event and rode patiently in the spot through the race's opening laps as Stone paced the field ahead of McCreadie. When McCreadie began to pressure Stone in traffic around lap 15, Lanigan closed in on both drivers to make it a three-car battle for the lead.

After taking several looks under Stone in traffic, McCreadie pulled ahead for the lead on lap 22 as Lanigan looked to take second. Lanigan overtook Stone on lap 27 and erased what little advantage McCreadie had built in just a couple of laps.

Lanigan pressured McCreadie as the leaders raced through heavy traffic, pulling alongside multiple times before finally completing the winning pass when McCreadie slipped high on lap 44.

The race's only caution on lap 47 gave McCreadie a chance to challenge Lanigan on a late restart, but Lanigan pulled away in building nearly a straightaway advantage before the finish.

"I was just biding my time a little bit," Lanigan said of his battle with McCreadie. "I didn't want to press the issue and take us both out. When your car's good like that you can move around, so I was just kind of waiting on him there until I finally got a good groove going.

"I raced him clean and he raced me clean. It was definitely a good race. It's fun when you can race with people like that that you trust to run around."

McCreadie was happy to improve on his finishes of 11th and fourth on Friday and Saturday, but was disappointed to come up short of the victory.

"I must've been fading. I just tried to go where the track felt the best," said McCreadie, a two-time WoO winner who recorded his fourth runner-up finish of the year. "It's tough to run second, but it's better than we were all weekend. I'll take it and hope we put on a good show for everybody.”

After dropping back to third, Stone switched grooves and rallied back to pressure McCreadie for second late in the race. He felt that his car was capable of winning the race if he had found the quicker way around the track sooner.

"The track was faster at the beginning there and I was really good," said Stone, a WoO part-timer who was looking for his third career series victory. "I think the track slowed down, but I didn't slow down enough with it. I was gauging myself off those lapped cars, but obviously those guys were real fast behind me. I just slipped up there for probably 10 laps and messed up.”