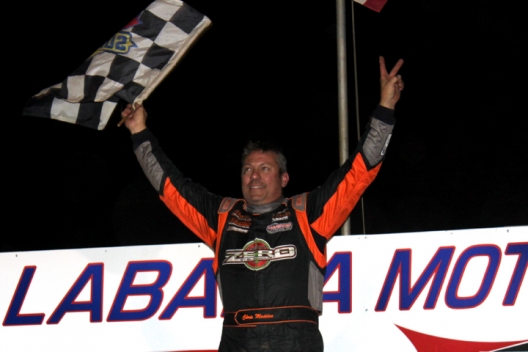 PHENIX CITY, Ala. (Nov. 3). — Rallying from deep in the field, Chris Madden of Gray Court, S.C., overtook polesitter and race-long leader Tyler Erb on the 52nd lap Sunday at East Alabama Motor Speedway and led the rest of the way to win the 45th annual National 100. Madden, who started 23rd in the main event thanks to a broken transmission in his heat race on Saturday, didn’t rush his charge forward, even though he managed to complete his run from the back to the front in just over half of the century grind.

“The main thing was being patient and staying out of trouble,” said Madden. “That’s the main key to it and we was able to do that. The racetrack was great you know … (we) were able to maneuver around. It was just our night. We made all the right adjustments, had a good race car and was able to get it to the front.”

After giving up the lead, Erb, of New Waverly, Texas, turned back a number of challenges to hold on to the runner-up spot. Fourth-starting Devin Moran of Dresden, Ohio, was among the drivers who pressured Erb, running as high as second behind Madden before eventually settling for third behind the wheel of Alabama car owner Tommy Pope’s No. 22.

Still looking for his first National 100 win since 2003, Hall of Famer and eight-time event winner Scott Bloomquist of Mooresburg, Tenn., finished fourth after making multiple pit stops. Bloomquist was never a threat after being involved in an early scrape and slipping from his sixth starting spot to the rear of the field, though he did make an impressive rally from the back of the pack after stopping for a right rear tire and a right front shock adjustment late in the grind.

Seventh-starting Dennis Erb Jr., of Carpentersville, Ill., who made a low-side charge early on the race, completed the top five. Erb Jr. briefly took the lead away from Tyler Erb on lap 21, but never led a lap officially as Tyler Erb managed to edge back ahead at the line. The 2016 National 100 winner slipped back to seventh before making his way back to fifth.

Madden, who was up to third by lap 32 before taking second following a lap-37 restart, cooly stalked Tyler Erb for a dozen circuits before surging ahead. After grabbing the lead he pulled away to win his second career National 100 by 1.955 seconds while earning $15,000.

After getting by Joseph Brown of Columbus, Ga., for second, Madden quickly caught the leader but had to abort his bid for the lead when he and Erb nearly got together.

“(Erb) was able to turn his car off the top (of the track) and rotate off the top. I was in the middle and when he made the rotation off the top and come back down, I had to check up,” said Madden. “Which, he had his momentum going and he had the preferred line and he was leading the race. So it would’ve been my fault if I’d drove in there and took him out. He drives me clean and I drove him clean and we put on a good show for the crowd.”

Madden regrouped and never let Erb get too far ahead. Following a restart on lap 50, he made his move.

“I had got me a run on the top side … he spun his wheels off of (turn) four and that was able to give me the speed that I carried by him into (one) and I was able to clear him down there,” said Madden. “That was kinda the key thing … get in the lead and set my own pace.”

Erb, who was making his first-ever National 100 start, said the cautions — a dozen yellows slowed the 100-lapper — were a killer.

“I just hated all the cautions. I wasn’t very good on restarts,” he said. “It would take me about four or five laps to get a good rhythm. Even when I was behind Madden and we were lapping cars, like I had a pretty good rhythm and he got about a straightaway or three quarters of a straightaway (ahead) and then it’s like we went the same speed for 10 laps and then we’d have a caution.

“I think the guy out front was definitely at an advantage, but … just, I didn’t restart very well when I was out front. I needed to try to change it up or do something, but you just really don’t know. You can only picture what’s behind you so much. But it’s part of it … it’s experience here.”

Making his third career National 100 start and first since finishing 12th in 2016, Moran chased both Erb and Madden. He ran as high as second while hanging around the top-five throughout the race.

“I’d like to thank Tommy Pope Construction for allowing us to come out here and race and have a good solid top-three run. We watched some videos this week, and, like I said we didn’t quite get the job done, but a top three, we’ll take it after not getting to run this car since (winning) last year (at Whynot Motorsports Park in Meridian, Miss.).”

Notes: Madden previously won the National 100 in 2007. … After running as high as second, Joseph Brown had a flat left-rear tire on lap 41 while running fifth; he retired. ... Steven Roberts spun out of the fourth spot on lap-87 in turn four but came back to finish sixth. ... Third-starting Brandon Overton spun exiting turn two on the second lap, collecting Scott Bloomquist; Overton's car left on the hook. ... Outside front-row starter Austin Horton retired with apparent right-front damage on the second lap as well. … A red flag appeared on the 68th lap when Jay Elliott of Phenix City, crashed over the turn-four banking; he was apparently unhurt.

Polesitter Tyler Erb of New Waverly, Texas, is making his first appearance at East Alabama. While looking for his first career National 100 victory, he’s also chasing his first win in a 100-lap main event. “This is kinda the kind of racing I’m used to down in the south. I haven’t got to do it much in the last two years (while following national tours). (Chris) Madden and Scott (Bloomquist), they’re gonna be good in a 100-lap race and even the locals, Austin Horton, I think he won he second heat … guys like that. You know, it’s just another race for us. We’re gonna do everything we can to win.” … Chris Madden of Gray Court, S.C., dropped out of his heat on Saturday night while running second. A broken transmission was the culprit. Madden’s team made repairs and will start 23rd in the 100-lapper. … After winning a thrilling third heat over Scott Bloomquist on Saturday, Brandon Overton of Evans, Ga., will start third in the feature. Overton passed Bloomquist for the lead when Bloomquist caught a slower car, but the Hall of Fame driver turned back under Overton to regain the lead before Overton rallied for a last-lap pass. “I felt like I was getting better. I had him getting into (turn) one and I bottomed out real bad and I was a little gun shy,” said Overton. “Once I got my confidence back up I started reeling him in anyway.” … Christian Hanger of Winchester, Tenn., is the lone addition to Sunday’s program. Hanger finished fourth at Clarksville (Tenn.) Speedway on Saturday while debuting a new Rocket XR1. Hanger, who finished 10th in the rescheduled 44th National 100 back in January, will start 27th in the feature. … While most were loaded up for the night, Patrick Michel of Belle Chaise, La., was still working on car’s engine. Michelle had the intake off the engine as he worked to diagnose the problem, which he hoped to have solve before Sunday’s feature. Unfortunately he was unable to solve the issue. … There are three former National 100 winners in the field, with 2016 winner Dennis Erb Jr. of Carpentersville, Ill., the most recent. Erb joins Madden (2007) and eight-time winner Scott Bloomquist of Mooresburg, Tenn.

Going out early in the session, Tyler Erb of New Waverly, Texas, toured East Alabama’s 3/8-mile oval in 15.335 seconds to set the fast time for the 45th annual National 100. Erb was quickest among 26 entries for the annual event that pays $15,000-to-win and topped three former National 100 winners. Chris Madden of Gray Court, S.C., the 2007 winner, was second quick with a time of 15.361 seconds, while eight-time Nationals 100 winner Scott Bloomquist of Mooresburg, Tenn., was next at 15.524.