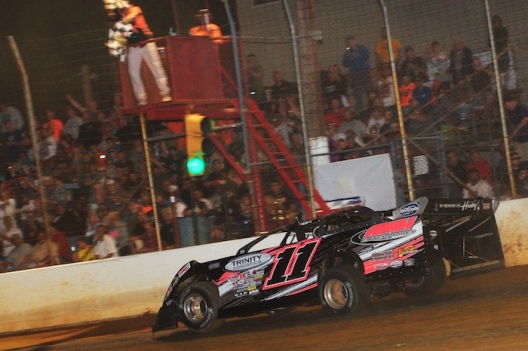 BUDDS CREEK, Md. (Aug. 15) — Austin Hubbard may no longer race nationally, but he's still capable of competing with the best Dirt Late Model drivers in the country. The 22-year-old Seaford, Del., driver proved as much Friday night at Potomac Speedway with a dominating performance in the 3/8-mile oval's World of Outlaws Late Model Series event.

Hubbard, the former WoO LMS Rookie of the Year who followed the national tour full time in 2010 and 2011, claimed a victory worth $10,050 at the high-banked 3/8-mile oval, leading every lap from the pole starting spot to score his first series victory since winning twice on the series in 2010.

"This is a huge deal for us," said Hubbard, who has continued to compete part time on the WoO after scaling back his racing program in recent seasons. "I've always believed we could win these big races. We've got good cars and good people supporting us. I definitely know we can run with these guys and we proved it."

Hubbard's victory came in front of a standing-room-only crowd as Potomac Speedway welcomed the WoO LMS back for the first time since 2004 in hosting the second leg of the tour's tripleheader weekend in the Mid-Atlantic region.

Hubbard's MasterSbilt by Huey Race Car was fast all night. He set fast time in his group during Ohlins Shocks Time Trials and dominated his heat race before earning the pole through a redraw among the race's top eight starters. He cruised during the opening stages of the main event before turning back challenges from Darrell Lanigan of Union, Ky., through the middle portions.

Lanigan pressured Hubbard on a number of restarts, but Hubbard pulled away from Lanigan and third-place finish Gregg Satterlee of Indiana, Pa., during the race's closing laps to take the checkereds with an advantage of 1.120 seconds.

The performance continued a stellar weekend for Hubbard, who finished third in Thursday's WoO stop at his home track of Delaware International Speedway in Delmar, Del.

"I'm telling you, this car is on point. It's been that way all weekend," said Hubbard, who claimed his third overall victory of the season. "I don't have to do anything to it and it just goes right around there."

Lanigan, the two-time WoO LMS champion and current points leader, settled for his second runner-up finish in as many nights in his Club 29 Race Car. Satterlee, who topped Lanigan to claim Thursday's WoO event in Delaware, finished third in a Rocket Chassis. Tim McCreadie of Watertown, N.Y., and Chub Frank of Bear Lake, Pa., both also driving Rocket cars, were fourth and fifth respectively.

The victory was a special to Hubbard not only because of the competition it came against but also because of the track at which it came. With his previous WoO victories coming at Georgia's Screven Motor Speedway and North Dakota's River Cities Speedway, Hubbard was ecstatic to win a major event in front of many of his fans at the track where he claimed his first-ever Late Model victory.

"This means a lot," said Hubbard, whose race shop is roughly two and half hours from Potomac. "The first Late Model race I ever won was at this track and it's pretty cool to win a national tour race at this place, too. I love this crowd and this track. It's always a lot of fun to come out here.”

Lanigan entered the event hoping for a special moment of his own. The veteran racer scored the first of his series-leading 64 career WoO LMS victories at Potomac when the tour made its only previous visit to the track in 2004, but he was denied a return to the track's victory lane.

"I remember that race here," said Lanigan, who recorded his 20th top-five finish in 28 races this season. "It'd been nice to win here again. I really wanted to it, but second is a good points night. We'll take it and go on to the next one."

The race was slowed by seven cautions and saw a number of top runners fall by the wayside. Heat race winners Stevie Long of Mechanicsville, Md., and Keith Jackson of Edenton, Md., each gave up top-five spots, Long for an overheating engine on lap 14 and Jackson with a lap-44 spin. B-Main winner Dale Hollidge of Mechanicsville, Md., retired from a top-10 spot to draw a lap-21 caution, and Tim Fuller of Watertown, N.Y., slowed from 10th to draw a lap-35 yellow.